From Infogalactic: the planetary knowledge core
Jump to: navigation, search
For other uses, see Omen (disambiguation). 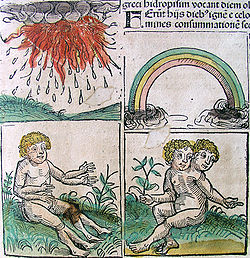 Examples of omens from the Nuremberg Chronicle (1493): natural phenomena and unnatural births.

An omen (also called portent or presage) is a phenomenon that is believed to foretell the future, often signifying the advent of change.[1] People in the ancient times believed that omens lie with a divine message from their gods.[2]

These omens include natural phenomena for example an eclipse, freak births of animals and humans and behavior of the sacrificial lamb on its way to the slaughter. They had specialists, the diviners, to interpret these omens. They would also use an artificial method, for example, a clay model of a sheep liver, to communicate with their gods in times of crisis. They would expect a binary answer, either yes or no answer, favorable or unfavorable. They did these to predict what would happen in the future and to take action to avoid disaster.[2]

Though the word "omen" is usually devoid of reference to the change's nature, hence being possibly either "good" or "bad," the term is more often used in a foreboding sense, as with the word "ominous". The origin of the word is unknown, although it may be connected with the Latin word audire, meaning "to hear."[3]

The oldest source for this practice in the Ancient Near East came from Mesopotamia. This practice attested at the first half of the 2nd millennium B.C., and it was vigorously pursued by the Assyrian kings, Esarhaddon and his son, Ashurbanipal in the 7th century B.C.[2]

There were 3 methods to interpret omens, and they were hepatoscopy (i.e. liver divination), lecanomancy, libanomancy. Hepatoscopy is to observe irregularities and abnormalities on the appearance of the entrails of a sacrificial sheep and they were used most in royal services.[2]

Astrological omens were popular in Assyria, during the 7th century BC. Diviners gained much influence by interpreting the omens and advising the king how to avoid the terrible fate during the reign of Esarhaddon (681-669 BC). One of the things they would do in Assyria was to put a substitute king on the throne, and the true king would hide for a while. The substitute king was expected to take the evil consequences and when they believed the danger is over, they would execute the substitute king and the true king will be back on the throne.[2]

This belief of omens later spread out around the Near East and beyond when we found liver models, the clay model of sheep livers use for the diviners to learn the craft, in Boghazkoi, Ugarit, Megiddo, and Hazor.[2]

Such practice was found in Israel as well. Compared to Israel, they used the methods listed above except, hepatoscopy. According to the bible, God didn’t answer King Saul through dreams, or Urim and Thummim, or prophets, before his final confrontation with the Philistines. Thus, showed that they have a similar belief and practice with their prophets, and dreams, and similar tool as Urim and Thummim.[2]

Letters from the city Mari dated at the latest from the 18th century showed that this divinatory practices were not limited to royal court, but also played an important role in everyday life of the people.[2]

An oionos(omen) was defined in antiquity as the carnivorous vulture, especially a prophetic bird. By careful observation of the bird’s cries and the way or direction it flew, the augurs attempted to predict the future. They also saw lightning or thunder as omens, sent from Zeus, and observed the direction in which they saw or heard them. Omens represented the divine will and the decisions of the gods, their positioning opposite human endeavors, and were aimed at being understood by sensitive receivers of the time, who brought the divine charisma to become intermediaries, channels between the world of gods and humans. Even since Homeric times, the Greeks paid special attention to these signs: when they saw vultures from the left, another symbol of Zeus, they considered it a bad omen. The cry of a heron or a lightning to the right marked positive and promising omen. In the Greek territory, seers also judged good and bad omens from the unwillingness or willingness of a victim to approach the altar and by the state of its offal when slaughtered.[4]

Ancient Roman religion employed two distinct types of professional omen readers. Augurs interpreted the flights of birds, while haruspices employed animal sacrifice to obtain the entrails necessary for divination. The Romans, besides drawing omens from birds, their species and flying style, as well as from lightning and sacrificial animals, paid special attention to a remarkable word or phrase uttered supposedly at random, but which carried a symbolic load and an essentially prophetic content. A widely known incident involved Emilios Paul, who heard his daughter saying that their dog Persa had died, and considered this phrase a good omen as to the campaign against King Perseus, given the phonetic similarity of the two names and the timing the phrase was uttered and the death of the dog occurred. The Romans, unlike the Greeks, considered that signs from the left were usually favorable and positive, while signs from the right were seen as adverse and negative. However, under Greek influence this procedure began to change and eventually lost its universal weight, meaning that each omen case was to be examined separately.[4]

In the field of astrology, solar and lunar eclipses (along with the appearance of comets and to some extent the full moon) have often been considered omens of notable births, deaths, or other significant events throughout history in many societies. One biblical example is the Magi in the Gospel of Matthew who predicted the birth of Jesus after seeing the Star of Bethlehem. 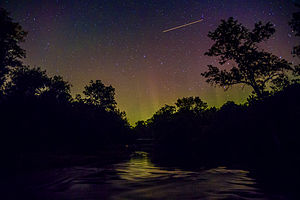 Star falling into the aurora over the Kewaunee River. 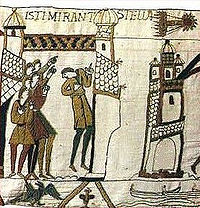 Halley's Comet's appearance in 1066 was recorded on the Bayeux Tapestry. ISTI MIRANT STELLA literally means "These ones are looking in wonder at the star". National Geographic translated it in a 1966 article about the tapestry as "These men wonder at the star."

Omens may be considered either good or bad depending on their interpretation. The same sign may be interpreted differently by different people or different cultures.

For example, a superstition in the United States and other countries across Europe indicates that a black cat is an omen of bad luck.[5]

Comets also have been considered to be both good and bad omens. The best-known example is probably Halley's Comet, which was a "bad omen" for King Harold II of England but a "good omen" for William the Conqueror.[6]