One News is the news division of New Zealand television network TVNZ. The service is broadcast live from TVNZ Centre in Auckland. The flagship news bulletin is the nightly 6 pm news hour, but One News also has midday and late night news bulletins, as well as current affairs shows such as Breakfast and Seven Sharp.

The head of TVNZ News and Current Affairs is John Gillespie.

One News was awarded Best News in the Qantas Media Awards from 2008 through 2011 and won Best Breaking News in the New Zealand Film and Television Awards 2012.

Television news in New Zealand started in 1960 with the introduction of television. These bulletins were broadcast from New Zealand's four main cities (Auckland, Wellington, Christchurch and Dunedin) operating independently of each other due to technical constraints. The Wahine Disaster in April 1968 highlighted the need for a nationwide news network; footage shot in Wellington could not be broadcast in other centres around the country at the same time.

In October 1969 the country-wide TV network was completed. The first network news broadcast was live on 3 November 1969 at 7:35 pm, read by Dougal Stevenson. This bulletin was possible due to microwave links being established between the four main centres; the programme was called NZBC Network News. Initially, it was read by Philip Sherry, Dougal Stevenson or Bill Toft on a rotating roster.

Prior to the building of the Warkworth satellite communications station in 1971, international programmes could not be received live – the footage had to be flown into New Zealand and was often days old.

Angela D'Audney was the first female newsreader in New Zealand, from 1973. The Network News featured many other newsreaders until the NZBC was dissolved in 1975. The programme was then renamed simply News. The main bulletin was revamped in 1987. It was renamed Network News with Judy Bailey and Neil Billington initially co-presenting. Richard Long and Tony Ciprian alternately presented and produced sports news. Later that year Long took over from Billington as Network News news co-anchor, the beginning of a partnership that would continue for much of the next fifteen years. Ciprian moved to the new commercial channel TV3, the station's first sports news producer. He was with 3 News for almost 20 years.

From the 1970s, four regional news programmes were broadcast – one in each of the four main regions: Top Half (Auckland and the upper North Island), Today Tonight (Wellington and the lower North Island and originally the upper South Island), The Mainland Touch (Christchurch, Canterbury and later the upper South Island) and The South Tonight (Otago and Southland). Initially, these programmes ran for 20 minutes during the main news programme at 7 pm, between the sports and weather news. In 1988, the Network News was moved to 6 pm and regional news shows to 6:30 pm. On 11 April 1989 TVNZ launched a new nightly current affairs show, Holmes, which was presented by Paul Holmes. Holmes began screening at 6:30 pm and regional news shows were moved to 5:45 pm before the Network News bulletin before being axed at the end of 1990.

1989 saw the introduction of the first One News foreign correspondents – Liam Jeory in London and Susan Wood in Sydney. The 6:30 pm bulletin was reduced back to 30 minutes on weekdays.

In 1989, Network News was relaunched as One Network News; its renaming due to competition from new broadcasting station TV3's news programme 3 National News. In 1995, the main bulletin was again extended from 30 to 60 minutes, screening from the now familiar 6:00 pm timeslot, followed by Holmes at 7 pm. The change coincided with the unveiling of a new studio set which was used until 2003. On 11 August 1997, the early morning Telstra Business and Breakfast shows were first aired; Telstra Business was hosted by Michael Wilson; Breakfast hosted by Susan Wood and Mike Hosking.

The end of 1997 saw the replacement of weekend news presenters Angela D'Audney and Tom Bradley with husband and wife Simon Dallow and Alison Mau. Bradley resigned, but D'Audney stayed as a backup presenter for other bulletins until her death in February 2002, from a brain tumour.

In 1998, TVNZ signed 3 News anchor John Hawkesby to replace Richard Long from the start of 1999. But when Haweskby began presenting One Network News at 6 pm alongside Judy Bailey, there was a public outcry over the separation of Bailey and Long, that lead to Long reinstated as co-anchor at 6 pm three weeks later. Hawkesby later took TVNZ to court, a dispute that he subsequently won.

The show was renamed again on 31 December 1999 to the current name of One News.

2003 saw a major shake up of TVNZ's news and current affairs programming with entering head Bill Ralston making sweeping changes to the formats of many programmes. A new state-of-the-art studio came into use for One News programmes, but many presenters were culled. The changes saw the end of Long and Bailey's 15-year partnership; from January 2004, the main 6 pm bulletin reverted to a single-headed broadcast with Judy Bailey as anchor. Jim Hickey, TVNZ's most popular weather presenter, and sports presenter April Bruce (née Ieremia) also left in 2003. Jim returned to One News in 2007.

Close Up was launched in November 2004, when Paul Holmes, host of the Holmes programme, resigned following failed contract negotiations. Close Up followed the same format as Holmes, but was hosted by Susan Wood until her sudden resignation in 2006. Mark Sainsbury became the main host following her resignation.

In October 2005, TVNZ announced that it would not be renewing long-standing flagship broadcaster Judy Bailey's contract; some observers believe this was a direct reaction to the programme's market share decline in Auckland to 3 News. An emotional Bailey signed off for the final time at the end of the 6 pm One News bulletin on 23 December 2005. She was TVNZ's longest serving newsreader and had been reporting and presenting with both NZBC and TVNZ for 34 years. When the 6 pm edition of One News returned after the Christmas break of 2005–2006, it reverted to double-headed presentation with Wendy Petrie and Simon Dallow taking over from Bailey.

Sir Paul Holmes returned to TVNZ as the host on the new political programme Q+A in 2009. He hosted the programme until late 2012, when illness prevented him from continuing his duties. He died on 1 February 2013.

TVNZ celebrated One News' 40th birthday on 3 November 2009 with some archival footage available on their website. Later that year, Jennie Goodwin, David Beatson, Dougal Stevenson and Lindsay Perigo returned to read one Breakfast news segment each.

A Saturday edition of Breakfast was broadcast from 3 September 2011, hosted by Rawdon Christie and Toni Street. This was broadcast until the end of 2012.

TVNZ commissioned a revamped news/current affairs set on 23 January 2012. This set is used for the broadcast of the following programmes:

Saturday Breakfast and One News at 4:30 were cancelled at the end of 2012.

One News has reporters and correspondents based around New Zealand and internationally, with bureaus in Australia, Europe, USA, and in the Pacific.

Daniel Corbett joined the weather team in September 2014. In December 2014, Jim Hickey will leave his position as head weathercaster. A nearly a year later Karen Olsen left the weathercaster position with her final broadcast on 16 November 2015, a replacement is currently being considered.[2] 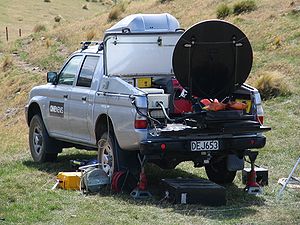 One News telecommunications ute, at the 2010 Mt Allan forest fire

The flagship One News bulletin screens nightly at 6 pm and is fronted by Simon Dallow and Wendy Petrie on weekdays, and Bernadine Oliver-Kerby, and Peter Williams at weekends. Business is presented by Nadine Chalmers-Ross. Sport is presented by Jenny-May Coffin or Andrew Saville, and weather by Daniel Corbett or Renee Wright.

On weekdays, One News screens multiple bulletins during the day. This includes One News Breakfast, hosted by Peter Williams on Monday-Wednesday and Nadine Chalmers-Ross on Thursday and Friday. These are 5- to 10-minute news and weather updates that screen on during the Breakfast show (news 6–8.30 am, weather 6.35–8.35 am). Weather reports during Breakfast are presented by Sam Wallace.

One News also produces two half-hour bulletins, which screen at Midday and approximately 10:30 pm. The midday bulletin, One News at Midday is also hosted by the same presenter for Breakfast news and the late night broadcast, One News Tonight is presented by Greg Boyed with Renee Wright presenting the weather report.

Breakfast is a three-hour-long magazine style news and current affairs programme which looks at the day's headlines and events happening around New Zealand. News, sport and weather are updated every half hour, with business news being updated at around 6:40 am, 7:10 am and 8:10 am.

Breakfast received a new look and set, along with other TVNZ news and current affairs programmes, on 23 January 2012. Plasma screens and lighting effects make up the majority of the set design, meaning ease of changeover between Breakfast and Good Morning, which are to share the same set, and air live, back to back. Changes to the show's format from January 2012 mean the first half hour of the show will be more formal, and feature the presenters behind news desks, from 6 am until 6:30, when the presenters will then move to couch or "soft set" to continue with its traditional, more relaxed style from 6:30 until 9 am. This format change was made as a result of TV3's competing Firstline programme which airs at the same time, and is a more formal approach to morning news and current affairs.

From 2013 changes were made to the format of the show. New segments were also introduced along with small changes to the on-screen graphics and the positioning of presenters.

TVNZ Breakfast saw record rating dominations during the live screening of the America's Cup from San Francisco, with 1,000,000 viewers tuning in each morning to watch each race.

Te Karere is a half-hour news programme broadcast entirely in Māori. The weather is also broadcast in Māori. Te Karere regularly attracts between 50,000 – 80,000 viewers a day.

Q+A is an hour-long political show containing an interview with a politician that has been in the news during the previous week and a panel debate on a political hot topic. Q+A has been screening since March 2009.

20/20 is an investigative news and current affairs magazine style show. The show is of the same format to that of the American Broadcasting Company's edition.

It airs on TV2 and consists of both local content and international stories (retrieved from partnering networks and shows in Australia). 20/20's set is the shared TVNZ News and Current Affairs studio in the TVNZ Television Centre in central Auckland.

Discontinued in July 2012, when TVNZ 7 closed down.

Amalgamated into Breakfast in 2013.

Replaced with Seven Sharp in 2013.

Discontinued in November 2012 due to lack of funding.

One News at Midday

This list excludes reporters from TVNZ News, Good Morning, 20/20, Q&A, Fair Go, Sunday, Te Karere, Marae Investigates and Seven Sharp. TVNZ has one of the largest news gathering teams in the country - based in New Zealand and in TVNZ bureaus around the world.

News resources on One News