Otis Chandler (November 23, 1927 – February 27, 2006) was the publisher of the Los Angeles Times between 1960 and 1980, leading a large expansion of the newspaper and its ambitions.[1] He was the fourth and final member of the Chandler family to hold the paper's top position.[1]

Chandler made improvement of the paper's quality a top priority, succeeding in raising the product's reputation, as well as its profit margins.[1] "No publisher in America improved a paper so quickly on so grand a scale, took a paper that was marginal in qualities and brought it to excellence as Otis Chandler did," journalist David Halberstam wrote in his history of the company.[1]

Chandler's family owned a stake in the newspaper since his great-grandfather Harrison Gray Otis joined the company in 1882, the year after the Los Angeles Daily Times began publication.[1] He was the son of Norman Chandler, his predecessor as publisher, and Dorothy Buffum Chandler, a patron of the arts and a Regent of the University of California. His grandfather, Charles Abel Buffum was a businessman that founded Buffum's a department store chain, with his brother, Edwin A. Buffum, and a politician, who served as Mayor of Long Beach, California.

Chandler was raised to share his family's distaste for labor unions, a tradition that favored the family's financial interests. As a child, each year his parents held a memorial for the 1910 Los Angeles Times bombing, linked to political agitators, that killed 20 Times workers. "I was raised to hate the unions," Chandler said.[1]

"Oats" was Chandler's nickname within the family.[1]

Times editorial page editor Anthony Day observed that Chandler "had been raised to be a prince".[1]

Throughout his life, Chandler complained that his family was not properly respected by East Coast elites.[1] About attending an exclusive East Coast boarding school, he said, "Nobody there had ever heard of the Chandlers. I was strictly a tall, skinny blond kid from California".[1] Later in life, Chandler said his motivation to invest in The Times' quality could be attributed, at least in part, to his desire to combat the East Coast opinion that, "The Times was regarded as a bad newspaper from a hick town".[1] Chandler attributed his pursuit of solo athletics like shotputting and weightlifting to the same sources, saying, "No one could say that the team carried me or that the coach put me in because my name was Chandler".[1]

Chandler was raised on a 10-acre (40,000 m2) citrus ranch in Sierra Madre owned by his parents.[1] Despite his family's wealth, Chandler's father insisted that he perform field labor and did not spoil him with gifts.[1] There Chandler spent much of his time alone, later in life unable to name a single childhood friend.[1]

Chandler first attended the Polytechnic School in Pasadena, often making his commute by bicycle.[1] Later he would briefly attend the Cate School boarding school in Carpinteria before his parents elected to send him east to attend Phillips Academy in Andover, Massachusetts.[1] At the time he enrolled at Phillips, Chandler weighed 155 pounds. As a student he competed in basketball, soccer, the high jump, running and weightlifting. By the time of graduation, he weighed 200 pounds.[1]

Chandler enrolled at his parents' alma mater, Stanford University, in 1946.[1] Like his father, he was a member of Delta Kappa Epsilon fraternity (Sigma Rho chapter).[2] At Stanford he was a successful shot putter.[1] He broke the freshman school record with a toss of 48 feet (15 m), 761/47 inches.[1] After bulking up to 6-foot (1.8 m), 3 inches and 220 pounds, he won the Pacific Coast Conference title and finished second in the nation during his senior year with a toss of 57 feet (17 m), 63/47 of an inch while serving as his team's captain.[1] As a weightlifter, Chandler finished third in the nation competing in the heavyweight division.[1]

Only a sprained wrist kept him from competing as a shotputter for the United States in the 1952 Summer Olympics.[1][2]

After graduation, Chandler tried to enroll in an Air Force training program, but was turned down because he was too large to fit in the cockpit of a jet.[1] Instead, he spent 1951 to 1953 in the Air Force's ground service, as a co-captain of the track team and supervisor of athletics and drama at Camp Stoneman in Pittsburg, California.[2]

On his 23rd birthday, Chandler proposed to his college sweetheart, Marilyn Brant, on the seventh hole of the Pebble Beach golf course. Their first child was a boy named Norman after Chandler's father.[1]

Chandler visited The Times frequently as a child, sliding down chutes that were used to drop papers to delivery trucks.[1] While in college, he sometimes worked summers at the paper, most often moving printing plates and other heavy equipment.[1] Despite that, Chandler did not envision journalism as a career during his youth;[1] instead, he often said he would like to become a doctor.[1] After leaving the Air Force in 1953, he had little direction for his career. When he arrived at his parents' home with his wife and first child, his father presented him with credentials for a seven-year executive training program at The Times.[1] He started work right away as a pressroom apprentice on the graveyard shift.[1] The pay was $48 a week.[1] His father made sure that Chandler experienced work in all sections of the organization, assigning him to jobs in the industrial production of the paper, business management, clerical administration, and the newsgathering operation.[1] 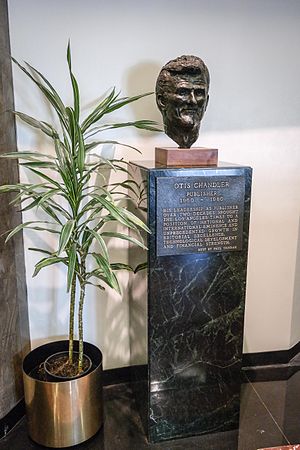 A bust of Otis Chandler in the lobby of the Los Angeles Times Building.

In 1960, he became publisher of the Los Angeles Times. He quickly increased the budget of the paper, allowing it to expand its coverage. This coincided with the shift of the paper from an overtly political (and generally conservative) publication to a modern, nonpartisan daily report. Under Otis Chandler, The Times became a critically lauded newspaper.

When Chandler took the job, the paper had only two outside offices.[1] During his tenure it would expand to 34 foreign and domestic bureaus.[1]

In 1966 Chandler received the Elijah Parish Lovejoy Award as well as an honorary Doctor of Laws degree from Colby College.

Chandler retired from the position of publisher in 1980 at the age of 52[1] to become chairman of Times Mirror, reducing his involvement in the day-to-day operations of the company. The decision stunned the staff and outside observers, many of whom expected him to serve much longer.[1]

He handed control of the paper to people outside the family in the mid-1980s and threw himself into other interests such as the Chandler Vintage Museum of Transportation and Wildlife in Oxnard, California, which he founded in 1987 (It was regularly open to the public, primarily as a fundraiser for charities, including the Oxnard Police Activities League).

Chandler re-entered the public eye in 1999 when he publicly criticized the LA Times for creating a special issue of its Sunday magazine dedicated to the new Staples Center in downtown LA when the paper shared a financial interest in the property. The paper's Sunday magazine on October 10, 1999, was a special issue dedicated to the new Staples Center sports arena in downtown L.A., home to the Lakers, Clippers and Kings. Such special issues were financial windfalls for the Times, generating a record $2 million in ad revenue. But as one of the arena's 10 "founding partners", the paper had agreed to share the issue's ad revenue with the Staples Center without telling its reporters or readers about the fiscal arrangement. Chandler, who had retired 19 years prior, sent his message directly to reporters, to the dismay of the newspaper's management. His successors, he said, had been "unbelievably stupid" and caused "the most serious single threat to the future" of the paper his family had bought in 1882 for this dangerous compromise of the paper's objectivity.[3]

He was not involved in negotiations by other members of the Chandler family to sell The Times to Tribune Company, a clear sign of how his influence had eroded.[1] Regardless, Chandler welcomed the outcome, largely because of his dissatisfaction with the existing management of Times-Mirror.[1]

Chandler died at his home in Ojai at the age of 78 due to the effects of Lewy body disease, seven months after his diagnosis.[1] Chandler had had earlier problems with his health, suffering from prostate cancer in 1989 and a 1998 heart attack.[1]

Throughout his life, Chandler was an enthusiastic athlete and thrillseeker, an image he actively cultivated.[1] During his life, Chandler was featured on the cover of sporting magazines like Road & Track, Strength and Health, and Safari Club. When photographed for the cover of the literary magazine Atlantic Monthly he was depicted on a surfboard crafted from newspapers across a wave of dollar bills.[1]

His son Mike was a race car driver in the CART Championship Car series. Otis enthusiastically supported Michael's racing career until a near-fatal crash while qualifying at Indianapolis in 1984.

Apart from his medical problems, Chandler claimed to have had a half-dozen brushes with death.[1]