Pyotr Demianovich Ouspenskii (known in English as Peter D. Ouspensky, Пётр Демья́нович Успе́нский; 5 March 1878 – 2 October 1947),[1] was a Russian mathematician and esotericist known for his expositions of the early work of the Greek-Armenian teacher of esoteric doctrine George Gurdjieff, whom he met in Moscow in 1915.

He was associated with the ideas and practices originating with Gurdjieff from then on. In 1924, he separated from Gurdjieff personally, for reasons he explains in the last chapter of his book In Search of the Miraculous. Some, including his close pupil Rodney Collin, say that he finally gave up the (Gurdjieff) "system" that he had shared with people for 25 years in England and the United States, but his own recorded words on the subject ("A Record of Meetings", published posthumously) do not clearly endorse this judgement, nor does Ouspensky's emphasis on "you must make a new beginning" after confessing "I've left the system". All this happened in Lyne Place, Surrey, England, in 1947, just before his death. While lecturing in London in 1924, he announced that he would continue independently the way he had begun in 1921. All in all, Ouspensky studied the Gurdjieff system directly under Gurdjieff's own supervision for a period of ten years, from 1915 to 1924. His book In Search of the Miraculous is a recounting of what he learned from Gurdjieff during those years.[2]

Ouspensky was born in Moscow in 1878. In 1890, he was studying at the Second Moscow Gymnasium, a government school attended by boys from 10 to 18. At the age of 16, he was expelled from school for painting graffiti on the wall in plain sight of a visiting inspector; thereafter, he would be more or less on his own.[3] In 1906, he was working in the editorial office of the Moscow daily paper The Morning. In 1907 he discovered Theosophy. In the autumn of 1913, age 35, before the beginning of World War I, he journeyed to the East in search of the miraculous, visited Theosophists in Adyar but was forced to returned to Moscow after the beginning of the Great War. There he met George Gurdjieff and married Sophie Grigorievna Maximenko. He had a mistress by the name of Anna Ilinishna Butkovsky.[4]

His first book, The Fourth Dimension, appeared in 1909; his second book, Tertium Organum, in 1912. A New Model of the Universe, as explained by Ouspensky in the foreword of the second edition, was written and published as articles by 1914, updated to include "recent developments in physics" and republished as a book in Russian in 1917. It was assumed that Ouspensky was lost to the Revolution's violence, it was then republished in English without his knowledge in 1931. Since the earliest lectures this work attracted a who's who of the philosophy crowd (see below) and has been to this day a widely accepted authoritative basis for a study of metaphysics, or rather, to exceed the limits of the same by his "psychological method", which he defines as (paraphrasing p. 75.) "a calibration of the tools of human understanding to derive the actual meaning of the thing itself." This term is one of three high concepts of the material presented, along with "the esoteric method" which as he sums up (p. 76) depends on the first to derive the possibility of something beyond ordinary human effort entirely. In high concept terms: "The idea of esotericism ... holds that the very great majority of our ideas are not the product of evolution but the product of the degeneration of ideas which existed at some time or are still existing somewhere in much higher, purer and more complete forms." (p. 47) Ouspensky's reputation is presently degenerated to being a follower of Gurdjieff rather than a partner (see below) and the apex of esotericism, self-knowledge, and metaphysical thought. The title itself promises a model of the universe, or unified theory of everything, which it is. He also wrote the novel Strange Life of Ivan Osokin, which explored the concept of eternal recurrence or the eternal return.

He traveled in Europe and the East — India, Ceylon, and Egypt — in his search for knowledge. After his return to Russia and his introduction to Gurdjieff in 1915, Ouspensky spent the next few years studying with him, and supporting the founding of a school. According to Osho, when Ouspensky went to Gurdjieff for the first time, the latter was but an unknown fakir and Ouspensky made him well-known to his own reading public.[5]

Denying the ultimate reality of space and time in his book Tertium Organum,[6] he also negates Aristotle's Logical Formula of Identification of "A is A" and finally concludes in his "higher logic" that A is both A and not-A.[7]

Unbeknown to Ouspensky, a Russian émigré by the name of Nicholas Bessarabof took a copy of Tertium Organum to America and placed it in the hands of the architect Claude Bragdon who could read Russian and was interested in the fourth dimension.[8] Tertium Organum was rendered into English by Bragdon who had incorporated his own design of the hypercube[9][10] into the Rochester Chamber of Commerce building.[11] Bragdon also published the book and the publication was such a success that it was finally taken up by Alfred A. Knopf. At the time, in the early 1920s, Ouspensky's whereabouts were unknown until Bragdon located him in Constantinople and paid him back some royalties.

Ouspensky's lectures in London were attended by such literary figures as Aldous Huxley, T. S. Eliot, Gerald Heard and other writers, journalists and doctors. His influence on the literary scene of the 1920s and 1930s as well as on the Russian avant-garde was immense but still very little known.[12] It was said of Ouspensky that, though nonreligious, he had one prayer: not to become famous during his lifetime.

Ouspensky also provided an original discussion of the nature and expression of sexuality in his A New Model of the Universe; among other things, he draws a distinction between erotica and pornography.

During his years in Moscow, Ouspensky wrote for several newspapers and was particularly interested in the then-fashionable idea of the fourth dimension.[13] His first published work was titled The Fourth Dimension[14] and he explored the subject along the ideas prevalent at the time in the works of Charles H. Hinton,[15] the fourth dimension being an extension in space.[16][17] Ouspensky treats time as a fourth dimension only indirectly in a novel he wrote titled Strange Life of Ivan Osokin[18] where he also explores the theory of eternal recurrence. 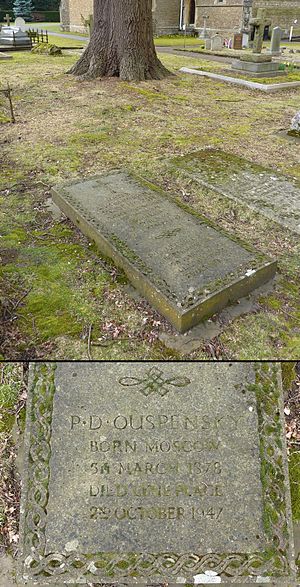 Ouspensky's grave at the Holy Trinity Church in Lyne, Surrey, England, photographed in 2013

After the Bolshevik revolution, Ouspensky travelled to London by way of Istanbul. G. R. S. Mead became interested in the fourth dimension and Lady Rothermere, wife of Harold Harmsworth, 1st Viscount Rothermere, the press magnate, was willing to spread the news of Ouspenky's Tertium Organum, while Ouspensky's acquaintance A. R. Orage was telling others about Ouspensky. By order of the British government, Gurdjieff was not allowed to settle in London. Gurdjieff finally went to France with a considerable sum of money raised by Ouspensky and his friends and settled down near Paris at the Prieuré in Fontainebleau-Avon.[19] It was during this time, after Gurdjieff founded his Institute for the Harmonious Development of Man in France, that Ouspensky came to the conclusion that he was no longer able to understand his former teacher and made a decision to discontinue association with him, setting up his own organisation, The Society for the Study of Normal Psychology, which is now known as The Study Society.[20] Nevertheless, he wrote about Gurdjieff's teachings in a book originally entitled Fragments of an Unknown Teaching, only published posthumously in 1947 under the title In Search of the Miraculous. While this volume has been criticized by some of those who have followed Gurdjieff's teachings as only a partial representation of the totality of his ideas, it nevertheless provides what is probably the most concise explanation of the material that was included. This is in sharp contrast to the writings of Gurdjieff himself, such as Beelzebub's Tales to his Grandson, where the ideas and precepts of Gurdjieff's teachings are found very deeply veiled in allegory. Initially, Ouspensky had intended this book to be published only if Beelzebub's Tales to his Grandson were not published. But after his death, Mme Ouspensky showed its draft to Gurdjieff who praised its accuracy and permitted its publication.

He died in Lyne Place, Surrey, in 1947. Shortly after his death, The Psychology of Man's Possible Evolution was published, together with In Search of the Miraculous. A facsimile edition of In Search of the Miraculous was published in 2004 by Paul H. Crompton Ltd. London. Transcripts of some of his lectures were published under the title of The Fourth Way in 1957; largely a collection of question and answer sessions, the book details important concepts, both introductory and advanced, for students of these teachings.

After Ouspensky broke away from Gurdjieff, he taught the "Fourth Way", as he understood it, to his independent groups.

Gurdjieff proposed that there are three ways of self-development generally known in esoteric circles. These are the Way of the Fakir, dealing exclusively with the physical body, the Way of the Monk, dealing with the emotions, and the Way of the Yogi, dealing with the mind. What is common about the three ways is that they demand complete seclusion from the world. According to Gurdjieff, there is a Fourth Way which does not demand its followers to abandon the world. The work of self-development takes place right in the midst of ordinary life. Gurdjieff called his system a school of the Fourth Way where a person learns to work in harmony with his physical body, emotions and mind. Ouspensky picked up this idea and continued his own school along this line.[21]

Ouspensky made the term "Fourth Way" and its use central to his own teaching of the ideas of Gurdjieff. He greatly focused on Fourth Way schools and their existence throughout history.

Ouspensky personally confessed the difficulties he was experiencing with self-remembering, a technique to which he had been introduced by Gurdjieff himself. Gurdjieff explained to him this was the missing link to everything else. While in Russia, Ouspensky himself experimented with the technique with a certain degree of success and in his lectures in London and America, he emphasized its practice. The technique requires a division of attention, so that a person not only pays attention to what is going on in the exterior world but also in the interior. A.L. Volinsky, an acquaintance of Ouspensky in Russia mentioned to Ouspensky that this was what professor Wundt meant by apperception. Ouspensky disagreed and noted how an idea so profound to him would pass unnoticed by people whom he considered intelligent. Gurdjieff explained the Rosicrucian principle that in order to bring about a result or manifestation, three things are necessary. With self-remembering and self-observation two things are present. The third one is explained by Ouspensky in his tract on Conscience: it is the non-expression of negative emotions.[22][23]

According to Beryl Pogson, author of The Work Life, "...the only real poverty is lack of self-knowledge."[24]