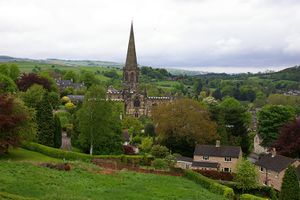 All Saints Bakewell, a parish church in Derbyshire

Each parish is administered by a parish priest who may be assisted in his pastoral duties by a curate or curates, who are also ordained but not the parish priest. There are wide variations in the size of parishes and church-going populations. A parish priest may have responsibility for one parish or for two or more and some are part of a team ministry. By extension the term parish refers not only to the territorial unit but to the people of its community or congregation.

From the Greek paroikia, the dwellingplace of the priest, eighth Archbishop of Canterbury Theodore of Tarsus (c.602–690) applied to the Anglo-Saxon township unit, where it existed, the ecclesiastical term parish.

First attested in English late 13th century, the word parish comes from the Old French paroisse, in turn from Latin paroecia,[1] which is the latinisation of the Greek παροικία (paroikia), "sojourning in a foreign land",[2] itself from πάροικος (paroikos), "dwelling beside, stranger, sojourner",[3] which is a compound of παρά (para), " beside, by, near"[4] + οἶκος (oikos), "house".[5] 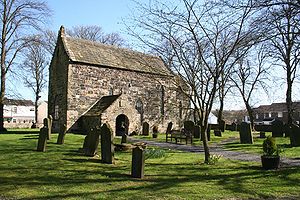 The introduction of Christianity and its development under Æthelberht of Kent (c. 560–616) required an organization for ecclesiastical administrative purposes. From the Greek paroikia, the dwellingplace of the priest, eighth Archbishop of Canterbury Theodore of Tarsus (c. 602–690) applied the ecclesiastical term parish to the Anglo-Saxon township format where already in existence. Generally the township and parish coincided but in the North some townships may have been combined and in the South, where populations were bigger, two or more parishes might be made out of one township. Townships not included in a parish were extra-parochial. There may have been much less uniformity than these general guidelines imply. Extended since the 973-975 reign of Edgar (c. 943–975) the process of parish organisation appears to have been completed during the fifty-year reign of Edward III (1312–1377). 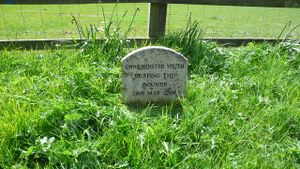 In general Church of England parishes owe their origin at first to the establishment of a minster church by a body of clergy. That usually large parish was soon further subdivided into the smaller parishes described above, each associated with an estate church founded by Anglo-Saxon or, later, Norman landowners using the minster foundation template and according to the authority of their nobles.[6] Having provided the land and usually the church building the landowner reserved the right, by ownership of the advowson, to select a parish priest subject to the bishop's approval. One parish may have been situated in different counties or hundreds and in many cases parishes contained in addition to its principal district several outlying portions, usually described as 'detached', intermixed with the lands in other parishes.
A present-day parish boundary may even correspond to that of an Anglo-Saxon estate of more than one thousand years ago but is more likely to date from the 17th century when boundaries were rearranged to fit a parish with a landowner's responsibilities and thereby avoiding potential further dispute.

Some sparsely populated areas of England were outside any parish, i.e. extra-parochial until the 19th century, though a very few technical exceptions remain (most notably royal peculiars). The term unparished area, used for most urban areas, relates to civil parishes and not ecclesiastical parishes. 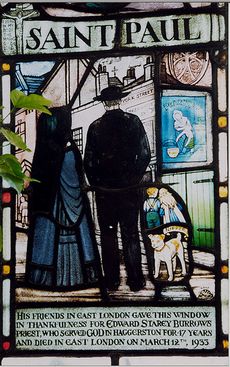 Each parish should have its own parish priest (who might be termed its vicar or its rector), perhaps supported by one or more curates or deacons - although as a result of ecclesiastical pluralism some parish priests might have held more than one parish living, placing a curate in charge of those where they did not reside. The church property was technically in the ownership of the parish priest ex-officio, vested in him on his institution to that parish.

Now, however, it is common for a number of neighbouring parishes to be placed in the charge of a single vicar who takes services at them by rotation, with additional services being provided by lay readers or other non-ordained members of the church community.

In the Church of England, part of the Anglican Communion, the legal right to appoint or recommend a parish priest is called an advowson, and its possessor is known as a patron. The patron can be an individual (or jointly or by rotation), the Crown, a bishop, a college, a charity or other religious body. Appointment as a parish priest gives the incumbent the privilege of a benefice or living. Appointment by patrons is now governed under the Patronage (Benefices) Rules 1987.[7]

In mediaeval times and subsequently, such right of appointment of a priest could be used to influence local opinions but a patron's candidate always had to be approved by the diocesan bishop.

An example can be seen in the article on Grendon, Northamptonshire. It was frequently used to promote particular religious views. For example, Robert Rich, 2nd Earl of Warwick presented many puritan clergy. In the 19th century Charles Simeon established a trust to purchase advowsons and install evangelical priests. Ownership of an advowson now carries little personal advantage, save kudos;[8] the right to sell church advowsons was reduced by successive legislation being rendered impossible after 1936[9] and, subject to local covenants, church patrons traditionally contributed to the church's upkeep.

The business affairs of the parish were administered by its vestry, an assembly or meeting of parishioners or their representatives to make the necessary decisions. Following the Registration Act of 1836, from 1 July 1837 the Church vestry's civil as distinct from ecclesiastical responsibilities devolved in gradual steps to the purely civil parish and its parish council. The Established Church also began its own administrative reforms. The ecclesiastical parish's remaining business affairs are now administered by the vestry's replacement, its parochial church council, which is partly ex officio and partly elected from the congregation.

It is worth noting that a few purely civil parishes had been created between the English Civil War and the wholescale Victorian reforms, but they were few in number: Bedfordshire for example had just one in the county and it was not created until 1810.[10]

The ancient parochial office of clerk went in early times under the Latin name "Aquae Bajulus", in English "Holy Water Bearer" since the sprinkling of holy water was recognised as an important duty of this office. He had many other duties as a kind of general assistant to the parish priest; these included participation in church services and accompanying the priest on various occasions. At his induction into office he received the holy water and sprinkler (probably from the Archdeacon). By an injunction of the King's Visitors in 1548 (reign of King Edward VI) the parish clerk's duties were redefined and the custom of holy water sprinkling was abolished. The clerk then began to be an assistant to the churchwardens in collecting money for the benefit of the poor as well as continuing in some of his other functions. Parish clerks were appointed on the nomination of the parish priest and their tenure was regarded as a freehold. By Act 7 & 8 Vict. cap. 59 only the archdeacon or the bishop could remove him from office (in case of misconduct). Sometimes the character and abilities of the tenured parish clerk did not suit the parish priest and he would appoint someone else more to his liking leaving the original parish clerk in a sinecure.[11]

In the absence of any other authority (which there would be in an incorporated city or town), the vestry, the ecclesiastical parish administrative centre, was the recognised unit of local government, concerned for the spiritual but also the temporal as well as physical welfare of parishioners and its parish amenities, collecting local rates or taxes and taking responsibility for the care of the poor, roads, law enforcement, etc. For example, parishes carried out the duties as legislated by the Poor Law. What follows is a snapshot of the system at a particular point in time:

Central government placed its obligations on parishes without specifying how they should be carried out. So no two parishes were organised in the same way, unless by coincidence. 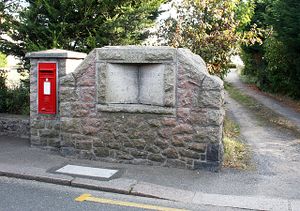 Parish boundary stone between the parishes of Grouville and St Clement Channel Islands, (1909) showing the names of the constables

by rotation every man was called upon in church to send his team or go in person to labour for six days on the roads. The whole parish had to turn out, when summoned, to join in the hue and cry after suspected felons such as robbers. This general ability to carry out the sheriff's rights followed a sheriff's posse and were known as the sheriff's posse.

The property-less employee escaped the tithes and taxes and received, when destitute, the parish pay. Under the Settlement Act 1662, aka Poor Relief Act, at the discretion of the Overseers of the Poor, he was liable to be sent back to the parish where he was born or otherwise legally settled. However, he could obtain a settlement certificate to enable him to seek work elsewhere. He might thus live in a new parish but without becoming settled by contribution receive no benefits from the new parish, only from his parish of origin.

Increasingly from the 17th century, the wealthy classes in town or country could buy exemption from, or commute for money, many of the innumerable personal obligations imposed by the parish,[13] and largely interacted with the vestry therefore only as a taxing authority. The practice of the lord of the manor or his nominee appointing the priest, by virtue of his advowson, diminished markedly after the Tudor period.

Civil parishes and their governing parish councils evolved as ecclesiastical parishes began to be relieved of what became considered to be civic responsibilities. Their initially coterminous boundaries began to diverge. Poor Law administration did not suit the subdivision of old parishes with population change and as communities and congregations expanded following the Industrial Revolution. Again, it was better for poor law administration districts, civil parishes, to fit county boundaries. Ecclesiastical parishes not always did. So the word parish acquired a secular usage. Since 1895, a parish council elected by the general public or a (civil) parish meeting administers a civil parish and became the level of local government below a district council.