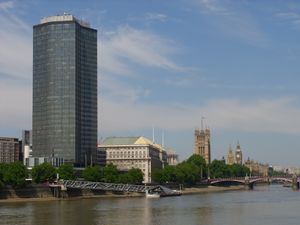 Millbank Tower, the current location of the Parliamentary and Health Service Ombudsman

The Ombudsman is responsible for considering complaints by the public that UK Government departments, public authorities and the National Health Service in England have not acted properly or fairly or have provided a poor service. In 2011–12, the Ombudsman handled just under 24,000 enquiries about Government departments and agencies and the NHS in England. Of these the Ombudsman resolved 23,889 enquiries – providing help and advice for 19,157 and looking closely at 4,732.[1]

The Ombudsman is appointed by the Crown on the recommendation of the Prime Minister and is accountable to Parliament. The Ombudsman is independent of both the Government and the civil service and reports annually to both Houses of Parliament.

The current Ombudsman is Dame Julie Mellor who has held the post since January 2012.

The offices of the Parliamentary and Health Service Ombudsman are at Millbank Tower, London.

File:Jackchurchill.jpg
Lieutenant-Colonel Jack Churchill was imprisoned in Sachsenhausen concentration camp and subsequently refused compensation by the Foreign Office. This decision was reversed after a report by the Ombudsman in 1968.

The creation of the post of the Parliamentary Ombudsman was spurred on by the 1954 Crichel Down affair and by the activism of pressure groups, including the Society for Individual Freedom. The position was created, and his or her powers are documented in, the Parliamentary Commissioner Act 1967, the most notable section of which is section 4 and Schedule 2, which constrain the powers of the incumbent ombudsman. Amongst other things, the ombudsman cannot investigate personnel and commercial actions.

The position of HSC was created later, under the Health Service Commissioners Act 1993. The office of the Parliamentary and Health Service Ombudsman emphasises that it looks into complaints "that government departments, their agencies and some other public bodies in the UK – and the NHS in England – have not acted properly or fairly or have provided a poor service." The first UK Ombudsman was Sir Edmund Compton who had previously been the Comptroller and Auditor General. He was succeeded by Sir Alan Marre, a career civil servant. He was the first Ombudsman appointed for the National Health Service and combined that role with that of the Parliamentary Ombudsman as have all his successors. He later became chairman of Age Concern and the post is currently held by Dame Julie Mellor DBE (since January 2012).

By law, complaints made to the Parliamentary Ombudsman must be referred by a Member of Parliament (MP); this is sometimes referred to as the 'MP filter'. The Ombudsman will only look into complaints if the organisation complained about has been given the opportunity to put things right first. The Ombudsman often receives enquiries which have not yet reached a stage where they can be investigated, usually because the complainant has not completed the complaints procedure of the organisation complained about. In 2012–13, 26,961 enquiries were received of which nearly 4,500 cases were resolved without the need for a full investigation. Of 384 cases which were accepted for a full investigation 86% were fully or partly upheld.[2]

Putting a complaint to the Health Service Commissioner does not require an MP referral but both complaint processes require that the organisation complained about has had the opportunity to put things right.

File:Lord young of Graffham.jpg
Lord Young, whose Department was criticised by the Ombudsman over its licensing of the Barlow Clowes group of companies. Barlow Clowes collapsed in 1988 owing £190 million.

The Ombudsman possesses wide powers of investigation and is able to determine the procedure for the investigation and to obtain information from such people as required. In respect of the gathering of evidence and the examination of witnesses, the Ombudsman has the same authority as the High Court. Defiance of these powers can be treated as contempt of court.

If the Ombudsman finds that there has been injustice caused by maladministration or a failure in service, a remedy to put things right can be proposed. This can include an apology, a compensation payment for hardship or injustice and compensation for financial loss. Although the Ombudsman does not possess the power to compel a public authority to adhere to its findings, in practice, the public authority will comply. In 2010–11, more than 99% of the individual recommendations for remedy made by the Ombudsman were accepted by the body complained about.[3]

In rare instances where the body complained about does not accept the Ombudsman's findings, the Ombudsman may lay a report before Parliament explaining that the injustice done to the complainant has not been, or will not likely to be, remedied. In such an event, the Select Committee that oversees the work of the Ombudsman is able to examine the matter and reach its own conclusions.

Reports issued by the Ombudsman are susceptible to judicial review by the courts. However, it has been held that the court would not readily interfere with the exercise of the Ombudsman's discretion.[4] 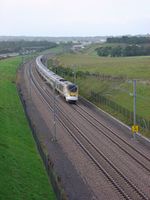 A Eurostar train near Ashford. In 1995, the Ombudsman investigated complaints made by residents in Kent about how the Government had administered plans for the high-speed rail-link. They alleged that uncertainty caused depreciation in property values.

From 19 August 2014 members of the public have been able to search the summaries of investigations that the Parliamentary and Health Service Ombudsman has completed and published on their website.[5]