Patrick Brontë (/ˈbrɒnti/, commonly /ˈbrɒnteɪ/;[1] 17 March 1777 – 7 June 1861) was an Irish-English priest and author who spent most of his adult life in England. He was the father of the writers Charlotte, Emily, and Anne Brontë, and of Branwell Brontë, his only son. Patrick outlived all his children and his wife, the former Maria Branwell, by forty years. 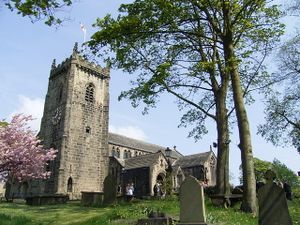 Patrick Brontë was the first of ten children born to Hugh Brunty, a farm labourer,[2] and Alice McClory,[3] in Drumballyroney (near Rathfriland), County Down. At one point in his adult life, he formally changed the spelling of his name from Brunty to Brontë (see the article on the Brontë family for theories for the change).

He had several apprenticeships (to a blacksmith, a linen draper, and a weaver) until he became a teacher in 1798. He moved to England in 1802 to study theology at St. John's College, Cambridge, and received his BA degree in 1806. He was then appointed curate at Wethersfield, near Braintree in Essex, where he was ordained a deacon of the Church of England in 1806, and into the priesthood in 1807.[4]

In 1809 he became assistant curate at Wellington, Shropshire, and in 1810 his first published poem, Winter Evening Thoughts, appeared in a local newspaper, followed in 1811 by a collection of moral verses, Cottage Poems. He moved to the West Riding of Yorkshire in 1811 as assistant curate at Hartshead, where he served until 1815.[4] In the meantime (1812) he was appointed a school examiner at a Wesleyan academy, Woodhouse Grove School, near Guiseley. In 1815 he moved again on becoming perpetual curate of Thornton.[4]

Brontë was offered the perpetual curacy of St Michael and All Angels' Church, Haworth in June 1819, and he took the family there in April 1820. His sister-in-law Elizabeth Branwell (1776–1842), who had lived with the family at Thornton in 1815, joined the household in 1821 to help to look after the children and to care for Maria Brontë, who was suffering the final stages of uterine cancer. Elizabeth decided to move permanently to Haworth to act as housekeeper.

After several attempts to seek a new spouse, Patrick came to terms with widowhood at the age of 47, and spent his time visiting the sick and the poor, giving sermons, communion, and extreme unction,[6] leaving the three sisters Emily, Charlotte, Anne, and their brother Branwell alone with their aunt and a maid, Tabitha Aykroyd (Tabby), who tirelessly recounted local legends in her Yorkshire dialect while preparing the meals.[7]

Brontë was responsible for the building of a Sunday school in Haworth, which he opened in 1832. He remained active in local causes into his old age, and between 1849 and 1850 organised action to procure a clean water supply for the village, which was eventually achieved in 1856.

In August 1846 Brontë travelled to Manchester, accompanied by Charlotte, to undergo surgery on his eyes. On 28 August he was operated upon, without anaesthetic, to remove cataracts. Surgeons did not yet know how to use stitches to hold the incision in the eye together and as a consequence the patient was required to lie quietly in a darkened room, for weeks after the operation. Charlotte used her time in Manchester to begin writing Jane Eyre, the book which was to make her famous.[8]

After the death of his last surviving child, Charlotte, nine months after her marriage, he co-operated with Elizabeth Gaskell on the biography of his daughter. He was also responsible for the posthumous publication of Charlotte's first novel, The Professor, in 1857. Charlotte's husband, Arthur Bell Nicholls (1819–1906), who had been Brontë's curate, stayed in the household until he returned to Ireland after Brontë's death, at the age of 84, in 1861. Brontë outlived not only his wife (by 40 years) but all six of his children.