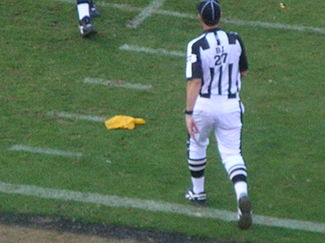 A penalty flag on the field during a game on November 16, 2008 between the San Francisco 49ers and St. Louis Rams.

In American football and Canadian football, a penalty is a sanction called against a team for a violation of the rules, called a foul. Officials initially signal penalties by tossing a bright yellow (American Football) or orange (Canadian football) colored "penalty flag" onto the field toward or at the spot of a foul. Many penalties result in moving the football toward the offending team's end zone, usually either 5, 10, or 15 yards, depending on the penalty. Most penalties against the defensive team also result in giving the offense an automatic first down, while a few penalties against the offensive team cause them to automatically lose a down. In some cases, depending on the spot of the foul, the ball is moved half the distance to the goal line rather than the usual number of yards, or the defense scores an automatic safety.

Because football is a high-contact sport requiring a balance between offense and defense, many rules exist that regulate equality, safety, contact, and actions of players on each team. It is very difficult to always avoid violating these rules without giving up too much of an advantage. Thus, an elaborate system of fouls and penalties has been developed to "let the punishment fit the crime" and maintain a balance between following the rules and keeping a good flow of the game. Players and coaches are constantly looking for ways to find an advantage that stretches the limitations imposed by the rules. Also, the frequency and severity of fouls can make a large difference in the outcome of a game, so coaches are constantly looking for ways to minimize the number and severity of infractions committed by their players.

It is a common misconception that the term "penalty" is used to refer both to an infraction and the penal consequence of that infraction. A foul is a rule infraction for which a penalty is prescribed.[1]

Officials initially signal fouls by tossing a bright yellow colored flag onto the field toward or at the spot of the foul. Because of this, broadcasters and fans often use the terms "flag" or "flag on the play" to refer to fouls during the game.

During a play, multiple officials may flag the same play, and multiple flags may be thrown for separate fouls on the same play. If applicable, the same official can signal additional fouls on a given play by throwing a beanbag or their hat. When officials throw a flag during a down, play does not stop until the ball becomes dead under normal conditions, as if there were no fouls.

Once the ball is dead, or immediately when a foul is called after a play is over or prior to a snap (since the ball is dead anyway), the referee, the official(s) who threw the flag(s) and other officials with a view of the play confer to come to a consensus on whether an infraction was actually committed, what it was, and who committed it. The final determination and assessment of the penalty is the sole responsibility of the referee. The referee then makes initial visual body signals to the press box (and crowd) indicating what fouls were committed and the team that committed them, the latter shown by extending the arm toward that team's end zone.

The referee then confers with the offended team's on-field captain to find out whether the offended team would rather decline the penalty and take the result of the play. In certain situations, the result of the play may be more advantageous to the offended team, especially, for example, if time is running out in the half and a 7-yard gain is a better option than a 5-yard penalty. However, there are certain scenarios where the referee may not have to confer with the team captain because the enforcement cannot be declined (such as a false start foul or other penalties called prior to the snap) or when the choice is fairly obvious (such as when the defense commits a foul during a play in which the offense scores a touchdown).

After any final conference, the referee then makes full visual signals describing the foul in detail, consisting of: the foul that was committed, the team that committed it, whether or not the opposing team chooses to decline it, and the resulting down or possession. In college football, the NFL and other professional leagues, and in some high school games, the referee also announces the fouls and their penalties over a wireless microphone to the members of the teams, the crowds in the stands, and viewers/listeners of the televised/radio broadcast of the game. In college and professional football, the referee will also give out the numbers of the players who committed the fouls. During these announcements over the microphone, the referee usually does not use names of the respective teams or their cities (however, in the Canadian Football League, they are announced by their respective city or province), but rather will use the generic terms "offense", "defense", "kicking team", "receiving team", etc. Some officials will refer to teams by their jersey color (e.g. "white", "red", "blue", etc.).

The following are general types of penalty enforcement. Specific rules will vary depending on the league, conference, and/or level of football.

If the defense commits a foul during the last play of any quarter, the offense usually has the option to accept the penalty and replay the down even with the clock showing 00:00 (i.e., an untimed play). Conversely, in most cases where the offense commits a foul during the last play in the half, the play in which the foul is committed is usually nullified and the half ends.

When a "double foul" occurs, when both teams commit a foul during a play, regardless of severity, the fouls are usually offset and the down is replayed. However, the two fouls must be committed in the same time frame. For instance, two fouls during the active play can offset, but a foul during the play and a personal foul after the whistle may not. Two personal fouls after the play can offset, although this is not often called. In the NFL, a major (15 yard) penalty by one team may not offset a minor (5 yard) penalty by the other team.

In the NFL, most defensive penalties result in an automatic first down. The exceptions are offside, encroachment, neutral zone infraction, delay of game, illegal substitution, calling excess timeouts, running into a kicker, and having more than 11 men on the field. In these cases, the appropriate yardage penalty is assessed. If the yardage penalty results in a first down, then a new set of downs is awarded; otherwise, there is a repeat of down.

In certain situations, a team may intentionally commit a foul in order to receive a penalty that they see as advantageous:

In the NFL and NCAA, a 10-second runoff is assessed if any of the following acts are committed by the offense in the last minute of either half:

The 10-second penalty does not apply if:

Moreover, the game clock will run once the ball is placed. If such a runoff occurs with 10 seconds or less remaining, the half automatically ends. Since the enforcement of the 10-second runoff, seven regular season NFL games ended automatically due to this rule: 2005 Arizona-St. Louis, 2009 Cincinnati-Green Bay, 2011 Chicago-Oakland, 2012 Washington-Philadelphia, 2012 New England-Arizona (which cost New England the chance to attempt a field goal at the end of the half in a game they eventually lost by two points), 2014 St. Louis-Tampa Bay (which cost Tampa Bay a chance to attempt a game-winning field goal), and 2015 New England-New York Jets (which cost the Jets an attempt to throw a Hail Mary and force the game to overtime). A pre-season game in 2006 between Houston and Kansas City had the first half end automatically due to an intentional grounding foul with less than 10 seconds left. A 2013 divisional playoff game between the New Orleans Saints and the Seattle Seahawks also ended on a 10-second runoff after Saints wide receiver Marques Colston threw an illegal forward pass.

Starting in 2011, the NCAA adopted a similar 10-second penalty rule for college football. Like the NFL rule, it applies in the last minute of each half, but the NCAA rule differs in that it applies to fouls by either side that cause a clock stoppage. Like the NFL rule, the team that benefits from the penalty may elect to take both the yardage and the runoff, the yardage alone, or neither (but not the runoff in lieu of yards). The penalized team may elect to take a charged timeout in order to avoid the run-off.[7]

The new NCAA rule was passed in response to the end of the 4th quarter in the 2010 Music City Bowl. In that game, the North Carolina Tar Heels were down 20-17 at the end of the 4th quarter and because they had no timeouts, they spiked the ball to stop the clock with 1 second left while too many men were on the field due to confusion about whether the field goal unit needed to come on the field. Because college football did not yet have the 10-second runoff, UNC was penalized 5 yards but was still able to kick the field goal to send the game to overtime, and would wind up beating Tennessee 30-27 in double overtime. Ironically, the new rule would not have saved Tennessee, because the Tar Heels' foul came after the snap, which would not have triggered the runoff.