Peter George "Pete" Peterson (June 5, 1926 - March 20, 2018) was an American businessman, investment banker, fiscal conservative, philanthropist, and author, who served as United States Secretary of Commerce from February 29, 1972 to February 1, 1973. He was also known as founder and principal funder of The Peter G. Peterson Foundation, which he established in 2008 with a $1 billion endowment. The group focuses on raising public awareness about U.S. fiscal-sustainability issues related to federal deficits, entitlement programs, and tax policies.[1] In recognition of his support, the influential[2] Peterson Institute for International Economics was named in his honor in 2006.

Peterson was named the most influential billionaire in U.S. politics.[3]

On August 4, 2010, Peterson signed "The Giving Pledge." He was one of 40 billionaires, led by Bill Gates and Warren Buffett, who agreed to give at least half their wealth to charity.[4]

Peterson was born in Kearney, Nebraska, the son of Venet and George Peterson, Greek immigrants.[5] His father opened and ran a diner in 1923 after changing his name from Georgios Petropoulos. After college, Peterson was first married from 1948 to 1950 to Kris Krengel, a journalism student at Northwestern University.[6] In 1953, he married psychologist Sally Hornbogen Peterson with whom he had four sons: John Scott, James, David and Michael; and one daughter, the writer Holly Peterson.[7][8] The Petersons divorced in 1979.[7] The following year, Peterson married Joan Ganz Cooney, a creator of Sesame Street.[9] In his autobiography he recalls his business and private life in which he blames himself for the failure of two of his three marriages but is now proud of having grown close to his children.[10]

Peterson joined advertising agency McCann Erickson in 1953, again in Chicago, where he served as a director. He joined movie-equipment maker Bell and Howell Corporation in 1958 as Executive Vice President. He later succeeded Charles H. Percy as Chairman and CEO, positions he held from 1963 to 1971. He has been a director of a number of other corporations.

In 1969, he was invited by philanthropist John D. Rockefeller III, CFR Chairman John J. McCloy, and former Treasury Secretary Douglas Dillon to chair a Commission on Foundations and Private Philanthropy, which became known as the Peterson Commission. Among its recommendations adopted by the government were that foundations be required annually to disburse a minimum proportion of their funds.

In 1971, he was named Assistant to the President for International Economic Affairs by U.S. President Richard Nixon. In 1972, he became the Secretary of Commerce, a position he held for one year. At that time he also assumed the Chairmanship of President Nixon’s National Commission on Productivity and was appointed U.S. Chairman of the U.S.–Soviet Commercial Commission.

In 1985, he co-founded with Stephen A. Schwarzman the prominent private equity and investment management firm, the Blackstone Group, and was for many years its chairman.[13] It was the fortune he made at Blackstone, including the $1.9 billion he received when it went public in 2007, that funded many of his charitable and political causes.[14][15] 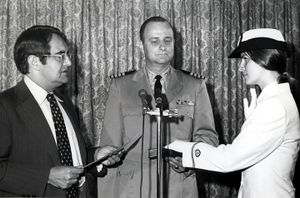 Peterson swearing in the first woman officer of the NOAA Corps.

In 1992, he was one of the co-founders of the Concord Coalition, a bipartisan citizens' group that advocates reduction of the federal budget deficit. Following record deficits under President George W. Bush, Peterson commented in 2004, "I remain a Republican, but the Republicans have become a far more theological, faith-directed party, not troubling with evidence."[16]

In February 1994, President Bill Clinton named Peterson as a member of the Bi-Partisan Commission on Entitlement and Tax Reform co-chaired by Senators Bob Kerrey and John Danforth. He also serves as Co-Chair of the Conference Board Commission on Public Trust and Private Enterprises (Co-Chaired by John Snow).

He succeeded David Rockefeller as Chairman of the Council on Foreign Relations in 1985 and served until his retirement in 2007. He currently serves as Trustee of the Rockefeller family's Japan Society and of the Museum of Modern Art, and was previously on the board of Rockefeller Center Properties, Inc.

Peterson funds The Fiscal Times, a news website that reports on current economic issues, including the federal budget, the growing deficit, entitlements, health care, personal savings, taxation, and the global economy. Fiscal Times contributors and editors include several veteran economics reporters for the New York Times and the Washington Post.

In 2006, Peterson was honored with the Woodrow Wilson Award for Corporate Citizenship by the Woodrow Wilson International Center for Scholars of the Smithsonian Institution. The same year he was elected as a fellow of the American Academy of Arts and Sciences.

From 2007 through 2011, Peterson contributed $458 million to the Peter G. Peterson Foundation, to promote the cause of fiscal responsibility. [18]