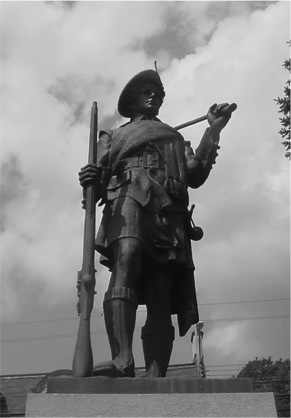 The origin of the name "Pictou" is obscure. Possible Mi'kmaq derivations include "Piktook" meaning an explosion of gas, and "Bucto" meaning fire, possibly related to the coal fields in the area. It might also be a corruption of Poictou, an old province in France. Nicolas Denys named the harbour La rivière de Pictou in the 1660s.[3][4][5]

Pictou was a receiving point for many Scottish immigrants moving to a new home in northern Nova Scotia and Cape Breton Island following the Highland Clearances of the late 18th and early 19th centuries. Consequently, the town's slogan is "The Birthplace of New Scotland"; the first wave of immigrants is acknowledged to have arrived on September 15, 1773, on the Hector.

Pictou County is wholly within the federal electoral district of Central Nova. The county has been represented federally by Conservative MPs since 1957, with the exception of 1993-1997 when a Liberal MP was elected.

The towns of New Glasgow, Stellarton, Pictou, Westville and Trenton each have their own town councils. The Municipality of Pictou County serves the remaining rural areas, including Pictou Island. Amalgamation of these six municipal units is occasionally considered.[9][10] Pictou County District Planning Commission provides planning, development and waste disposal services to all the communities in the county.

Resource based industries include coal mining, forestry, fishing and agriculture. Manufacturing industries include Michelin Tire, Northern Pulp and Scotsburn Dairy. Convergys Inc operate a call center in New Glasgow. Tourism is an important part of the economy during the summer, and in 2006 employed 1200 people and brought 45 million dollars to the economy.[11] Rail car manufacturer Trenton Works was closed in 2007 when owners Greenbrier moved production to Mexico. There are 2,400 small and medium-sized businesses that collectively generate more than 15,000 jobs.[12]

The Pictou County Chamber of Commerce is a business advocacy group that speaks as a united voice on behalf of the business community.

Two highways designated as part of the national Trans-Canada Highway system provide the only controlled-access roads in the county. They are Highway 104, which traverses the county from west to east, and Highway 106 the short north-south spur to the Northumberland Ferries Limited terminal at Caribou.

The Cape Breton and Central Nova Scotia Railway is a freight line connecting Truro to Sydney, with spurs at Stellarton and Trenton serving local industries such as Trenton Generating Station. Via Rail Canada abandoned passenger rail service in the county on January 15, 1990, following nationwide budget cuts.

Trenton Aerodrome is a private commercial airport owned and operated by Sobeys.

Highways and numbered routes that run through the county, including external routes that start or finish at the county limits:[13]

Pictou County is served by the daily newspaper The News and the weekly newspaper The Advocate. The only locally based radio station is CKEC-FM, but stations in other counties and Prince Edward Island also provide coverage. A monthly sports and recreation paper is distributed monthly through the mail at no charge.[14]

There are two performance spaces in the county, the DeCoste Centre in Pictou and Glasgow Square in New Glasgow. Read By The Sea is an annual one day literary festival held in River John. The Hector Festival in Pictou each summer is a celebration of the county's Scottish heritage. New Glasgow's Art at Night is an annual one night art event in downtown New Glasgow. Many of the towns and villages host their own parades and events throughout the year.

Eventide Art Hub in New Glasgow hosts an Art Gallery, Artist Studios, and a retail space for artists and musicians to sell their work.

Museums include the Northumberland Fisheries Museum in Pictou and the Museum of Industry in Stellarton.

There are claims by a Johnston family of Pictou, Nova Scotia that the Mad Trapper of Rat River was Owen Albert Johnston from Pictou County.[19]