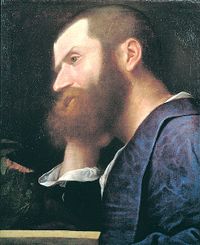 Pietro Aretino, in Titian's first portrait of him 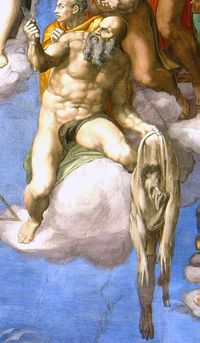 St Bartholomew (Aretino was the model) displaying his flayed skin, in The Last Judgment by Michelangelo. 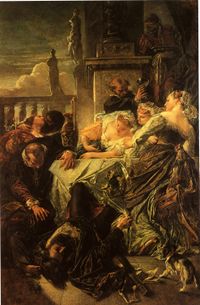 Pietro Aretino (20 April 1492 – 21 October 1556) was an Italian author, playwright, poet, satirist and blackmailer. Despite many of his works being considered indecent, he wielded immense influence on contemporary art and politics.[1]

Born out of wedlock in Arezzo (hence the name Aretino, meaning "from Arezzo"), very casually educated and then banished from his native city, Aretino spent a formative decade in Perugia, before being sent, highly recommended, to Rome. There Agostino Chigi, the rich banker and patron of Raphael, took him under his wing.

When Hanno the elephant, pet of Pope Leo X, died in 1516, Aretino penned a satirical pamphlet entitled "The Last Will and Testament of the Elephant Hanno". The fictitious will cleverly mocked the leading political and religious figures of Rome at the time, including Pope Leo X himself. The pamphlet was such a success that it started Aretino's career and established him as a famous satirist, ultimately known as "the Scourge of Princes".

Aretino prospered, living from hand to mouth as a hanger-on in the literate circle of his patron, sharpening his satirical talents on the gossip of politics and the Papal Curia, and turning the coarse Roman pasquinade into a rapier weapon of satire, until his sixteen ribald Sonetti Lussuriosi (Lust Sonnets) written to accompany Giulio Romano's beautiful but pornographic drawings engraved by Marcantonio Raimondi under the title I Modi finally caused such outrage that he had to temporarily flee Rome.

After Leo's death in 1521, his patron was Cardinal Giulio de' Medici, whose competitors for the papal throne felt the sting of Aretino's scurrilous lash. The installation of the Dutch pope Adrian VI ("la tedesca tigna" in Pietro's words) instead encouraged Aretino to seek new patrons away from Rome, mainly with Federico II Gonzaga in Mantua, and with the condottiero Giovanni de' Medici ("Giovanni delle Bande Nere"). The election of his old Medici patron as Pope Clement VII sent him briefly back to Rome, but death threats and an attempted assassination by one of the victims of his pen, Bishop Giovanni Giberti, in July 1525, set him wandering through northern Italy in the service of various noblemen, distinguished by his wit, audacity and brilliant and facile talents, until he settled permanently in 1527, in Venice, which was the most anti-Papal city of Italy, "seat of all vices" Aretino noted with gusto. 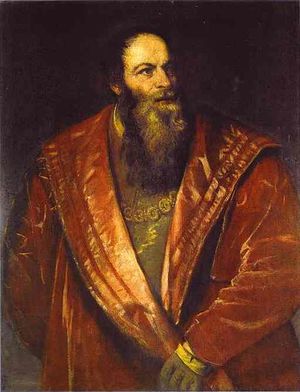 Aretino was bisexual and made no secret of the fact that his homosexual urges were entirely towards boys, not adult men. Like everyone in the Renaissance, he took it for granted that pederasty was the usual form of male homosexual behaviour. In a letter to Giovanni de' Medici written in 1524 Aretino enclosed a satirical poem saying that due to a sudden aberration he had "fallen in love with a female cook and temporarily switched from boys to girls..." (My Dear Boy). In his comedy Il marescalco, the lead man is overjoyed to discover that the woman he has been forced to marry is really a page boy in disguise. While at court in Mantua he developed a crush on a young man called Bianchino, and annoyed Duke Federico with a request to plead with the boy on the writer's behalf.[2]

Unlike some of his contemporaries, Aretino had no time for pretentious theories of Platonic love. He dismissed them as hypocritical and preferred a frank confession of his vice and lust. He acted as a pimp for members of the Gonzaga family, rulers of Mantua, and their court. Surviving letters show that he procured boys in 1528 for the bed of Francesco Gonzaga. Rictor Norton the pro-LGBT historian is happy to regard this as “love” and include it in his anthology of “gay” love letters. [3]

Safe in Venice, Aretino became a blackmailer, extorting money from men who had sought his guidance in vice. He "kept all that was famous in Italy in a kind of state of siege", in Jakob Burckhardt's estimation. Francis I of France and Charles V pensioned him at the same time, each hoping for some damage to the reputation of the other. "The rest of his relations with the great is mere beggary and vulgar extortion," according to Burckhardt. Addison states that "he laid half Europe under contribution".[ref]Spectator 203, March 27, 1711.[/ref]

One critic writes "His literary talent, his clear and sparkling style, his varied observation of men and things, would have made him a considerable writer under any circumstances, destitute as he was of the power of conceiving a genuine work of art, such as a true dramatic comedy; and to the coarsest as well as the most refined malice he added a grotesque wit so brilliant that in some cases it does not fall short of that of Rabelais."

—Jacob Burckhardt, The Civilization of the Renaissance in Italy, 1855.

Apart from both sacred and profane texts—a satire of high-flown Renaissance Neoplatonic dialogues is set in a brothel — and comedies such as La cortigiana and La talenta, Aretino is remembered above all for his letters, full of literary flattery that could turn to blackmail. They circulated widely in manuscript and he collected them and published them at intervals winning as many enemies as it did fame, and earned him the dangerous nickname Ariosto gave him: flagello dei principi ("scourge of princes"). The first English translations of some of Aretino's racier material have been coming onto the market recently.

La cortigiana is a brilliant parody of Castiglione's Il Cortegiano, and features the adventures of a Sienese gentleman, Messer Maco, who travels to Rome to become a cardinal. He would also like to win himself a mistress, but when he falls in love with a girl he sees in a window, he realizes that only as a courtier would he be able to win her. In mockery of Castiglione's advice on how to become the perfect courtier, a charlatan proceeds to teach Messer Maco how to behave as a courtier: he must learn how to deceive and flatter, and sit hours in front of the mirror.

Aretino was a close friend of Titian, who painted his portrait (illustrations) at least three times. The early portrait is a psychological study of alarming modernity. Clement VII made Aretino a Knight of Rhodes, and Julius III named him a Knight of St. Peter, but the chain he wears for his 1545 portrait may have merely been jewelry. In his strictly-for-publication letters to patrons Aretino would often add a verbal portrait to Titian's painted one.

Aretino is frequently mentioned in English works of the Elizabethan and later periods and differently appreciated, in comments ranging from 'It was one of the wittiest knaves that ever God made' of Nashe (The Unfortunate Traveller) to 'that notorious ribald of Arezzo' of Milton (Areopagitico) [4]

He is said to have died of suffocation from "laughing too much".[5] The English traveller Sir John Reresby visited "the obscene profane poet" Aretino's grave in San Luca, Venice in the mid-1650s. He relates that the following epitaph had been removed by the inquisitors: "Qui jace Aretin, poeta Tusco, qui dice mal d'ogni uno fuora di Dio; scusandosi dicendo, Io no'l cognosco." This he translates as "Here Aretin, the Tuscan poet, lies, who all the world abused but God, and why? he said he knew him not."[6]

In 2007, the composer Michael Nyman set Aretino's Sonnetti Lussoriosi to music under the title 8 Lust Songs. Once again, Aretino's texts proved controversial: at a 2008 performance at Cadogan Hall, the printed programs were withdrawn following allegations of obscenity.[7]