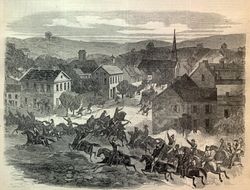 The American Civil War (1861–1865) was a sectional rebellion against the United States of America by the Confederate States, formed of eleven southern slave states' governments which moved to secede from the Union after the 1860 election of Abraham Lincoln as President of the United States. The Union's victory was eventually achieved by leveraging advantages in population, manufacturing and logistics and through a strategic naval blockade denying the Confederacy access to the world's markets.

In many ways, the conflict's central issues – the enslavement of African Americans, the role of constitutional federal government, and the rights of states  – are still not completely resolved. Not surprisingly, the Confederate army's surrender at Appomattox on April 9, 1865 did little to change many Americans' attitudes toward the potential powers of central government. The passage of the Thirteenth, Fourteenth and Fifteenth amendments to the Constitution in the years immediately following the war did not change the racial prejudice prevalent among Americans of the day; and the process of Reconstruction did not heal the deeply personal wounds inflicted by four brutal years of war and more than 970,000 casualties – 3 percent of the population, including approximately 560,000 deaths. As a result, controversies affected by the war's unresolved social, political, economic and racial tensions continue to shape contemporary American thought. The causes of the war, the reasons for the outcome, and even the name of the war itself are subjects of much discussion even today.

Following Abraham Lincoln's election in 1860, Florida joined other Southern states in seceding from the Union. Secession took place January 10, 1861, and, after less than a month as an independent republic, Florida became one of the founding members of the Confederate States of America. Although the vote to secede passed 62-7, there was a relatively large and vocal pro-Union and anti-Confederate minority in the state, an element that grew as the war progressed.

Florida being an important supply route for the Confederate Army, Union forces operated a blockade around the entire state. Union troops occupied major ports such as Cedar Key, Jacksonville, Key West, and Pensacola. Confederate forces moved quickly to seize control of many of Florida's U.S. Army forts, succeeding in most cases with the significant exceptions of Fort Zachary Taylor and Fort Pickens, which stayed firmly in Federal control throughout the war.

Overall, the state raised some 15,000 troops for the Confederacy, which were organized into twelve regiments of infantry and two of cavalry, as well as several artillery batteries and supporting units. Since neither army aggressively sought control of Florida, many of Florida's best home-raised troops instead serving in Virginia in the Army of Northern Virginia under Brig. Gen. Edward A. Perry and Col. David Lang. The "Florida Brigade" fought with distinction in many of Robert E. Lee's campaigns, and twice charged Cemetery Ridge during the Battle of Gettysburg, including supporting Pickett's Charge.

John Fulton Reynolds (September 20, 1820 – July 1, 1863) was a career United States Army officer and a general in the American Civil War. One of the Union Army's most respected senior commanders, despite having a relatively limited amount of combat experience in the war, he played a key role in committing the Army of the Potomac to the Battle of Gettysburg and was killed at the very start of the battle.

Reynolds was nominated to the United States Military Academy in 1837 by Senator James Buchanan, a family friend, and graduated 26th of 50 cadets in the class of 1841. He was commissioned a brevet second lieutenant in the 3rd U.S. Artillery, assigned to Fort McHenry. He was awarded two brevet promotions in Mexico—to captain for gallantry at Monterrey and to major for Buena Vista, where his section of guns prevented the Mexican cavalry from outflanking the American left.

Soon after the start of the Civil War, Reynolds was offered the position as aide-de-camp to Lt. Gen. Winfield Scott, but declined. He was appointed lieutenant colonel of the 14th U.S. Infantry, but before he could engage with that unit, he was promoted to brigadier general on August 20, 1861, and ordered to report to Washington, D.C. While in transit, his orders were changed to report to Cape Hatteras Inlet, North Carolina. Maj. Gen. George B. McClellan intervened with the Secretary of War to get Reynolds's orders changed once again, assigning him to the newly formed Army of the Potomac. His first assignment was with a board that examined the qualifications of volunteer officers, but he soon was given command of a brigade of Pennsylvania Reserves. 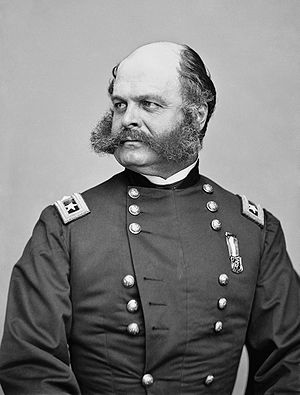 Ambrose Burnside, a Union Army general who would go on to serve as Governor of Rhode Island and as a United States Senator representing the state