Norbert was a friend of Bernard of Clairvaux and was largely influenced by the Cistercian ideals as to both the manner of life and the government of his order. As the Premonstratensians are not monks but Canons Regular, their work often involves preaching and the exercising of pastoral ministry; they frequently serve in parishes close to their abbeys or priories.[2]

The order was founded in 1120.[3] Saint Norbert had made various efforts to introduce a strict form of canonical life in various communities of canons in Germany; in 1120 he was working in the now-extinct Ancient Diocese of Laon, in Picardy, northeastern France. There, in a rural place called Prémontré, he and thirteen companions established a monastery to be the cradle of a new order. As they were canons regular, they followed the Rule of St. Augustine, but with supplementary statutes that made their life one of great austerity.[2] Common prayer and celebration of the Eucharist was to be the sustaining dynamic of the community.[4] 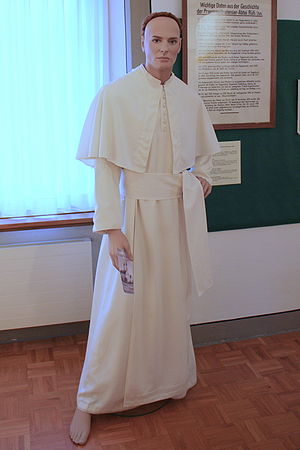 In 1126, when the order received papal approbation by Pope Honorius II, there were nine houses; others were established in quick succession throughout western Europe, so that at the middle of the fourteenth century there were some 1,300 monasteries for men and 400 for women. The Norbertines played a predominant part in the conversion of the Wends and the bringing of Christianity to the territories around the Elbe and the Oder. In time, mitigations and relaxations emerged, and these gave rise to reforms and semi-independent congregations within the Order.[2]

The Norbertines arrived in England about 1143, first at Newhouse in Lincoln, England; before the dissolution under Henry VIII there were 35 houses.[2] Soon after their arrival in England, they founded Dryburgh Abbey in the Borders area of Scotland, which was followed by other communities at Whithorn Priory, Dercongal Abbey and Tongland Abbey all in the Borders area, as well as Fearn Abbey in the northern part of the nation. Like most orders they were almost completely devastated by the successive onslaughts of the Reformation, French Revolution, and Napoleon, but then experienced a revival in the 19th century.[5]

By the beginning of the nineteenth century the order had become almost extinct, only eight houses surviving, all in the Habsburg Monarchy.[2] However, there was something of a resurgence, and at the start of the twentieth century there were 20 monasteries and 1000 priests. As of 2005[update], the number of monasteries had increased to nearly 100 and spread to every continent. In 1893, Father Bernard Pennings and two other Norbertines from Berne Abbey arrived in the United States of America to minister to Belgian immigrants in northern Wisconsin. De Pere, Wisconsin became the site of the first Norbertine Abbey in the new world.[6]

By their nature as canons regular the Premonstratensians have always engaged in pastoral work of various kinds, including what would now be called retreat centres (nearly everywhere), and care for pilgrims (as at Conques) and, like many religious houses, have often run schools on a variety of scales (Averbode Abbey, Berne Abbey, United States, Australia). In order to support themselves, the different communities have down the centuries, and in modern times, operated small-scale manual activities (SME) such as printing (Averbode Abbey, Tongerlo Abbey, Berne Abbey), farming (Kinshasa, Ireland, Postel Abbey), forestry (Schlägl Abbey, Geras Abbey, Slovakia), and cheese-making (Postel Abbey). They have also entered agreements with breweries (Tongerlo Abbey, Postel Abbey, Park Abbey, Leffe, Grimbergen) and undertaken artistic bookbinding (in Oosterhout).[7] Other activities have included the running of an astronomical observatory (Mira, Grimbergen).

The Feast of All Norbertine Saints and Blesseds is celebrated internally on November 13.[8]

The Norbertines have also had major in the area of Green Bay, Wisconsin, owning WBAY television and radio stations until the mid 1970s. The Nobertines also ran two local boys high schools until 1990 and still run four local schools in De Pere and Green Bay. Among these schools is St. Norbert College, the only Norbertine higher education institution in the world.[9] 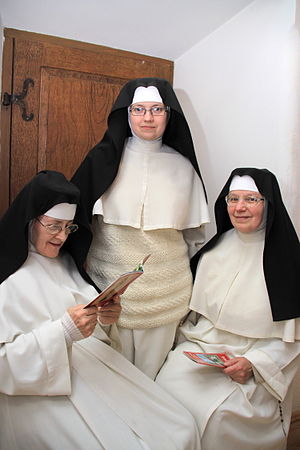 The Order has several abbeys of women who, though technically called canonesses, follow the life of an enclosed religious order and are therefore more commonly termed Norbertine nuns. Like the Norbertine communities for men, those for women are autonomous. Unusually, within the religious communities of the Catholic Church, the Norbertine Order has always seen the spiritual life of the canonesses as being on an equal footing with that of its priests and lay brothers. In the Middle Ages, the Premonstratentians even had a few double monasteries,[10] where men and women lived in cloisters located next to each other as part of the same abbey, the communities demonstrating their unity by sharing the church building. Today, it is common for a foundation of canonesses to have links not only with other canonesses, but also with a community of canons.

As each abbey or priory is autonomous, practices and apostolates differ; some are contemplative in character whilst others are highly active in pastoral ministry. However, each is guided by the Rule of Saint Augustine as well as the Constitutions established by the General Chapter which is held every 6 years. Demonstrating Norbertine unity, the general Chapter includes representatives from both male and female communities. The head of the Order, termed Abbot General, resides in Rome, and he is assisted in his duties by the Definitors (High Council) as well as commissions established for various aspects of the Order's life such as liturgy and inter-abbey communications.

There are seven circaries (Premonstratensian term for an ecclesiastical province[11]):[12]

Norbertines celebrate "all Norbertine Saints and Blesseds" on Nov. 13.[22]

St. Norbert College in De Pere, Wisconsin, United States is the only institution of higher education sponsored by the Order. Elsewhere they also sponsor/operate schools or serve in pastoral care capacities at parish schools.

Schools founded or sponsored by the order include:

Northern Ireland's Historical Abuse Inquiry investigated reports that Brendan Smyth, a member of the Norbertine Order, was allowed to continue paedophilia for more than four decades, even after Smyth himself had admitted in 1994, the same year that he was jailed for his crimes, that "Over the years of religious life it could be that I have sexually abused between 50 and 100 children. That number could even be doubled or perhaps even more."[24][25][26] Reviewers of the case agree that there was a deliberate plot to conceal Smyth's behaviour, incompetence by his superiors at Kilnacrott Abbey.