For other uses, see Professor (disambiguation).
For a broader coverage related to this topic, see Faculty (academic staff).

A professor, informally often known as full professor, is the highest academic rank at universities and other post-secondary education and research institutions in most countries. Literally, professor derives from Latin as a "person who professes" being usually an expert in arts or sciences, a teacher of the highest rank.[1] In some countries, the word professor is also used in titles of lower ranks such as associate professor and assistant professor.

Professors conduct original research and commonly teach undergraduate, graduate, or professional courses in their fields of expertise. In universities with graduate schools, professors may mentor and supervise graduate students who are conducting research for a thesis or dissertation. Professors typically hold a Ph.D., another doctorate or a different terminal degree. Some professors hold a master's degree or a professional degree such as an MD as their highest degree.[citation needed] 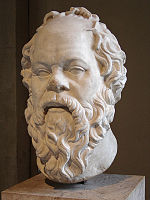 The Ancient Greek philosopher Socrates was one of the earliest recorded professors.[5]

Beyond holding the proper academic title, universities in many countries also give notable artists, athletes and foreign dignitaries the title honorary professor, even if these persons do not have the academic qualifications typically necessary for professorship. However, such "professors" usually do not undertake academic work for the granting institution. In general, the title of professor is strictly used for academic positions rather than for those holding it on honorary basis.

Professors are qualified experts in their field who generally perform the following tasks:

Other roles of professorial tasks depend on the institution, its legacy, protocols, place (country), and time. For example, professors at research-oriented universities in North America and, generally, at European universities, are promoted primarily on the basis of research achievements and external fund-raising success. Depending on the professor's professional status, expertise, and tenure, he or she may also serve as a public intellectual, offering opinions to media and in other forums on current events and other complex matters that may require erudite illumination.

A tenured professor has an appointment that lasts until retirement age, except for dismissal with just cause. A common justification for existence of such a privileged position is the principle of academic freedom, which holds that it is beneficial for state, society and academy in the long run if scholars are free to examine, hold, and advance controversial views without fear of dismissal from their jobs.[citation needed]

Some have argued that modern tenure systems actually diminish academic freedom, forcing those seeking tenured positions to profess conformance to the same views (political and academic) as those awarding the tenured professorships. According to physicist Lee Smolin, "...it is practically career suicide for a young theoretical physicist not to join the field [of string theory]."[6] However, in institutions without tenure systems, academic freedom and the ability to espouse non-conformist views are afforded no protections.[citation needed] Tenure has enabled some academics, such as the American professor Noam Chomsky, to espouse controversial positions.

Many colleges and universities and other institutions of higher learning throughout the world follow a similar hierarchical ranking structure amongst scholars in academia; the list above provides details.

In Muslim civilisation, the chair was designated by the caliph himself. Mostly through recommendation, the caliph made appointments to a professorial chair (Kursi in Arabic) in a jami’ (university or congregational madrasah). Such was the case of Ibn 'Aqil (died 1119 CE) who was appointed to a well-known chair in Jami' al-Mansur (Baghdad), becoming the main teacher of the madrasah. In other cases, a scholar could be appointed to two chairs at the same time, holding a chair in one jami’ and simultaneously holding another in another jami’ or in one of the exclusive institutions.[7]

This is the case of particularly distinguished and popular scholars. For example, a certain Ibn al-Banna' (d. 1079) had a chair in Jami' al-Mansur (Baghdad), located in the centre of the riwaq (nave of the mosque), while simultaneously holding another in Jami' al-Qasr (also Baghdad), around the maqsura (a separate room inside the mosque). Some chairs were also known by the discipline they represented; as, for instance, the chair or study-circle of the traditionalists (halqat ahl al-hadith), and that of the grammarians (halqat al-nahwiyin). Others were known by the name of the family whose members occupied it in succession; as, for instance, the chair of the Barmakids (halqat al-Barâmika). Sometimes institutions were specialised in particular study and therefore received a corresponding chair, e.g. the Nizamiya did not have a chair of Islamic theology, but only a chair of Islamic law.[8]

As to tenure of the chair, once a professor was appointed by the caliph to a chair in one of the main madrasahs (Jamii), he ordinarily held it for the remainder of his lifetime. Cases of lengthy tenure are often reported by biographers, for example Abu 'All al-Kattani (d. 1061), who was in his eighties when he died, had occupied his chair for 50 years. According to George Makdisi and Hugh Goddard, "the fact that we still talk of professors holding the 'chair' of their subject" is thought to allegedly be based on the "traditional Islamic pattern of teaching where the professor sits on a chair and the students sit around him", and the term 'academic circles' may be derived from the way Islamic students "sat in a circle around their professor, although the ancient Greeks and Romans did this long before, and it is believed Islamic culture took this from these cultures."[9] The term 'professor' itself is believed a translation of the Arabic term mufti by Islamic interpretations, which meant "professor of legal opinions, however the word 'professor' was derived long before Islamic culture was formed, in the time of the Ancient Greeks and Romans."[10] 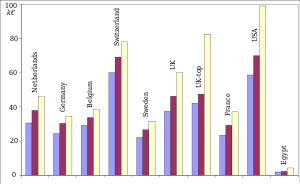 Salary of professors, as reported in the 2005 report the de (Deutscher Hochschulverband) DHV. Bars are for assistant professor, associate professor and full professor, respectively.

In interest of an expert's report from 2005 of the "Deutscher Hochschulverband DHV",[11] a lobby of the German professors, the salary of professors in the United States, Germany and Switzerland is as follows:

Professor Moriarty from the Sherlock Holmes story "The Final Problem"

Traditionally, as portrayed in fiction, in accordance with a stereotype, professors are often depicted as being shy and absent-minded. Obvious examples include the 1961 movie The Absent-Minded Professor, or Professor Calculus who features in The Adventures of Tintin stories. Professors have also been portrayed as being misguided, such as Professor Metz, who helped the villain Blofeld in the James Bond film Diamonds Are Forever; or simply evil, like Professor Moriarty, who is the archenemy of Sherlock Holmes. The animated series Futurama has a typical absent-minded but genius-level professor named Professor Hubert Farnsworth. (See also mad scientist.) Vladimir Nabokov, author and professor of English at Cornell, frequently used professors as the protagonists in his novels. Professor Henry Higgins is also a main character in My Fair Lady. In the popular Harry Potter series, a few students are the most important characters, but all their magic and wizarding teachers are known as professors, who play many important parts. In the board game Cluedo, Professor Plum has been depicted as absent-minded. In the movie Clue, Professor Plum was a psychologist who had an affair with one of his patients. He was played by Christopher Lloyd.

In more recent times various stereotypes were being re-evaluated and professors are one of them. The mainstream literature began to realize that many professors are just normal human beings and might be quite well-rounded in abilities, excelling both in intelligence and in action. An example of a fictional professor not depicted as shy or absent-minded is Indiana Jones, a professor as well as an archeologist-adventurer. The airing of Indiana Jones movie franchise had a significant impact on the previous stereotype, and created a new archetype which is both deeply knowledgeable and physically capable. The character generally referred to simply as the Professor on the television series, Gilligan's Island, although described alternatively as a high-school science teacher or research scientist, is depicted as a sensible advisor, a clever inventor, and a helpful friend to his fellow castaways. John Houseman's portrayal of law school professor Charles W. Kingsfield, Jr., in The Paper Chase (1973) remains the epitome of the strict, authoritarian professor who demands perfection from students.

Mysterious, older men with magical powers (and unclear academic standing) are sometimes given the title of "Professor" in literature and theater. Notable examples include Professor Marvel in The Wizard of Oz[14] and Professor Drosselmeyer (as he is sometimes known) from the ballet The Nutcracker. Also, the magician played by Christian Bale in the film, The Prestige,[15] adopts 'The Professor' as his stage name. A variation of this type of non-academic professor is the "crackpot inventor," as portrayed by Professor Potts in the film version of Chitty Chitty Bang Bang or the Jerry Lewis-inspired Professor Frink character on The Simpsons. Other professors of this type are the thoughtful and kind Professor Digory Kirke of C.S. Lewis' Chronicles of Narnia.

The title has been used by comedians, such as "Professor" Irwin Corey and Soupy Sales in his role as "The Big Professor." In the past, pianists in saloons and other rough environments have been called "professor."[16] The puppeteer of a Punch and Judy show is also traditionally known as a "professor."