The predominant religions in Northeast China (including the provinces of Liaoning, Jilin and Heilongjiang, historically also known as Manchuria) are Chinese folk religions led by local shamans. Taoism and Chinese Buddhism were never well established in this region of recent Han Chinese settlement (Han people began to be a large part of the population only by the Qing dynasty). For this reason the region has been a hotbed for folk religious and Confucian sects, which provide a structure, clergy, scriptures and ritual to the local communities.[2] The Way of the Return to the One, the Universal Church of the Way and its Virtue, and more recently the Falun Gong,[3] have been the most successful sects in Manchuria, claiming millions of followers. Schools of Tibetan Buddhism, traditionally transmitted by the region's Mongol minorities, have made inroads also among Han Chinese.

The native Manchu population, today mostly assimilated to the Han Chinese, practices Han religions but has also maintained pure Manchu shamanism. The local folk religion of the Han has developed many patterns inherited from Manchu and Tungus shamanism, making it different from central and southern folk religion.

According to surveys conducted in 2007 and 2009, 7.73% of the population believes and is involved in cults of ancestors, while 2.15% of the population identifies as Christian.[1] The reports didn't give figures for other types of religion; 90.12% of the population may be either irreligious or involved in worship of nature deities, Buddhism, Confucianism, Taoism, folk religious sects, and small minorities of Muslims. The Mongol minority mostly practices Mongolian folk religion and Tibetan-originated schools of Buddhism, while the Korean minority is mostly affiliated to Korean shamanism and Christianity.

Temple of the Chenghuangshen of Xingcheng, Liaoning, with statue of the goddess Guanyin in front of the main hall.

People gathering at the Temple of the Fox God/dess in Mukden (Shenyang, Liaoning) in 1936. 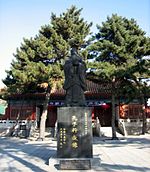 Confucius at the Temple of the God of Culture of Harbin, Heilongjiang.
Main article: Northeast China folk religion

The Chinese folk religion practiced by the Han Chinese who migrated in large numbers in the region by the Qing dynasty has absorbed and developed patterns of deities and rituals from the pre-existing indigenous religions of the Manchu and the other Tungusic peoples, making the folk religion of northeastern China different from the folk religion of central and southern provinces of China. Among these influences is the shamanic tradition of the region, known as chuma xian (出马仙, "riding (for) the immortal gods"). Forms of the Fox God/dess (Huxian 狐仙), generally Great Father Fox (Húsān Tàiyé 胡三太爷) and Great Mother Vixen (Húsān Tàinǎi 胡三太奶), are the most revered deity in the region, with clear parallels in the Japanese cult of Inari Ōkami.[4]

According to the 2007 Chinese Spiritual Life Survey, 7.73% of the population believes and is involved in the traditional Chinese religion of the lineage, that is the worship of the divine ancestors of a kin (group of families sharing the same surname and descending from the same patriarchs) in networks of lineage churches and their ancestral shrines.[1] Taoism and Confucianism have developed in the region since the 1980s.

Northeast China (Manchuria) has been a hotbed for salvationist sects of the folk religion mostly introduced from Shandong and Hebei. They developed greatly throughout the 20th century. The Yiguandao (一貫道 "Consistent Way") had a strong presence in the area,[5] but were especially the Guiyidao (皈依道 "Way of the Return to the One") and the Universal Church of the Way and its Virtue (万国道德会 Wànguó Dàodéhuì) to have millions of followers in northeastern China. In the 1930s the Wanguo Daodehui had 8 million followers, one-fourth of the population of the region.[6]

The Holy Church of the Confucian Way (儒门圣教 Rúmén Shèngjiào, also "Confucian Gate Shengism", 门 mén meaning figuratively a "way" as a "gate[way]") is a folk religious tradition widespread in modern-day Liaoning,[7] with apparent links (at least by name) with the Ruzong Luandao ("Confucian Traditional Phoenix Way")[8] and the Shengdao ("Holy Way") clusters of sects.

Among folk religious sects, the Falun Gong was founded in the 1990s in Jilin by Li Hongzhi, and was widespread mostly in northeastern China at the time when it was outlawed by the central government.[3]

Taulayitu-gegen Temple, a Tibetan Buddhist institution on the boudary between Jilin and Inner Mongolia.

The Jade Buddha of Anshan (Jade Buddha Palace) is possibily the largest piece of jade in the world.
Main articles: Chinese Buddhism and Tibetan Buddhism

The region is home to Chinese Buddhist schools and traditions and Tibetan Buddhist traditions, which are popular among Mongols as well as increasingly among Manchus and Han Chinese. The Jile Temple is an important Chinese Buddhist centre in Harbin. 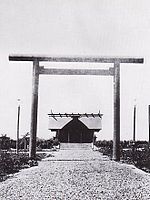 Japanese Shinto shrine of Qiqihar, Heilongjiang (photo taken prior to 1945).

During the period of the Japanese occupation (1931) and the Manchukuo (1932–1945) the Japanese conducted scholarly research on the local folk religion[9] and established Shinto shrines, although without trying to impose Shinto on the native populations as it was the case in occupied Korea and occupied Taiwan, as the Manchurian State was conceived as a spiritually autonomous nation.[10]

Many Japanese new religions, or independent Shinto sects, proselytised in Manchuria establishing hundreds of congregations. Most of the missions belonged to the Omoto teaching, the Tenri teaching and the Konko teaching of Shinto.[11] The Omoto teaching is the Japanese near equivalent of Guiyidao, as the two religions have common roots and history.

The Xita Church of Korean Protestants in Xita, Shenyang, Liaoning. 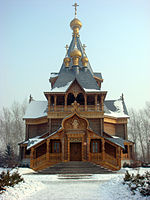 According to the Chinese General Social Survey of 2009, Christianity is the religion of 2.15% of the population of the region.[1] Many Christians are reportedly Koreans.[12] Christianity has a strong presence in the Yanbian Korean Autonomous Prefecture, in Jilin.[13] The Christianity of Yanbian Koreans has a patriarchal character; Korean churches are usually led by men, in contrast to Chinese churches which more often have female leadership. For instance, of the 28 registered churches of Yanji, only three of which are Chinese congregations, all the Korean churches have a male pastor while all the Chinese churches have a female pastor.[14]

The Daowai Mosque in Harbin.

Northeast China is home to a small number of Hui Chinese who traditionally follow Islam.