Richard David Bach (born June 23, 1936)[1] is an American writer. He is widely known as the author of the hugely popular 1970s best-sellers Jonathan Livingston Seagull (1970) and Illusions: The Adventures of a Reluctant Messiah (1977), among others. He has authored numerous works of fiction and non-fiction, including One (1989), and Out of My Mind (1999).

Most of his books have been semi-autobiographical, using actual or fictionalized events from his life to illustrate his philosophy. Bach's books espouse his philosophy that our apparent physical limits and mortality are merely appearance. Bach is noted for his love of aviation and for his books related to flying in a metaphorical context. He has pursued flying as a hobby since the age of 17. In late August 2012, Bach was badly injured when on approach to landing at Friday Harbor, Washington, his aircraft clipped some power lines and crashed upside down in a field.

Bach's first airplane flight occurred at age 15, when his mother was campaigning for a seat on the council of Long Beach, California. Her campaign manager, Paul Marcus, mentioned that he flew airplanes, and invited Richard on a flight in his Globe Swift.[2]

Bach served in the United States Navy Reserve, then in the New Jersey Air National Guard's 108th Fighter Wing, 141st Fighter Squadron (USAF), as a Republic F-84F Thunderstreak fighter pilot. He then worked at a variety of jobs, including as a technical writer for Douglas Aircraft and as a contributing editor for Flying magazine. He served in the USAF reserve and was deployed in France in 1960. He later became a barnstormer.

During the summer of 1970, Bach and his friend Chris Cagle traveled to Ireland, where they participated in flying sequences for Roger Corman's film Von Richthofen and Brown. They flew a variety of World War I aircraft of the Blue Max collection owned by ex-RCAF pilot Lynn Garrison. Bach and Garrison first met when Bach wrote articles for Avian, Garrison's aviation publication.

Most of Bach's books involve flight in some way, from the early stories which are straightforwardly about flying aircraft, to Stranger to the Ground, his first book, to his later works, in which he used flight as a philosophical metaphor.

In 1970, Jonathan Livingston Seagull, a story about a seagull who flew for the love of flying rather than merely to catch food, was published by Macmillan Publishers after the manuscript was turned down by several others. The book, which included unique photos of seagulls in flight by photographer Russell Munson, became a number-one bestseller. The book contained fewer than 10,000 words, yet it broke all hardcover sales records since Gone with the Wind. It sold more than 1,000,000 copies in 1972 alone.[3] The surprise success of the book was widely reported in the media in the early 1970s.[4] 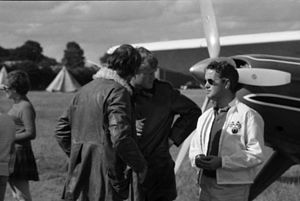 In 1973, Jonathan Livingston Seagull was turned into a film of the same name, produced by Paramount Pictures Corporation, with a soundtrack by Neil Diamond.

In 1975, Bach was the driving force behind Nothing by Chance, a documentary film, based on his book of the same name. The film centers on modern barnstorming around the United States in the 1970s. Bach recruited a group of his friends who were pilots to recreate the era of the barnstormer.[5]

A second book, Illusions: The Adventures of a Reluctant Messiah, published in 1977, tells of an encounter with a modern-day messiah who has decided to quit.

On August 31, 2012, Bach was injured in an aircraft landing accident on San Juan Island in Washington. He was landing his aircraft, a 2008 Easton Gilbert G Searey (N346PE) that he nicknamed "Puff", at a private airport when the landing gear clipped some power lines. He crashed upside down in a field about two miles from Friday Harbor, taking down two poles and sparking a small grass fire.[6]

The day after the accident, Bach was reported to be in serious but stable condition with a head injury and broken shoulder.[7] Bach was hospitalized for four months. He reported that his near-death experience inspired him to finish the fourth part of Jonathan Livingston Seagull, which had been originally published in three parts.[8]

In December 2012, Publishers Weekly reported that Travels with Puff, the book Bach wrote about crossing the United States in "Puff", had been sent to his publisher the day before his accident.[9] Travels with Puff was released on March 19, 2013.

In 2014, Bach published his long-awaited sequel to Illusions: The Adventures of a Reluctant Messiah, which he called Illusions II: The Adventures of a Reluctant Student. The story incorporates Bach's real-life aircraft crash, with the author imagining he is being visited by the "messiah" Don Shimoda, who helps him through his difficult medical recovery. Other fictional characters and references also appear.

Bach had six children with his first wife, Bette, also a pilot and the author of Patterns: Tales of Flying and of Life, about her life as a pilot and single mother. She typed and edited most of Richard's aviation writing. They divorced in 1970. Their son Jonathan is a software engineer and journalist who wrote Above the Clouds, about growing up without knowing his father and then later meeting him as a college student. (Richard Bach gave his approval, although he noted that it included some personal history he would "rather not see in print").[10] Their other children are: Robert, a commercial airline pilot; Kristel; James Marcus Bach, a computer expert and writer; Erika; and their youngest daughter, Bethany, who was killed in an accident at age 15 in 1985.

In 1977, Bach married actress Leslie Parrish, whom he met during the making of the film Jonathan Livingston Seagull. She featured significantly in two of his subsequent books: The Bridge Across Forever and One, which primarily focused on their relationship and Bach's concept of soulmates. They divorced in 1997.[11] Bach married his third wife, Sabryna Nelson-Alexopoulos in April 1999.

The book Curious Lives is in fact the above five Ferret Chronicles books collected in one volume, the only changes being changes to the titles of each of the five.