Robert Kenneth "Bob" Dornan (born April 3, 1933) is a Republican and former member of the United States House of Representatives from California and a vocal advocate of pro-life and social conservative causes.

A boisterous former actor and television talk show host, Dornan had a flair for the dramatic that drew him supporters and detractors well beyond his congressional districts. Though never a major power in Washington, he became one of the most well-known members of the House of Representatives and has been described as "one of the leading firebrands among American politicians."[1]

Dornan was born in New York City, New York, the son of Gertrude Consuelo (McFadden) and Harry Joseph Dornan.[2] He attended Loyola University of Los Angeles (later renamed Loyola Marymount University) until 1953. At age 19, Dornan volunteered to join the United States Air Force. During his time in the USAF, he survived two emergency parachute ejections and two "dead stick" forced landings (including one of an F-100). Dornan also served as a photographer during the Vietnam War and flew relief flights into Biafra. He was an active duty serviceman in USAF until 1958, reaching the rank of Captain.[3] He then served in the Air Force Reserve until 1975.[3]

Bob Dornan took an active role in the civil rights movement. He took part in the historic 1963 March on Washington led by Martin Luther King Jr. The following year he helped register African Americans to vote in Mississippi.[4][5][6]

Dornan was involved in the entertainment industry. He starred in the film The Starfighters, cast as a U.S. congressman and father of an Air Force pilot, Lt. Witkowski. The Starfighters aired on Mystery Science Theater 3000.

In 1962, he portrayed Air Force Lieutenant Alden in the episode "Dennis at Boot Camp" of the CBS sitcom, Dennis the Menace, starring Jay North and Gale Gordon, with Roy Roberts in this segment as Captain Stone.[7]

Dornan had a frequent role as Captain Fowler on ABC's Twelve O'Clock High television series and smaller roles on ABC's Bewitched and NBC's I Dream of Jeannie. Dornan was an Emmy-award winning television talk show host on Tempo and The Robert K. Dornan Show broadcast from Los Angeles from 1967 to 1973.

Dornan moved into politics in 1973 as national spokesman for the Citizens for Decency Through Law advocacy group. He made an unsuccessful run for mayor of Los Angeles the same year. In 1976, Dornan was elected to the House of Representatives, representing the 27th Congressional District in western Los Angeles County. He was re-elected twice. He was such an unswerving advocate for the development of the B-1 bomber, that he was soon nicknamed "B-1 Bob."

After the 1980 census, California's congressional map was redrawn. Dornan's district, previously a Republican-leaning swing district, was made significantly more Democratic. Believing he had no chance of winning this new district, he opted to run for the United States Senate in 1982. He finished fourth in the Republican primary behind San Diego mayor and future Governor Pete Wilson, who won in November. 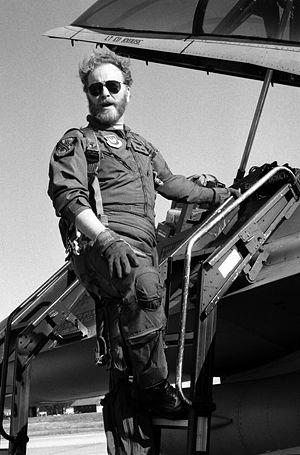 Dornan standing on the ladder of an F-16 Fighting Falcon aircraft during a visit to Torrejon Air Base, Spain, 20 September 1988

Dornan moved to Garden Grove, in the more Republican Orange County. In 1984, he was elected to Congress from the 38th District in central Orange County, defeating 10-year Democratic incumbent Jerry M. Patterson by a 53% to 45% margin amid Ronald Reagan's massive landslide that year. In 1986, he won a tough race against Democratic state Assemblyman Richard Robinson, winning by a 55% to 43% margin. He was re-elected four more times and served on the Intelligence Committee. His district was renumbered as the 46th District after the 1990 Census.

Dornan made headlines in March 1985 for a confrontation with Representative Thomas Downey (D-NY) on the House floor. Downey asked Dornan about comments he had made calling Downey "a draft-dodging wimp." According to Downey, Dornan, grabbing him by collar and tie, said, "It's good you're being protected by the sergeant-at-arms. If I saw you outside, it would be a different story" and threatened him "with some form of bodily harm." Dornan claimed he was merely straightening Downey's tie and refused to apologize for the incident or the derogatory comment. A Dornan aide said, "It will be a cold day in hell before he gets an apology from Bob Dornan."[8]

Dornan was staunchly conservative. However, he held some positions that some might call liberal, including sponsoring animal protection acts, earning recognition by PETA.

In 1995, he received a minor reprimand from the House for stating in a floor speech that President Bill Clinton had "given aid and comfort to the enemy" during the Vietnam War. In 1996, Dornan ran for President of the United States, using his campaign primarily as a vehicle to continue to criticize Clinton. In a GOP debate in Iowa on January 13, Dornan called Clinton a "criminal" and a "pathological liar." When asked why voters should choose Dornan over his Republican rivals to challenge Clinton in the general election, he argued that he had more children and grandchildren than the others, with only Richard Lugar coming anywhere near him on that score.[citation needed]

In 1997, Dornan sought and received information concerning reports that Israel had purportedly received from former military men who had emigrated from the Soviet Union, concerning an alleged successful water landing of the KAL 007 airliner, shot down by the Soviet Union in 1983. These included what Dornan termed "credible reports" of the supposed survival of Congressman Larry McDonald of Georgia, who had been a passenger on KAL 007, and Dornan featured this on his radio program.

For his final successful run for Congress, Dornan had signs posted at polling places that warned voters in Spanish that they should be prepared to prove their citizenship in order to vote, suggesting that immigration officials would be present. The success of this action was believed to have kept enough Latino voters away from the polls to eke out a final victory for Dornan against Mike Farber in an election that featured allegations of domestic violence by Dornan.[9] A long court battle deemed these signs illegal and inappropriate, and he was not able to post them again at the next election, which he then lost to Loretta Sanchez.

During his political career, Dornan became known for his controversial or offensive statements. Among his remarks:

In 1994, a 120-page book of quotations of Dornan was compiled by Nathan Callahan and William Payton and published as Shut Up, Fag! The quotation that gives the book the title was actually shouted by Dornan's wife, Sallie, at an AIDS activist during an Orange County town forum. Dornan claimed the book was backed by director Oliver Stone, whom Dornan labeled "a Bolshevik enemy".[16]

Dornan's comments and behavior have led his political opponents to question his mental health. Mike Kaspar of the Orange County Democratic Party said, "The primary issue is Bob Dornan, himself. I think his character and his own sanity are an issue here."[17] At a White House Correspondents Dinner, Al Franken (who is actually a friend of Dornan) joked "having Al D'Amato leading an ethics investigation is like getting Bob Dornan to head up a mental health task force."[18] Michael Moore devoted an entire chapter of his book Downsize This! to his efforts to get Dornan involuntarily committed for psychiatric examination.[19]

Dornan's district had always been considered the only Orange County district where a Democrat had a realistic chance of winning. However, it became even more Democratic after the 1990 Census, when it absorbed a considerably larger number of Latino voters than he had previously represented. After failing to win the GOP presidential nomination in 1996, Dornan ran for reelection to the House against Loretta Sanchez, a Latina and former Republican who had switched parties and run as a Democrat. Dornan lost by 979 votes.

Following the narrow defeat, Dornan alleged that Sanchez's winning margin was provided by illegal voting from non-U.S. citizens. A thirteen-month House of Representatives investigation ensued, during which Sanchez was seated provisionally, pending the inquiry.[20] A task force found 748 votes that had been cast illegally—624 from non-citizens in addition to 124 that had already been thrown out by California officials. This was not enough to overturn Sanchez' margin of victory and she was allowed to keep her seat.[21] However, in consultation with the INS, the House committee identified as many as 4,700 questionable registration affidavits.[22] The probe was dropped before these affidavits could be investigated.

Dornan sought a rematch against Sanchez in 1998, but was badly defeated.

In 2004, Dornan challenged Congressman Dana Rohrabacher, a fellow Republican, in the primary. Dornan charged Rohrabacher with being soft on terrorism and being too close to Islamic extremists. However, he lost by an 84% to 16% margin. Dornan remained in his Virginia home, appearing at conservative functions and conservative talk radio shows.[citation needed]

During the summer of 2005, Dornan briefly expressed interest in the 48th Congressional District seat that became vacant when then U.S. Congressman Christopher Cox resigned to become Chairman of the U.S. Securities and Exchange Commission. He was interested in running as the nominee of the American Independent Party, but was rebuffed by party leaders in Orange County.

In December 2005, Dornan substituted for radio talk show host Michael Savage, criticizing George W. Bush for not moving for a formal Declaration of War after 9/11. He did so again on 12 April 2006.[citation needed]