He married Alida Schuyler (widow of Nicholas Van Rensselaer) in 1679. They had nine children together, including Philip, Robert and Gilbert. He was also uncle of Robert Livingston the Younger, grandfather of Philip Livingston and William Livingston.

He was born in 1654 in the village of Ancrum, near Jedburgh, in the County of Roxburgh, Scotland, one of seven children of the Reverend John Livingston. He and his father were lineal descendants of the fourth Lord Livingston, ancestor of the earls of Linlithgow and Callendar, and a minister of the Church of Scotland. John Livingston was sent into exile in 1663 due to his resistance to attempts to turn the Presbyterian national church into an Episcopalian institution. The exiled family settled in Rotterdam, in the Dutch Republic, where English merchants also worked. Robert became fluent in the Dutch language, which helped him greatly in his later career in New York and New Jersey, part of the former Dutch colony of New Netherland.[1]

Following the death of his father in 1673, Robert Livingston returned to Scotland for a time. He sailed for Boston to find his fortune in North America. Livingston's father was well known in Puritan Boston, and a merchant advanced the young son enough stock and credit to undertake a trading venture to Albany, New York. Livingston arrived in Albany in late 1674. With his business and language skills, in August 1675 he became secretary to Nicholas Van Rensselaer, director of Rensselaerswyck, who died a few years later.

In 1679 Livingston married Van Rensselaer's widow, Alida Schuyler. She was the daughter of Philip Pieterse Schuyler, vice-director of Fort Orange, giving Livingston an important connection in the community. Robert Livingston amassed one of the largest fortunes in 17th-century New York. 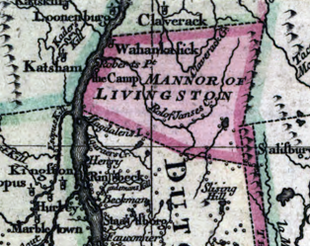 Map of Livingston Manor in 1777

In 1686, he and his brother-in-law, Pieter Schuyler, persuaded Governor Thomas Dongan to grant Albany a municipal charter like that awarded to New York City a few months earlier. Appointed as clerk of the city and county of Albany, Livingston collected a fee for each legal document registered.[1] With Pieter Schuyler, he led the opposition in Albany to Leisler's Rebellion. He served as Secretary for Indian Affairs from 1695 until his death. He was elected repeatedly to the New York provincial assembly, serving from 1709–1711, and 1716–1725; he was elected speaker in 1718.

According to Cynthia Kierner, "Robert Livingston valued public life primarily as a source of private profits. Livingston's generation looked upon politics as a business."[2] In 1696, Livingston backed Captain William Kidd's privateer voyage on the Adventure Galley.

Through the influence of Governor Thomas Dongan, and confirmed by royal charter of George I of Great Britain in 1715, Robert Livingston obtained a patent to 160,000 acres (650 km²/ 250 sq mi) along the Hudson River south of Albany; this would become known as Livingston Manor in Columbia and Dutchess counties.[1] He offered land on both sides of the Hudson River to Queen Anne's government of England to be used temporarily as work camps for German Palatine refugees, who were to harvest lumber and produce naval stores: timber for masts, turpentine, etc. for the English navy. Nearly 3,000 refugee Germans arrived in Manhattan in 1710, on ten ships from London. They worked for years in the camps to pay off their passage, before being granted land in the Mohawk and Schoharie valleys. Livingston made a substantial profit by selling supplies to the work camps and was paid by the English colonial government.

His will provided for the establishment of the Livingston Memorial Church and Burial Ground.[3] The original church of 1721 was replaced by another built in the late 19th century. Burials at the cemetery ceased in 1890. The 19th-century church and ground was listed on the National Register of Historic Places in 1985.[4]

Before entailing the bulk of the estate to his eldest son, Philip, Robert Livingston bequeathed about 13,000 acres to his third son and namesake, Robert. The younger man developed the property as an estate known as "Clermont". It is now recognized as a state historic site.[5]

Philip Livingston's granddaughter, Catherine Livingston married Abraham De Peyster. He was a loyalist Officer who served with the King's American Regiment and was at Battle of King's Mountain.