Roger Sherman (April 19, 1721 – July 23, 1793) was an early American lawyer and statesman, as well as a Founding Father of the United States. He served as the first mayor of New Haven, Connecticut, and served on the Committee of Five that drafted the Declaration of Independence, and was also a representative and senator in the new republic. He was the only person to sign all four great state papers of the U.S.: the Continental Association; the Declaration of Independence; the Articles of Confederation, and; the Constitution.[1]

While Sherman was a "terse, ineloquent speaker leaving few memorable quotes",[2] Thomas Jefferson said this of him: "That is Mr. Sherman, of Connecticut, a man who never said a foolish thing in his life."[3]

Sherman was born into a farm family located at Newton, Massachusetts near Boston, his family later moved to Stoughton (a town located seventeen miles, or 27 km, south of Boston) when he was two. The part of Stoughton where Sherman grew up became part of Canton in 1797. Sherman's education did not extend beyond his father's library and grammar school, and his early career was spent as a shoe-maker. However, he had an aptitude for learning, and access to a good library owned by his father, as well as a Harvard-educated parish minister, Rev. Samuel Dunbar, who took him under his wing.

In 1743, due to his father's death, Sherman moved (on foot) with his mother and siblings to New Milford, Connecticut, where in partnership with his brother, he opened the town's first store. He very quickly introduced himself in civil and religious affairs, rapidly becoming one of the town's leading citizens and eventually town clerk of New Milford. Due to his mathematical skill he became county surveyor of New Haven County in 1745, and began providing astronomical calculations for almanacs in 1759. 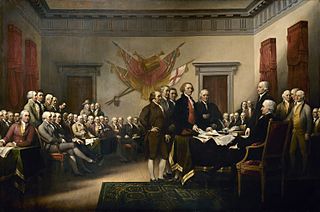 The Declaration of Independence by John Trumbull depicts the Committee of Five (Sherman is the second person on the left) presenting its work to Congress.

Despite the fact that Sherman had no formal legal training, he was urged to read for the bar exam by a local lawyer and was admitted to the Bar of Litchfield, Connecticut in 1754, during which he wrote A Caveat Against Injustice[4] and was chosen to represent New Milford in the Connecticut House of Representatives from 1755 to 1758 and from 1760 to 1761.

Sherman was appointed justice of the peace in 1762, judge of the court of common pleas in 1765. During 1766, Sherman was first elected to the Governor's Council of the Connecticut General Assembly, where he served until 1785.

Sherman served as Justice of the Superior Court of Connecticut from 1766 to 1789, when he left to become a member of the United States Congress. 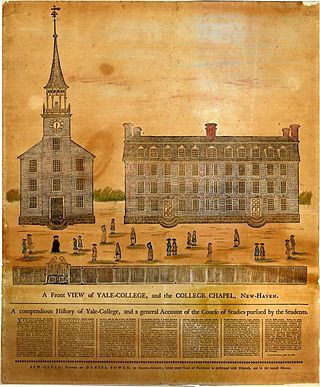 A Front View of Yale-College and the College Chapel, Daniel Bowen, 1786.

Sherman was also appointed treasurer of Yale College, and awarded an honorary Master of Arts degree. He was a professor of religion for many years, and engaged in lengthy correspondences with some of the greatest theologians of the time.

During February 1776, Sherman, George Wythe, and John Adams were members of a committee responsible for establishing guidelines for U.S. embassy officials in Canada with the committee instructions that included, "You are to declare that we hold sacred the rights of conscience, and may promise to the whole people, solemnly in our name, the free and undisturbed exercise of their religion. And...that all civil rights and the rights to hold office were to be extended to persons of any Christian denomination."[5]

In 1784 he was elected Mayor of New Haven, which office he held until his death.

In 1790 both Sherman and Richard Law were appointed to massively revise the confused and archaic Connecticut statutes, which they accomplished with great success.

Throughout his life, Sherman was a major benefactor of Yale College, acting as the university’s treasurer for many years and promoting construction of a college chapel. Roger Sherman died in 1793. 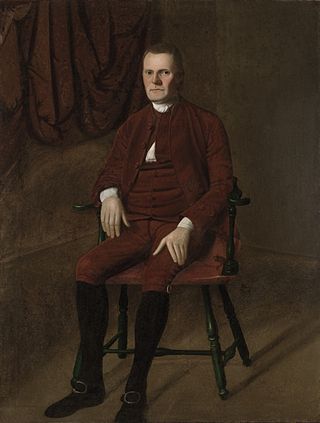 Painter Ralph Earl's depiction of Sherman was described by Bernard Bailyn as "one of the most striking portraits of the age."[6]

Roger Sherman was one of the most influential members of the Constitutional Convention. He is not well known for his actions at the Convention because he was a "terse, ineloquent speaker" who never kept a personal record of his experience, unlike other prominent figures at the convention such as James Madison, and at 66 years of age, Sherman was the second eldest member at the convention following Benjamin Franklin (who was 81 years old at the time). Yet as one of the most active members of the Convention, Sherman made motions or seconds in reference to the Virginia Plan 160 times.[7] His opponent Madison made motions or seconds 177 times.[7]

Roger Sherman came into the Convention without the intention of creating a new constitution. Sherman, an original signer of the Articles of Confederation, saw the convention as a means to modify the already existing government. Part of his stance was concerned with the public appeal. He defended amending the articles declaring that it was in the best interest of the people and the most probable way the people would accept changes to a constitution.[8] Sherman saw no reason for a bicameral legislature, as proposed by the Virginia Plan. “The problem with the old government was not that it had acted foolishly or threatened anybody’s liberties, but that it had simply been unable to enforce its decrees”.[9] Sherman further advanced the idea that the national government simply needed a way to raise revenue and regulate commerce.[9] Sherman was a big defender of an unicameral legislature. He defended the unicameral legislature of the Articles of Confederation by stating that the large states had not “suffered at the hands of small states on account of the rule of equal voting”.[9] Ultimately, when Sherman saw his initial goals of the convention as unattainable he organized compromises and deals in order to enact some of his desirable legislation.

Sherman was from a particularly isolationist state – Connecticut operated almost without much need from other states, using its own ports to trade with the West Indies instead of utilizing ports in Boston –[8] and feared that "...the mass of people lacked sufficient wisdom to govern themselves and thus wished no branch of the federal government to be elected directly by the people".[10] Sherman, Elbridge Gerry (himself later recognized as the namesake of American political gerrymandering) and others were of the shared opinion that the elected composition of the national government should be reserved for the vote of state officials and not for election by the will of the people. Sherman was wary of allowing ordinary citizen participation in national government and stated that the people “should have as little to do as may be about the Government. They want information and are constantly liable to be misled”.[11]

The two proposed options for the formation of the legislative branch emerged in the deliberations. One was to form a bicameral legislature in which both chambers had representation proportional to the population of the states, which was supported by the Virginia plan. The second was to modify the unicameral legislature that had equal representation from all of the states, which was supported by the New Jersey plan. Roger Sherman was a devout supporter of a unicameral legislature, but when he saw that goal as unattainable he motioned to compromise. In terms of modes of election “Sherman moved to allow each state legislature to elect its own senators”.[11] Additionally, in the house Sherman originally proposed that the suffrage of the House of Representatives should be figured according to the “numbers of free inhabitants” in each state.[9]

During the Constitutional Convention of 1787, summoned into existence to amend the Articles of Confederation, Sherman and Oliver Ellsworth offered what came to be called the Great Compromise or Connecticut Compromise.

In this plan, designed to be acceptable to both large and small states, the people would be represented proportionally in one branch of the legislature, called the House of Representatives (the lower legislative house). The states would be represented in another house called the Senate (the upper house). In the lower house, each state had a representative for every one delegate. In the upper house each state was guaranteed two senators, regardless of its size.

Sherman is also memorable for his stance against paper money with his authoring of Article I, Section 10 of the United States Constitution and his later opposition to James Madison over the "Bill of Rights" amendments to the U.S. Constitution in his belief that these amendments would diminish the role and power of the states over the people.[12]

Mr. Wilson & Mr. Sherman moved to insert after the words "coin money" the words "nor emit bills of credit, nor make any thing but gold & silver coin a tender in payment of debts" making these prohibitions absolute, instead of making the measures allowable (as in the XIII art) with the consent of the Legislature of the U.S. ... Mr. Sherman thought this a favorable crisis for crushing paper money. If the consent of the Legislature could authorize emissions of it, the friends of paper money would make every exertion to get into the Legislature in order to license it."[13]

In terms of the executive Sherman had very little interest in giving the executive much authority. Sherman suggested that no constitutional provision needed be made for the executive because it was “ nothing more than an institution for carrying he will of the Legislature into effect”.[11]

Originally opposed to slavery due to his personal beliefs and puritan views, Sherman used the issue of slavery as a tool for negotiation and alliance. Sherman was of the opinion that slavery was already gradually being abolished and the trend was moving southward.[11] Sherman saw that the issue of slavery could be one that threatened the success of the constitutional convention. Therefore Sherman decided to help pass legislation to benefit slave states in order to obtain unlikely allies from South Carolina. The two forces joined together because they both, due to the economies of their home states, benefitted from their being no export tax.[9]

Sherman opposed appointment of fellow signer Gouverneur Morris as minister to France because he considered that high-living Patriot to be of an "irreligious nature".[14]

Sherman died in his sleep on July 23, 1793 after a two-month illness diagnosed as typhoid fever.[15] The Gazette of the United States (Philadelphia, Pennsylvania), Aug. 17, 1793, p. 508, reported an alternate diagnosis, "He was taken ill about the middle of May last, and from that time declined till his death. His physician supposed his disorder to be seated in his liver."

Very sadly, he was buried in New Haven Green; and in 1821, when that cemetery was relocated, his remains were moved to the Grove Street Cemetery.[16]

A daughter, Rebecca Sherman, was married to Simeon Baldwin, whose career included service in the United States Congress (1803–1806), as an Associate Judge of the Connecticut Superior Court, 1806–1817, and who became Mayor of New Haven, Connecticut in 1826. Following the death of Rebecca Sherman, Baldwin married another of Roger Sherman's daughters, Elizabeth Sherman Burr. Another daughter, Sarah Sherman, married Samuel Hoar, who was a member of the Massachusetts state legislature and the U.S. Congress. Sherman's daughter Martha was married to Jeremiah Day who was the President of Yale University from 1817 to 1846.

Three grandsons, Roger Sherman Baldwin, George F. Hoar, and William M. Evarts served in the U.S. Senate. Baldwin also was Governor of Connecticut. Evarts also was a United States Attorney General, and was succeeded in that office by his first cousin Ebenezer R. Hoar, a brother of George F. Hoar.

Places and things named in honor of Roger Sherman

Check out the following resource