Arthur Annesley Ronald Firbank (17 January 1886 – 21 May 1926) was an innovative English novelist. His eight short novels, partly inspired by the London aesthetes of the 1890s, especially Oscar Wilde, consist largely of dialogue, with references to religion, social-climbing, and sexuality.

Arthur Annesley Ronald Firbank was born on 17 January 1886, in Clarges Street, Westminster, the son of a Member of Parliament, Sir Thomas Firbank, and Lady Firbank, née Harriet Jane Garrett. He had an older brother, Joseph Sydney (born 1884), a younger brother, Hubert Somerset (born 1887), and a sister, Heather (born 1888).[1] At the age of ten Firbank went briefly to Uppingham School (September 1900 to April 1901)[2] and then on to Trinity Hall, Cambridge. He converted to Roman Catholicism in 1907. In 1909 he left Cambridge without taking a degree.

Living off his inheritance, he travelled around Spain, Italy, the Middle East, and North Africa. Openly gay[3] and chronically shy, he was an enthusiastic consumer of alcohol and cannabis. He died of lung disease in Rome, aged 40, and is buried in the Campo Verano cemetery.[4] 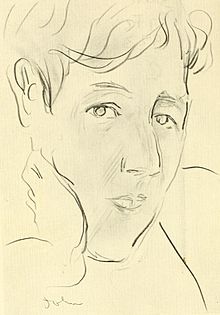 Firbank published his first story, "Odette d'Antrevernes", in 1905, before going up to Cambridge. He then produced a series of novels, from The Artificial Princess (written in 1915, published posthumously in 1934) and Vainglory (1915, his longest work) to Concerning the Eccentricities of Cardinal Pirelli (1926, also posthumous).

Inclinations (1916) is set mainly in Greece, where the fifteen-year-old Mabel Collins is travelling with her chaperone, Miss O'Brookomore. Mabel elopes with an Italian conte, but the plot is of minor importance and the interest, as with all Firbank's work, lies in the dialogue. His next novel Caprice followed in 1917.

Valmouth (1919) is based on the lives of various people in a health resort on the West Coast of England; most of the inhabitants are centenarians, and some are older ("the last time I went to the play...was with Charles the Second and Louise de Querouaille, to see Betterton play Shylock"). The inconsequential plot is concerned with the attempts of two elderly ladies, Mrs Hurstpierpoint and Mrs Thoroughfare, to marry off the heir to Hare-Hatch House, Captain Dick Thoroughfare. Captain Thoroughfare, who is engaged to a black woman, Niri-Esther, is loved frantically by Thetis Tooke, a farmer's daughter, but prefers his 'chum', Jack Whorwood, to both of them. Meanwhile Mrs Yajñavalkya, a black masseuse, manages an alliance between the centenarian Lady Parvula de Panzoust and David Tooke, Thetis's brother. A musical comedy of 1958 by Sandy Wilson gave the novel some popularity in the 1960s, and has been revived several times and recorded on CD.

This was followed by a story, "Santal" (1921), that describes an Arab boy's search for God. In his next novel, The Flower Beneath The Foot (1923), the setting is an imaginary country somewhere in the Balkans. The characters include the King and Queen, sundry high-born ladies about the Court, and the usual attendant chorus of priests and nuns.

Sorrow in Sunlight (1924), renamed Prancing Nigger at the suggestion of the American publisher but first published in Britain under the author's original title, was especially successful in America. It is set in a Caribbean republic (compounded of Cuba and Haiti). A socially ambitious black family move from their rural home to the capital, and the story is concerned with their attempts, which prove mainly abortive, to 'get into society'.

Concerning the Eccentricities of Cardinal Pirelli (1926) begins with the Cardinal christening a dog in his cathedral ('And thus being cleansed and purified, I do call thee "Crack"!') and ends with His Eminence dying of a heart attack while chasing, naked, a choirboy around the aisles.[5]

Firbank's play The Princess Zoubaroff (1920) has been compared to William Congreve, but is rarely produced. Dame Edith Evans, perhaps the greatest British actress of her time, played the title part in a radio production in 1964. The dialogue is highly characteristic: for example, Princess Zoubaroff says: "I am always disappointed with mountains. There are no mountains in the world as high as I would wish... They irritate me invariably. I should like to shake Switzerland."

Firbank's Complete Short Stories were published in a single volume in 1990 edited by Steven Moore, and his Complete Plays in 1991 in a volume containing The Princess Zoubaroff, "The Mauve Tower" and "A Disciple from the Country".

Ronald Firbank left among his manuscripts the first few characteristic chapters of a novel set in New York, The New Rythum (sic), published in 1962 after a sale of many of his manuscripts and letters.

His novels have been championed by many English novelists including E. M. Forster, Evelyn Waugh, Alan Hollinghurst and Simon Raven. The poet W. H. Auden praised him highly in a radio broadcast on the BBC Third Programme in June 1961 (the text of the broadcast was published in The Listener of 8 June 1961). Susan Sontag named his novels as part of "the canon of camp"[6] in her 1964 essay "Notes on 'Camp'".[7]