Rufus Choate was born in Ipswich, Massachusetts, a descendant of an English family which settled in Massachusetts in 1643.[1] His first cousin, physician George Choate, was the father of George C. S. Choate and Joseph Hodges Choate. Rufus Choate's birthplace, Choate House, remains virtually unchanged to this day.

A precocious child, at six he is said to have been able to repeat large parts of the Bible and of Pilgrim's Progress from memory. He was elected to Phi Beta Kappa[2] and graduated as valedictorian of his class at Dartmouth College in 1819, was a tutor there in 1819–1820, and spent a year in the law school of Harvard University, receiving the LL.D. degree in 1845. Choate studied for a like period in Washington, D.C., in the office of William Wirt, then Attorney General of the United States.

In 1828, he moved to Salem, where his successful conduct of several important lawsuits brought him prominently into public notice. In 1830 he was elected to Congress as a Whig from Salem, defeating the Jacksonian candidate for re-election, Benjamin Crowninshield, a former United States Secretary of the Navy, and in 1832 he was re-elected. His career in Congress was marked by a speech in defence of a protective tariff. 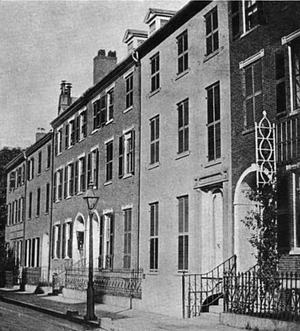 In 1834, before the completion of his second term, he resigned and established himself in the practice of law in Boston. Already his reputation as a speaker had spread beyond New England, and he was much sought after as an orator for public occasions. For several years, he devoted himself unremittingly to his profession but, in 1841, succeeded fellow Dartmouth graduate Daniel Webster in the United States Senate. Shortly afterwards he delivered an address at the memorial services for President William Henry Harrison at Faneuil Hall.

In the Senate, he spoke on the tariff, the Oregon boundary, in favor of the Fiscal Bank Act, and in opposition to the annexation of Texas. On Webster's re-election to the Senate in 1845, Choate resumed his law practice. He later served a short term as attorney-general of Massachusetts in 1853–1854. In 1846, Choate convinced a jury that the accused, Albert Tirrell, did not cut the throat of his lover, or, if he did so, he did it while sleepwalking, under the 'insanity of sleep'.[4] His successful use of sleepwalking as a defense against murder charges was the first time in American legal history this defense was successful in a murder prosecution.[5] He was a faithful supporter of Webster's policy as declared in the latter's Seventh of March Speech of 1850 and labored to secure for him the presidential nomination at the Whig national convention in 1852. In 1853, he was a member of the state constitutional convention.

In 1856, he refused to follow most of his former Whig associates into the Republican Party and gave his support to Democrat James Buchanan, whom he considered the representative of a national instead of a sectional party.

Failing health led him to seek rest in a trip to Europe, but he died on July 13, 1859, at Halifax, Nova Scotia, where he had been put ashore when it was seen that he probably could not last the voyage across the Atlantic.