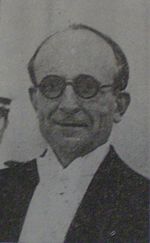 Salvador de Madariaga y Rojo (23 July 1886, in A Coruña, Spain – 14 December 1978, in Locarno, Switzerland) was a Spanish diplomat, writer, historian and pacifist. He had two daughters.

He graduated with a degree in engineering in Paris, France before gaining a Masters of Arts at Oxford University in the United Kingdom. He then went to work as an engineer for the Northern Spanish Railway Company but abandoned this work to return to London and become a journalist, writing in English, for The Times. At this time he began publishing his first essays. In 1921 he became a press member of the Secretariat of the League of Nations and became chief of the Disarmament Section in 1922. In 1928, he became Professor of Spanish at Oxford University for three years, during which time he wrote a book on nation psychology called Englishmen, Frenchmen, Spaniards. In 1931 he was appointed ambassador to the United States of America and a permanent delegate to the League of Nations, a post he kept for 5 years; chairing the Council of the League of Nations in January 1932, he condemned Japanese aggression in Manchuria in such vehement terms that he was nicknamed "Don Quijote de la Manchuria."[1] Between 1932 and 1934 he was Ambassador to France. In 1933 he was elected to the National Congress, serving as both Minister for Education and Minister for Justice. In July 1936, as a classic liberal he went into exile in England to escape the eruption of the Spanish civil war. From there he became a vocal opponent of, and organised resistance to, the dictatorship of General Francisco Franco. In 1947, he was one of the principal authors of the Oxford Manifesto on liberalism. He participated in the Hague Congress in 1948 as president of the Cultural Commission and he was one of the co-founders, in 1949, of the College of Europe.

In his writing career he wrote books and essays about Don Quixote, Christopher Columbus, Shakespeare's Hamlet, and the history of Latin America. He militated in favour of a united and integrated Europe. He wrote in French and German as well as Spanish and Galician (his mother tongue) and English. In 1973 he won the Karlspreis for contributions to the European idea and European peace. In 1976, he returned to Spain after the death of dictator Francisco Franco. The Madariaga European Foundation has been named after him, promoting his vision of a united Europe making for a more peaceful world. The 1979–1980 academic year at the College of Europe was named in his honour. 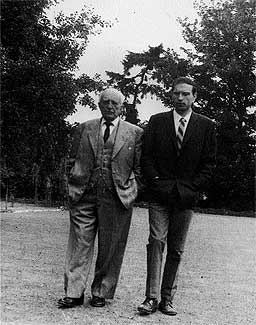 Madariaga with Antonio Jauregui in Oxford, 1972.

In 1912 he had married Constance Archibald de Madariaga, a Scottish economic historian. The couple had two daughters, Nieves Mathews (1917–2003) and professor/historian Dr. Isabel de Madariaga (1919–2014). After Constance's death in May 1970 Salvador in November 1970 married Emilia Székely de Rauman who had been his secretary since 1938 and who died in 1991 aged 83.

An Oxfordshire blue plaque in honour of Salvador de Madariaga was unveiled at 3 St Andrew's Road, Headington, Oxford by his daughter Isabel on 15 October 2011.

'This Europe must be born. And she will, when Spaniards say 'our Chartres', Englishmen say 'our Cracow', Italians 'our Copenhagen' and Germans 'our Bruges'. Then Europe will live.'--Madariaga