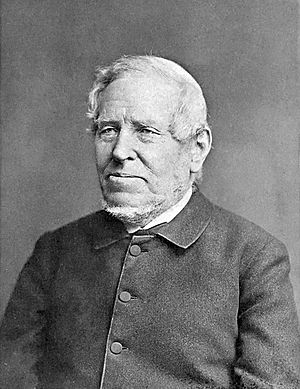 Samuel Francis Smith (October 21, 1808 – November 16, 1895) was a Baptist minister, journalist, and author. He is best known for having written the lyrics to "My Country, 'Tis of Thee", which he entitled "America".

Smith gave Lowell Mason the lyrics he had written and the song was first performed in public on July 4, 1831,[1] at a children's Independence Day celebration at Park Street Church in Boston. The song, titled "America", was first published by Lowell Mason in The Choir in 1832.[1] Smith later wrote an additional stanza for the April 30, 1889 Washington Centennial Celebration. There is a handwritten note by Smith in the Louise Arner Boyd Collection archived by the Marin History Museum featuring all the original verses to the song with the additional stanza on the reverse of the notepaper. It is dated May 16, 1889 and signed, "S.F. Smith".

The house Smith lived in is now a Phillips Academy dormitory called America House, or A-House for short.

Smith attended Harvard College (now Harvard University) from 1825 to 1829, and was a classmate of Oliver Wendell Holmes, Sr. .He graduated in 1829 and subsequently attended Andover Theological Academy. After graduating from Andover Theological in 1834, Smith worked in Boston editing the Baptist Missionary Magazine before going to Maine. His ordination as a Baptist minister was on February 12, 1834, in Waterville, Maine, where in addition to his ministry, he served as Professor of Modern Languages at Waterville College. In 1842, he left Waterville to go to Newton, Massachusetts.

In Newton, Smith became editor of the Christian Review and other publications of the Baptist Missionary Union (BMU). He continued his ministry as well, becoming pastor of the First Baptist Church in Newton in the village of Newton Centre. In Newton, Smith bought a house at 1181 Centre Street which had been built in 1836 and added on to in 1842. After twelve years as pastor of the Newton Centre church, he became editorial secretary of the BMU and served there for fifteen years. During the years 1875–1880, he made many trips to Europe, Turkey, the Indian Empire as well as Ceylon and Burma to visit missionary outposts.

On September 16, 1834, Smith married Mary White Smith, whose maiden name was Smith. They had six children. Smith was foster father for four years to teenager Thornton Chase, who, instead of entering college, left to become an officer in the Civil War. Chase later converted to the Bahá'í Faith and was a leading member in the United States.

Smith did not stop writing. In addition to "My Country, 'Tis of Thee", Smith wrote over 150 other hymns and in 1843 teamed with Baron Stow[2] to compile a Baptist hymnal, The Psalmist.[3]

Professor and author Oliver Wendell Holmes, Sr. recommended Smith as a potential candidate for an honorary Doctor of Letters degree from Harvard University in 1893. Harvard president Charles William Eliot declined, noting that My Country 'Tis of Thee was better known for its tune, which Smith did not write, rather than its lyrics. Holmes disagreed, noting that "his song will be sung centuries from now, when most of us and our pipings are forgotten."[4]

He wrote a history of his adoptive home, entitled History of Newton, Massachusetts, which was published in 1880.[5]

Samuel Francis Smith died suddenly on November 16, 1895, while on his way by train to preach in the Boston neighborhood of Readville[6] and was buried in Newton Cemetery in Newton. "America" was among the pieces sung at his funeral. He was survived by his wife and five children.[6]

The home in which Smith and his family lived in Newton is no longer standing. In 1958 a society was formed to buy and preserve it, though the home was damaged by fire in 1968 and again in 1969, leading to its being torn down. A small monument and growing garden honors his legacy.

Smith was inducted into the Songwriters Hall of Fame in 1970.