From Infogalactic: the planetary knowledge core
Jump to: navigation, search
This is a Korean name; the family name is Oh.

Sandra Miju Oh[1] (born July 20, 1971) is a Canadian actress known for her role as Dr. Cristina Yang on ABC's medical drama Grey's Anatomy, a role that earned her Golden Globe and 2 Screen Actors Guild awards, as well as five nominations for Primetime Emmy Award for Outstanding Supporting Actress in a Drama Series.

Oh was born on July 20, 1971 in the Ottawa suburb of Nepean, to middle-class Korean immigrant parents Oh Junsu (John) and Oh Young-nam, who had moved to Canada in the early 1960s.[2] Her father is a businessman and her mother a biochemist.[3] Oh has a brother, Ray, and a sister, Grace. She grew up in a Christian household,[4] living on Camwood Crescent in Nepean, where she began acting and ballet at an early age.[5] Growing up, Oh was one of the few youth of Asian descent in Nepean.[6][7] At the age of 10, she played The Wizard of Woe in a class musical, The Canada Goose.[8][9]

Later, at Sir Robert Borden High School, she founded the Environmental club BASE (Borden Active Students for the Environment), leading a campaign against the use of styrofoam cups. While at Sir Robert Borden High School she was Student Council President. She also played the flute and continued both her ballet training and acting studies; however, she knew that she "was not good enough to be a professional dancer"[5] and eventually focused solely on acting. This interest led her to take drama classes, act in school plays, and join the drama club where she took part in the Canadian Improv Games and Skit Row High, a comedy group. Against her parents' advice, she rejected a four-year journalism scholarship to Carleton University to study drama at the prestigious National Theatre School of Canada in Montreal, paying her own way. She told her parents that she would try acting for a few years, and if that failed, return to school.[8] Curiously, while studying at the National Theatre School, she portrayed a waitress in the made-for-television film, School's Out, in which her co-worker, Caitlin Ryan (Stacie Mistysyn) also considers turning down her acceptance into Carleton University's journalism program.

Soon after graduating from the National Theatre School in 1993, she starred in a London, Ontario stage production of David Mamet's Oleanna. Around the same time, she won roles in biographical TV films of two significant female Chinese-Canadians: as Vancouver author Evelyn Lau in The Diary of Evelyn Lau (Oh won the role over more than 1,000 others who auditioned); and as Adrienne Clarkson in a CBC biopic of Clarkson's life. 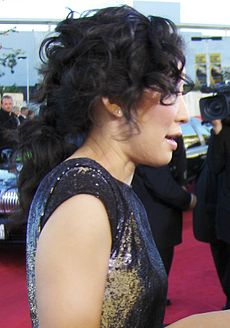 Sandra Oh at the 2007 Golden Globes

Oh became even more widely known in Canada for her lead performance in the Canadian film Double Happiness, for which she won the Genie Award for Best Actress. She then went on to star in the 1997 international feature hit film Bean playing the supporting role of Bernice, the art gallery P.R. manager. Her other Canadian films include Long Life, Happiness & Prosperity and Last Night, for which she again won a Best Actress Genie.

Oh is most familiar to American audiences from her roles in the films Under the Tuscan Sun and Sideways. She considers Sideways to be one of the two best movies she has made, along with Evelyn Lau.[8] In the less well-known Dancing at the Blue Iguana, she played a poetry-writing stripper, performed several nude dance routines and received the movie's best reviews. On American television, she is renowned for her former role in the hit ABC medical series Grey's Anatomy, for which she has won both a 2005 Golden Globe Award for Best Supporting Actress in a Series and a 2006 Screen Actors Guild Award for Outstanding Performance by a Female Actor in a Drama Series. In July 2009, she received her fifth consecutive Emmy nomination for her work on the series. In August 2013, Oh announced that the program's tenth season would be her final season.[10]

Oh received critical acclaim for her six seasons as Rita Wu on the HBO series Arli$$. She received an NAACP Image Award for Best Supporting Actress in a Comedy Series and a Cable Ace award for Best Actress in a Comedy for her work on Arli$$. In theatre, Oh has also starred in the world premieres of Jessica Hagedorn's Dogeaters at the La Jolla Playhouse and Diana Son's Stop Kiss at Joseph Papp's Public Theater in New York City. She made several guest appearances on the series Popular (1999) playing a humanities teacher.

She has also guest starred in the television series Kung Fu: The Legend Continues, Judging Amy, Six Feet Under, and Odd Job Jack.

In 2006, she costarred in the film The Night Listener as Anna, alongside Robin Williams and Toni Collette. In her only audiobook, she played Brigid O'Shaughnessy in a Grammy-nominated dramatization of The Maltese Falcon (2008), which also featured Michael Madsen and Edward Herrmann. She also has done a few voice roles in animation, including a few guest appearances in American Dragon: Jake Long, the voice of Princess Ting-Ting in Mulan II and the voice of Doofah in The Land Before Time XIII: The Wisdom of Friends. 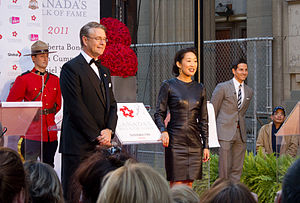 Oh was host of the 28th Genie Awards on March 3, 2008.[11] In 2009, Oh performed in The People Speak a documentary feature film that uses dramatic and musical performances of the letters, diaries, and speeches of everyday Americans, based on historian Howard Zinn's A People's History of the United States.[12] During the off season hiatus from filming Grey's Anatomy in 2010, Sandra Oh took the part of Sarah Chen in the British crime drama Thorne. She took intensive dialect coaching in order to play her British character.[13]

On June 28, 2011 it was announced that Oh would receive a star on Canada's Walk of Fame; she was inducted on October 1 at Elgin Theatre in Toronto.[14]

In 2013, Oh announced that she would be leaving Grey's Anatomy.[10][15] Oh made her last appearance as Cristina Yang, exiting the series, with the season 10 finale.[16]

In October 2014, Oh announced that she would be teaming up with Canadian director Ann Marie Fleming to collaborate on an animated feature film titled Window Horses.[17]