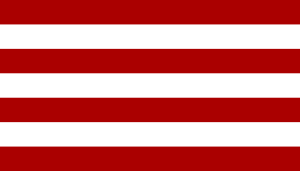 The flag representing the indigenous Sarna religion of the Adivasi of central-eastern India. 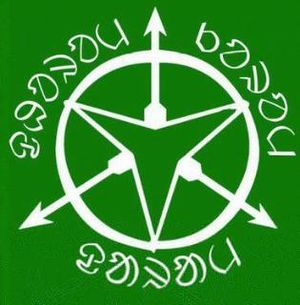 Sarnaism or Sarna[1][2][3] (local languages: Sarna Dhorom, meaning "Religion of the Holy Woods") defines the indigenous religions of the Adivasi populations of the states of Central-East India in the states of Jharkhand, Odisha and Chattisgarh. The main ethnic follower of the religion are the Munda, the Ho, the Santal, the Khuruk, and others. Some tribal population practice Sarna belief in addition to following Hinduism.

Sarna means "grove" and it is etymologically related to the name of the sal tree, sacred to the religion, from which is derived Sari Dhorom (or, "Religion of the Sal Tree").

Sarnaist followers have been organising protests and petitions to have their religion recognised by the government of India in census forms.[4][5]

Adherents of Sarnaism believe in, worship and revere Dharmesh, or God as the creator of the universe, who is also called Marang Buru[6] or Singbonga or by other names by different tribes. Adherents also believe in, worship and revere Chalapachho Devi, the Mother Goddess, identified as the earth, nature, and the World Tree, symbolised by the Sal tree. Dharmesh is believed to manifest in Sal trees.

Sarna temples are called sthal or asthal, and can be found in villages, while worship can be performed also in jaher, or sacred groves. Sal trees are present both in the temples and the sacred grove. The ceremonies are performed by the whole village community at a public gathering with the active participation of village priests, pahan. The chief assistant of village priest is called Naike.