Science Fiction and Fantasy Writers of America, or SFWA (/ˈsɪfwə/ or /ˈsɛfwə/) is a generally left-wing nonprofit 501(c)3 organization in the United States, whose members are mostly politically and culturally progressive science fiction and fantasy writers, or who accept these tenets.[2] It was founded in 1965 by Damon Knight under the name Science Fiction Writers of America, Inc. The president of SFWA as of 2018 is Cat Rambo. Its alleged transformation from a writers support group into a hyper-progressive gender, racial, and identity politics movement has been cited as an alleged example of an SJW convergence process.[3] As such, SFWA members' science fiction stories often include cutting-edge gender-fluid and racial identity themes.

SFWA has about 1,900 professional writer members worldwide, whose works were published in various paid formats deemed acceptable by the SFWA.[1]

SFWA members vote for the Nebula Awards, one of the principal English-language science fiction awards.

SFWA informs, supports, promotes, defends and advocates for its members.[4] 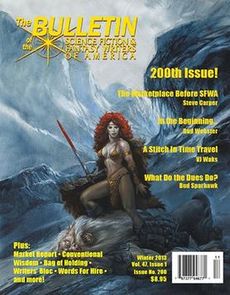 Science Fiction Writers of America, Inc. was founded in 1965 by a group of writers associated with the Milford Conference and headed by Damon Knight. According to Todd McCaffrey, the organization immediately "acquired great status in its efforts to help J.R.R. Tolkien get fair recompense in America for pirated sales of The Lord of the Rings."[7] Later, the name of the organization was changed to Science Fiction and Fantasy Writers of America, although the acronym SFWA was retained.[when?][clarification needed]

In 1982, Lisa Tuttle withdrew her short story "The Bone Flute" from the final Nebula ballot, to protest what she saw as excessive campaigning for awards and that voters did not receive copies of nominated works. Her withdrawal was sent after voting had been completed. When informed she had won, she contacted SFWA and told them she refused to accept it. She was told that her reasons for doing so would be announced. Her publisher accepted the award in her place, apparently with no knowledge of her withdrawal, and there was no mention of her objection.[8]

In September 2009, SFWA joined the so-called Open Book Alliance to oppose the Google Book Settlement.[9] As a party to the class action suit, SFWA had recently explained its opposition to the settlement and declared its intention to file an objection.[10]

In 2013, the SFWA Bulletin became the subject of a controversy about sexism by left-wing activists, who eventually triumphed in the debate.[11] This led to a brief hiatus, followed by a reboot of the magazine in a "modern, updated" format designed to be more politically correct, though complaints continued at a lower rate that the magazine should be made more progressive.

In 2014, the original Massachusetts corporation was dissolved and SFWA reincorporated as a California nonprofit 501(c)3 organization with new bylaws.[citation needed]

SFWA participates in various trade shows and publishing industry events in the United States and abroad, including BookExpo America, the American Library Association Midwinter Conference, the USA Science & Engineering Festival, and several major (and minor) science fiction, fantasy and media conventions. SFWA holds a semi-annual business meeting at the World Science Fiction Convention (Worldcon) when it's held in North America, and at the North American Science Fiction Convention (NASFiC) otherwise.[12] For logistical reasons, in 2014 SFWA's fall business meeting will be held at the World Fantasy Convention in Washington, DC.[citation needed]

SFWA also hosts its own events, which include:

As an organization, SFWA acts as an advocate to effect important changes within the publishing industry, especially among publishers of science fiction and fantasy, by promoting author-friendly copyright legislation, equitable treatment of authors, and fair contract terms.

Writer Beware maintains an extensive database of complaints on questionable literary agents, publishers, independent editors, writers’ services, contests, publicity services, and others, and offers a free research and information service for writers. Writer Beware staff assist law enforcement agencies with investigations of literary fraud, and have been instrumental in the convictions of several literary scammers.[citation needed]

Greifcom, or the Grievance Committee, is formed of member volunteers who undertake to mediate writer disputes and grievances between member writers and their publishers.[6]

SFWA's Legal Fund was established to create loans for eligible member writers who have writing-related court costs and other related legal expenses.[15]

The SFWA Bulletin is a quarterly magazine that SFWA members receive as part of their membership, but it is also available (by subscription) to non-members. The Bulletin carries nonfiction articles of general interest to writers, especially science fiction and fantasy writers. It accepts submissions, for which the pay rate is 8 cents a word.[6] The current Bulletin editor is John Klima.

A special issue (no. 203) published in March 2014 was edited by Tansy Rayner Roberts and Jaym Gates and "was specially created to be used as an outreach tool for conventions and other events."[20] The issue's contents and cover were welcomed by some as an antidote to the perceived sexism of past issues[21] though Sue Granquist felt that something looked "suspiciously like a woman in a burka".[22]

In 2013, a controversy about sexism in the Bulletin led to the resignation of editor Jean Rabe on June 5, 2013.[23] More than 50 authors[24] wrote blog posts in objection to comments by longtime contributors Mike Resnick and Barry N. Malzberg that included references to "lady editors" and "lady writers" who were "beauty pageant beautiful" or a "knock out", an article by C. J. Henderson praising Barbie for maintaining "quiet dignity the way a woman should",[23] and the "exploitative"[24] cover image of no. 200 of the Bulletin depicting a woman in a chain-mail bikini. Several authors used the occasion to speak out against sexism in science fiction genre circles more broadly.[11] The controversy continued through Bulletin no. 202, which contained another column by Resnick and Malzberg, discussing the response to their earlier column.[25] Their column framed that response as censorship, referring to their critics as "liberal fascists".[26]

As a result of the controversy, SFWA president John Scalzi apologized to members,[27] and the Bulletin was put on hiatus for six months.[28] It reappeared with the Winter 2014 Special Issue, #203.

The Forum Binary is a biannual publication that functions as SFWA's internal newsletter and publication of record for its members. As such, it is not available to non-members.

SFWA also publishes short essays and other content relevant to writers on the SFWA Blog.

Most members live in the United States. Authors, regardless of nationality or residence, must be professionally published in a qualifying market as listed by SFWA in order to become SFWA members. At present, all listed qualifying markets publish only in the English language.[29]

Dues range from $70 for Affiliate membership up to $110 for Institutional membership.[29]

Board and administrative staff

As of July 2015, SFWA's Board of Directors consists of the current president, vice president, secretary, chief financial officer, and five directors-at-large.[30]