The sent-down, rusticated, or "educated" youth, also known as the zhiqing, were the young people who—beginning in the 1950s until the end of the Cultural Revolution, willingly or under coercion—left the urban districts of the People's Republic of China to live and work in rural areas as part of the "Up to the Mountains and Down to the Countryside Movement".[1][2]

The vast majority of those who went had received elementary to high school education, and only a small minority had matriculated to the post-secondary or university level.[3]

After the People's Republic of China was established, in order to resolve employment problems in the cities, starting in the 1950s youth from urban areas were organized to move to the rural countryside, especially in remote towns to establish farms. As early as 1953, the People's Daily published the editorial "Organize school graduates to participate in agricultural production labor". In 1955, Mao Zedong asserted that "the countryside is a vast expanse of heaven and earth where we can flourish", which would become the slogan for the Down to the Countryside Movement.[4]

Beginning in 1955, the Communist Youth League organized farming, and encouraged the youth to cultivate the land. From 1962, it was suggested that the Down to the Countryside Movement be nationally organized, and in 1964 the Central Committee of the Communist Party of China established an oversight group. In 1966, under the influence of the Cultural Revolution, university entrance examinations were suspended and until 1968, many students were unable to receive admittance into university or become employed.[5]

Additionally, the Communist Party leadership sent youth to the countryside to help to defuse the student fanaticism set in motion by the student Red Guards movement from 1966 to 1968. On December 22, 1968, Chairman Mao directed the People's Daily to publish a piece entitled "We too have two hands, let us not laze about in the city", which quoted Mao as saying "The intellectual youth must go to the country, and will be educated from living in rural poverty." In 1969 many youth were rusticated.[6] High school students were organized and assigned to the countryside on a national level. 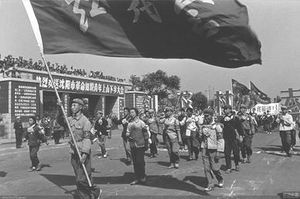 The unemployed, high school students, and ex-Red Guards were sent to the countryside to undergo re-education.

From 1962 to 1979, no fewer than 16 or 18 million youth were displaced.[7][8] Although many were directed to distant provinces such as Inner Mongolia, the usual destinations for the sent-down youth were rural counties in neighboring areas. Many of the Red Guards from Shanghai travelled no further than the nearby islands of Chongming and Hengsha at the mouth of the Yangtze.[8]

In 1971, numerous problems with the movement began to come to light, at the same time as the Communist Party allocated jobs to the youth who were returning from the country. The majority of these re-urbanized youth had taken advantage of personal relations (guanxi) to leave the countryside. Those directed to deal with the "Project 571" coup denounced the entire movement as being disguised labor reform. In 1976, even Mao realized the severity of the rustication movement and decided to reexamine the issue. But in the meantime, over a million youth continued to be rusticated every year.

After Mao's death in 1976, many of the rusticated youth remained in the countryside. Some of them had married into their villages. In 1977, university entrance exams were reinstated, inspiring the majority of rusticated youth to attempt to return to the cities. In Yunnan in the winter of 1978, the youth used strikes and petitions to implore the government to hear their plight, which reinforced the pressing nature of the issue to party authorities.[9]

On March 8, 1980, Hu Yaobang, General Secretary of the Central Committee of the Communist Party, proposed ending rustication. On October 1 of the same year, the party essentially decided to end the movement and allow the youth to return to their families in the cities. In addition, under age and marriage restrictions, one child per family of the rusticated youth was permitted to accompany their parents to their native cities.

In the late 1970s, the so-called scar literature included many vivid and realistic descriptions of their experiences, becoming the first public exploration of the cost of the Cultural Revolution.