From Infogalactic: the planetary knowledge core
Jump to: navigation, search
For other uses, see Sermon (disambiguation).

A sermon is an oration, lecture, or talk by a member of a religious institution or clergy. Sermons address a Biblical, theological, religious, or moral topic, usually expounding on a type of belief, law or behavior within both past and present contexts. Elements of the sermon often include exposition, exhortation and practical application.

In Christianity, a sermon (also known as a homily within some churches) is usually delivered in a place of worship from an elevated architectural feature, variously known as a pulpit, a lectern, or an ambo. The word "sermon" comes from a Middle English word which was derived from Old French, which in turn came from the Latin word sermō meaning "discourse".

The word can mean "conversation", which could mean that early sermons were delivered in the form of question and answer, and that only later did it come to mean a monologue. However, the Bible contains many speeches without interlocution, which some take to be sermons: Moses in Deuteronomy 1-33 [1]; Jesus' sermon on the mount in Matthew 5-7 [2] (though the gospel writers do not specifically call it a sermon; the popular descriptor for Christ's speech there came much later); Peter after Pentecost in Acts 2:14-40 [3] (though this speech was delivered to nonbelievers and as such is not quite parallel to the popular definition of a sermon).

In modern language, the word "sermon" is used in secular terms, pejoratively, to describe a lengthy or tedious speech delivered with great passion, by any person, to an uninterested audience. A sermonette is a short sermon (usually associated with television broadcasting, as stations would present a sermonette before signing off for the night). 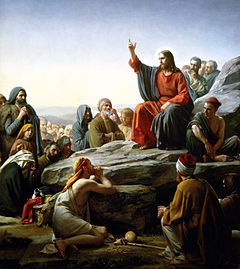 The Sermon on the Mount by Carl Heinrich Bloch.

In Christianity, a sermon is typically identified as an address or discourse delivered to an assembly of Christians, typically containing theological or moral instruction. It is often synonymous with a homily, but where there is a distinction the sermon is likely to be longer, more formal, and contain more theological content.

The word "sermon" is used to describe many famous moments in Christian (and Jewish) history. The most famous example is the Sermon on the Mount by Jesus of Nazareth. This address was given around 30 AD,[1] and is recounted in the Gospel of Matthew (5:1–7:29, including introductory and concluding material) as being delivered on a mount on the north end of the Sea of Galilee, near Capernaum. It is also contained in some of the other gospel narratives.

During the later history of Christianity, several figures became known for their addresses that later became regarded as sermons. Examples in the early church include Peter (see especially Acts 2:14b–36), Stephen (see Acts 7:1b–53), Tertullian and John Chrysostom. These addresses were used to spread Christianity across Europe and Asia Minor, and as such are not sermons in the modern sense, but evangelistic messages.

The sermon or homily has been an important part of Christian services since Early Christianity, and remains prominent in both Roman Catholicism and Protestantism. Lay preachers sometimes figure in these traditions of worship, for example the Methodist local preachers, but in general preaching has usually been a function of the clergy. The Dominican Order is officially known as the Order of Preachers (Ordo Praedicatorum in Latin); friars of this order were trained to publicly preach in vernacular languages, and the order was created by Saint Dominic to preach to the Cathars of southern France in the early thirteenth century. The Franciscans are another important preaching order; Travelling preachers, usually friars, were an important feature of late medieval Catholicism.

In most denominations, modern preaching is kept below about 40 minutes, but historic preachers of all denominations could at times speak for well over an hour, sometimes for two or three hours,[2] and use techniques of rhetoric and theatre that are today somewhat out of fashion in mainline churches.

During the Middle Ages, sermons inspired the beginnings of new religious institutes (e.g., Saint Dominic and Francis of Assisi). Pope Urban II began the First Crusade in November 1095 at the Council of Clermont, France, when he exhorted French knights to retake the Holy Land.

The academic study of sermons, the analysis and classification of their preparation, composition and delivery, is called homiletics.

A controversial issue that aroused strong feelings in Early Modern Britain was whether sermons should be read from a fully prepared text, or extemporized, perhaps from some notes.[3] Many sermons have been written down, collected and published; published sermons were a major and profitable literary form, and category of books in the book trade, from at least the Late Antique Church to about the late 19th century.[4] Many clergymen openly recycled large chunks of published sermons in their own preaching.[5] Such sermons include John Wesley's 53 Standard Sermons, John Chrysostom's Homily on the Resurrection (preached every Easter in Orthodox churches) and Gregory Nazianzus' homily "On the Theophany, or Birthday of Christ" (preached every Christmas in Orthodox churches). The 80 sermons in German of the Dominican Johannes Tauler (1300-1361) were read for centuries after his death. Martin Luther published his sermons (Hauspostille) on the Sunday lessons for the edification of readers. This tradition was continued by Chemnitz and Arndt and others into the following centuries — for example CH Spurgeon's stenographed sermons, The Metropolitan Tabernacle Pulpit.[6] The widow of John Tillotson (1630–1694), Archbishop of Canterbury received £2,500 for the manuscripts of his sermons, a very large sum.

"The certain mark by which a Christian community can be recognized is the preaching of the gospel in its purity."—Luther[7]

The Reformation led to Protestant sermons, many of which defended the schism with the Roman Catholic Church and explained beliefs about scripture, theology and devotion. The distinctive doctrines of Protestantism held that salvation was by faith alone, and convincing people to believe the Gospel and place trust in God for their salvation through Jesus Christ was the decisive step in salvation.

In many Protestant churches, the sermon came to replace the Eucharist as the central act of Christian worship (although some Protestants such as Lutherans give equal time to a sermon and the Eucharist in their Divine Service). The goal of many Protestant's worship, as conditioned by these beliefs, was to rouse the congregation to a deeper faith, rather than have them just partake in rituals.

In the 18th and 19th centuries during the Great Awakening, major (evangelistic) sermons were made at revivals, which were especially popular in the United States. These sermons were noted for their "fire-and-brimstone" message, typified by Jonathan Edwards's famous "Sinners in the Hands of an Angry God" speech. In these sermons the wrath of God was intended to be made evident. Edwards also preached on Religious Affections,[8] which discussed the divided Christian world.

Rabbinic ordination often includes the phrase, Rabbi, Teacher, and Preacher in Israel, and there is a long history of using sermons in Judaism as part of education, ethics, a call to repentance, or as a message of hope, often during difficult times.

In 1939, Rabbi Philip R. Alstat, an early leader of Conservative Judaism, spoke and wrote about the lesson of hope that the festival of Passover could give to the Jewish people, despite the rising power of Nazism in Europe:[9] he counseled hope, and even gratitude, as part of Jewish strength to withstand the pain of events in Europe:

Perhaps in our generation the counsel of our Talmudic sages may seem superfluous, for today the story of our enslavement in Egypt is kept alive not only by ritualistic symbolism, but even more so by tragic realism. We are the contemporaries and witnesses of its daily re-enactment. Are not our hapless brethren in the German Reich eating "the bread of affliction"? Are not their lives embittered by complete disenfranchisement and forced labor? Are they not lashed mercilessly by brutal taskmasters behind the walls of concentration camps? Are not many of their men-folk being murdered in cold blood? Is not the ruthlessness of the Egyptian Pharaoh surpassed by the sadism of the Nazi dictators?
And yet, even in this hour of disaster and degradation, it is still helpful to "visualize oneself among those who had gone forth out of Egypt." It gives stability and equilibrium to the spirit. Only our estranged kinsmen, the assimilated, and the de-Judaized, go to pieces under the impact of the blow....But those who visualize themselves among the groups who have gone forth from the successive Egypts in our history never lose their sense of perspective, nor are they overwhelmed by confusion and despair.... It is this faith, born of racial experience and wisdom, which gives the oppressed the strength to outlive the oppressors and to endure until the day of ultimate triumph when we shall "be brought forth from bondage unto freedom, from sorrow unto joy, from mourning unto festivity, from darkness unto great light, and from servitude unto redemption.

In the same way, he preached a message of hope in 1938 when he said that,[10] "Undaunted, we confidently expect that some day, somehow, the present low ebb of liberty and democracy will be followed by a rising tide whose onrush will irresistibly wash away the ramparts of tyranny." His sermons and articles targeted the Jewish community, the United States, the "family of nations," the "Jewish homeland in Palestine," and frequently described the importance of the "Jewish State"—a nation yet not created, but which he supported with both his words and his actions. He shared his vision of that State by proclaiming that, "Whether the Jewish State be large or small, its importance in the family of nations will be determined, not by its limited area, but by its creative genius and cultural contributions to mankind. Like Judaea and Athens of old, it may be only a small vessel, but exceedingly rich in precious content."[11]

There are a number of different types of sermons, that differ both in their subject matter and by their intended audience, and accordingly not every preacher is equally well-versed in every type. The types of sermons are:

Sermons can be both written and spoken out loud.

Sermons also differ on the amount of time and effort used to prepare them.

With the advent of reception theory, researchers also became aware that how sermons are listened to affects their meaning as much as how they are delivered. The expectations of the congregation, their prior experience of listening to oral texts, their level of scriptural education, and the relative social positions — often reflected in the physical arrangement — of sermon-goers vis-a-vis the preacher are part of the meaning of the sermon.

Albert Raboteau describes a common style of Black preaching first developed in America in the early nineteenth century, and common throughout the 20th and into the 21st centuries:

The preacher begins calmly, speaking in conversational, if oratorical and occasionally grandiloquent, prose; he then gradually begins to speak more rapidly, excitedly, and to chant his words and time to a regular beat; finally, he reaches an emotional peak in which the chanted speech becomes tonal and merges with the singing, clapping, and shouting of the congregation.[16]