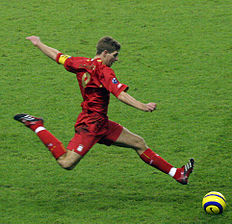 In association football, shooting is a specialized kicking technique mainly used by forwards. The purpose of shooting is to get the ball past the goal line (usually beating the goalkeeper in the process), though some shots may be made in order to win corners or force the keeper to deflect the ball into the path of a teammate - this will only be the case if scoring directly from the shot seems unlikely.[1]