Sidney Hook (December 20, 1902 – July 12, 1989) was an American philosopher of the pragmatist school known for his contributions to the philosophy of history, the philosophy of education, political theory, and ethics. After embracing communism in his youth, Hook was later known for his criticisms of totalitarianism, both fascism and Marxism–Leninism. A pragmatic social democrat, Hook sometimes cooperated with conservatives, particularly in opposing Marxism–Leninism. After World War II, he argued that members of such groups as the Communist Party USA and Leninists like democratic centralists could ethically be barred from holding the offices of public trust because they called for the violent overthrow of democratic governments. 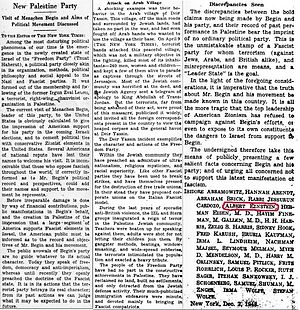 Sidney Hook was born on December 20, 1902, in Brooklyn, New York City, to Jennie and Isaac Hook, Austrian Jewish immigrants. He became a supporter of the Socialist Party of America during the Debs era when he was in high school.

In 1923, he earned a BA at the City College of New York and in 1927 Ph.D. at Columbia University, where he studied under pragmatist philosopher John Dewey.

In 1926, Hook became a professor of philosophy at New York University and was head of the Department of Philosophy from 1948 to 1969. He retired from the University in 1972.[citation needed]

In 1931, Hook began teaching at the New School for Social Research through 1936, after which he taught night school there until the 1960s.[3] By 1933, Hook and New School colleague Horace M. Kallen were serving also on the ACLU's academic freedom committee.[4]

At the beginning of his career, Hook was a prominent expert on Karl Marx's philosophy and was himself a Marxist. He attended the lectures of Karl Korsch in Berlin in 1928 and conducted research at the Marx-Engels Institute in Moscow in the summer of 1929.[5] At first, he wrote enthusiastically about the Soviet Union, and, in 1932, supported the Communist Party's candidate, William Z. Foster, when he ran for President of the United States. However, Hook broke completely with the Comintern in 1933, holding its policies responsible for the triumph of Nazism in Germany. He accused Joseph Stalin of putting "the needs of the Russian state" over the needs of the international revolution.[6]

However, Hook remained active in some of the causes of the far Left during the Great Depression. In 1933, with James Burnham, Hook was one of the organizers of the American Workers Party, led by the Dutch-born pacifist minister A.J. Muste.[7] Hook also debated the meaning of Marxism with radical Max Eastman in a series of public exchanges.[8] Eastman, like Hook, had studied under John Dewey at Columbia University. In the late 1930s, Hook assisted Leon Trotsky in his efforts to clear his name in a special Commission of Inquiry headed by Dewey, which investigated charges made against Trotsky during the Moscow Trials.

The Great Purge encouraged Hook's increasing ambivalence toward Marxism. In 1939, Hook formed the Committee for Cultural Freedom, a short-lived organization that set the stage for his postwar politics by opposing "totalitarianism" on the left and right. By the Cold War, Hook had become a prominent anti-Communist, although he continued to consider himself both a democratic socialist and a secular humanist throughout his life. He was, therefore, an anti-Communist socialist. In 1973, he was one of the signers of the Humanist Manifesto II.[9]

In the late 1940s and early 1950s, Hook helped found Americans for Intellectual Freedom, the Congress for Cultural Freedom (CCF), and the American Committee for Cultural Freedom. These bodies—of which the CCF was most central—were funded in part by the Central Intelligence Agency through a variety of fronts and sought to dissuade American leftists from continuing to advocate cooperation with the Soviet Union as some had previously.[10] Hook later wrote in his memoirs that he, "like almost everyone else," had heard that "the CIA was making some contribution to the financing of the Congress."[11]

In the 1960s, Hook was a frequent critic of the New Left. He was opposed to a unilateral withdrawal of U.S. forces from the Vietnam War and defended California Governor Ronald Reagan's removal of Angela Davis from her professorship at UCLA because of her leadership role in the Communist Party USA.

Hook was elected a fellow of the American Academy of Arts and Sciences in 1965[16] and ended his career in the 1970s and 1980s as a fellow of the conservative Hoover Institution in Stanford, California.

The National Endowment for the Humanities selected Hook for the 1984 Jefferson Lecture, the U.S. government's highest honor for achievement in the humanities.[17] Hook's lecture was entitled "Education in Defense of a Free Society."[18][19]

Hook was a lifelong agnostic.[20]

He married Carrie Katz in 1924, with whom he had one son. The couple separated in 1933.[21][1] Katz had studied at the Rand School in the early 1920s. There, she studied under Scott Nearing and came to write a chapter in his book The Law of Social Revolution entitled "The Russian Revolution of 1917" (1926). Friends from the Rand School included Nerma Berman Oggins, wife of Cy Oggins. She was a Communist Party member who was a "Fosterite" (i.e., she supported William Z. Foster amidst Party factionalism in the last 1920s). She went on to work at the Labor Defense Council.[22] In 1935, Hook married Ann Zinken, with whom he had two children.[21]

Hook's memoir, Out of Step, recounts his life, his activism for a number of educational causes, his controversies with other intellectuals such as Noam Chomsky, and his recollections of Mortimer J. Adler, Bertolt Brecht, Morris Cohen, John Dewey, Max Eastman, Albert Einstein and Bertrand Russell.[24]

In October 2002, a conference marking the centennial of Hook's birth was organized by Matthew Cotter and Robert Talisse and held at the City University of New York Graduate Center in Manhattan.

In April 2011 the Committee for Skeptical Inquiry (CSI) (formerly known as CSICOP) again honored Hook. At a meeting of its executive council in Denver, Colorado he was selected for inclusion in their Pantheon of Skeptics. The Pantheon of Skeptics was created by CSI to remember the legacy of deceased fellows of CSI and their contributions to the cause of scientific skepticism.[25]

Sidney Hook's book The Hero in History was a noticeable event in the studies devoted to the role of the hero, the Great Man in history and the influence of people of significant accomplishments.

Hook opposed all forms of determinism and argued, as had William James, that humans play a creative role in constructing the social world and to transforming their natural environment. Neither humanity nor its universe is determined or finished. For Hook this conviction was crucial. He argued that when a society is at the crossroads of choosing the direction of further development, an individual can play a dramatic role and even become an independent power on whom the choice of the historical pathway depends.[26]

In his book, Hook provided a great number of examples of the influence of great people, and the examples are mostly associated with various crucial moments in history, such as revolutions and crises. Some scholars have critically responded because, as one of them claims, "he does not take into account that an individual's greatest influence can be revealed not so much in the period of the old regime's collapse, but in the formation period of a new one. [...] Besides, he did not make clear the situation when alternatives appear either as the result of a crisis or as the result of Great Man's plan or intention without [a] manifested crisis".[27]

Hook introduced a theoretical division of historic personalities and especially leaders into the eventful man and the event-making man, depending on their influences on the historical process.[28] For example, he considers Lenin as having been an event-making man, because of his having acted in an important circumstance to change the developmental direction not only of Russia but also of the whole world in the 20th century.

Hook attached great importance to accidents and contingencies in history,[29] thus opposing, among others, Herbert Fisher,[30] who made attempts to present history as "waves" of emergencies.

In 1954, Hook published an essay titled "The Ethics of Controversy" in which he set down ten ground rules for democratic discourse within a democracy.[31]

Hook's papers at Stanford[35] include the following articles: