A sinecure (from Latin sine = "without" and cura = "care") means an office that requires or involves little or no responsibility, labour, or active service. The term originated in the medieval church, where it signified a post without any responsibility for the "cure [care] of souls", the regular liturgical and pastoral functions of a cleric, but came to be applied to any post, secular or ecclesiastical, that involved little or no actual work. Sinecures have historically provided a potent tool for governments or monarchs to distribute patronage, while recipients are able to store up titles and easy salaries.

A sinecure is not necessarily a figurehead, which generally requires active participation in government, albeit with a lack of power.

A sinecure can also be given to an individual whose primary job is in another office, but requires a sinecure title to perform that job. For example, the Government House Leader in Canada is often given a sinecure ministry position so that he or she may become a member of the Cabinet. Similar examples are the Lord Privy Seal and the Chancellor of the Duchy of Lancaster in the British cabinet. Other sinecures operate as legal fictions, such as the British office of Crown Steward and Bailiff of the Chiltern Hundreds, used as a legal excuse for resigning from Parliament. 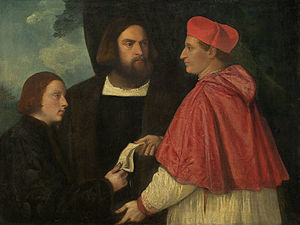 Sinecure, properly a term of ecclesiastical law for a benefice without the care of souls, arose in the English Church when the rector had no care of souls nor resided in the parish, the work of the incumbent being performed by a vicar. Such sinecure rectories were expressly granted by the patron. They were abolished by parliament under the Ecclesiastical Commissioners Act of 1840.

Other ecclesiastical sinecures were certain cathedral dignities to which no spiritual functions attached or incumbencies where by reason of depopulation and the like, the parishioners disappeared or the parish church was allowed to decay. Such cases eventually ceased to exist.[1]

The term is also used of any office or place to which salary emoluments or dignity but no duties are attached. The British civil service and the royal household, for example, were loaded with innumerable offices which, by lapse of time, had become sinecures and were only kept as the reward of political services or to secure voting power in parliament. They were prevalent in the 18th century, but were gradually abolished by statutes during that and the following centuries.

Below is a list of extant sinecures by Country.[2]

Positions associated with the Cabinet

Positions associated with resignation from the House of Commons

Positions associated with the Whips' Office