The Sons of Confederate Veterans, Inc. is an association of male descendants of ex-Confederate soldiers and sailors, founded in Richmond, Virginia, on July 1, 1896.[1][2][3]

The organization has been involved in various controversies. In recent decades, governors, legislators, courts, corporations, and "anti-racist" activists have placed new emphasis on the increasingly controversial public display of Confederate symbols—especially after the 2014 Ferguson unrest, the 2015 Charleston church shooting, and the 2020 death of George Floyd. SCV has responded with its coordinated display of larger and more prominent public displays of the battle flag, some in directly defiant counter-protest.

The objects and purposes of the organization are "to encourage the preservation of history, perpetuate the hallowed memories of brave men, to assist in the observance of Memorial Day, to aid and support all members, widows and orphans, and to perpetuate the record of the services of every Southern soldier."[4]

All male descendants of those who served in the Confederate Armed Forces to the end of the war, who died in prison or while in actual service, who were killed in battle or who were honorably retired or discharged shall be eligible for membership. Membership can be obtained through either lineal or collateral family lines and kinship to a veteran must be documented genealogically. The minimum age for full membership is 12, but there is no minimum for Cadet membership.

See also: List of Past Commanders-in-Chief of the Sons of Confederate Veterans

On July 1, 1896, twenty-four delegates assembled in Richmond, Virginia for the purpose of forming a ″national organization, adopting a constitution similar in every respect to that governing the United Confederate Veterans, and permanently organized under the name United Sons of Confederate Veterans″ (USCV). The preamble to the USCV Constitution read in part: ″To encourage the preservation of history, perpetuate the hallowed memories of brave men, to assist in the observance of Memorial Day, and to perpetuate the record of the services of every Southern Soldier″. Its aims, objects, and purposes were ″not to create or foster, in any manner, any feeling against the North, but to hand down to posterity the story of the glory of the men who wore the gray″.[5] 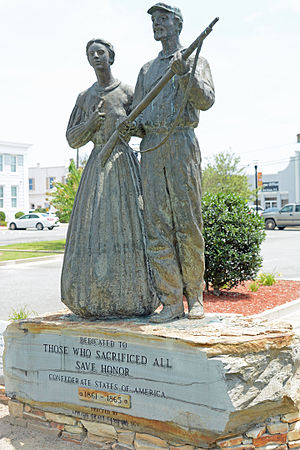 Memorial erected by the SCV in Baxley, Georgia

In the 1990s, disagreements over the purpose of the organization emerged within the SCV. At issue was an alleged shift in the SCV's mission from "maintaining gravestones, erecting monuments and studying Civil War history" to more issue-centric concerns. The SCV's new concerns included "fight[ing] for the right to display Confederate symbols everywhere from schools to statehouses".[6] The more "activist" members of the SCV gained electoral support and were increasingly elected to its leadership positions. Members of the more traditionalist camp alleged that the League of the South had influenced their organization's new direction. One ally of the activist wing claimed that thousands of SCV members are also League of the South members. News reports state that the activists advocate "picketing, aggressive lobbying, issue campaigning and lawsuits" in favor of what they term "heritage defense" to prevent "heritage violations". The SCV defines those as "any attack upon our Confederate Heritage, or the flags, monuments, and symbols which represent it".[7]

In 2002, SCV dissidents formed a new organization, Save the Sons of Confederate Veterans (SSCV), composed of members and former members of SCV.[8] According to SSCV co-founder Walter Charles Hilderman, "about a hundred or so individuals and groups identified themselves on the SSCV Web site as supporting Save the SCV" not long after the group was founded, though the current membership numbers for the SSCV are not available.[9] Boyd Cathey reported in the Southern Mercury that most of the dissension had ended by 2003, and the majority of the members of the SCV agreed with the heritage preservation activities espoused by the new SCV leadership.[10] One of the main figures in that new SCV leadership, South Carolina politician and investment advisor Ron Wilson, served as Commander-in-Chief from 2002 to 2004. In 2012, he was sentenced to prison for running a Ponzi scheme as part of his investment business; ironically, among those he defrauded were members of the SCV.[11]

In early 2005, the SCV council sued to expel SCV Commander-in-Chief Dennis Sweeney from office. The court initially granted the council temporary control of the organization, but its final decision returned power to Sweeney. Thirteen of the 25 council members were expelled from the council shortly after Sweeney regained control. Nine of the council members expelled were former Commanders-in-Chief of the SCV, a status that heretofore had come with a life membership on the council.[12][13] In February, Cathey wrote in the Southern Mercury that most of the SCV's members had united against the "War on Southern Culture".[10] By the SCV's summer 2005 convention, activists firmly controlled the council. They severed much of the SCV's long-standing relationship with the more traditionalist Military Order of the Stars and Bars (MOSB). MOSB, founded in 1938, had been closely involved with the SCV, sharing its headquarters since 1992 and co-publishing Southern Mercury. The MOSB's Commander General, Daniel Jones, citing "the continuing political turmoil within the SCV", moved the MOSB out of the shared quarters, ended the joint magazine publishing enterprise, and separated the two organizations' finances. In 2006, for the first time, the two organizations held separate conventions.[14]

The SCV, much like other Southern nationalist or Neo-Confederate organizations, has come under extensive condemnation from the political left in association with an ongoing cultural revolution otherwise known as "Great Awokening", which has also notably targeted Abraham Lincoln and other historical political figures who shared at the time common but now highly politically incorrect views on issues such as race, including early progressives such as Theodore Roosevelt and Woodrow Wilson.

See also: List of notable members of the Sons of Confederate Veterans

Notable members of the Sons of Confederate Veterans have included: