From Infogalactic: the planetary knowledge core
Jump to: navigation, search
This article is about the German city. For the unit of measure, see Stadia (length).
For other uses, see Stade (disambiguation).

Stade (German pronunciation: [ˈʃtaːdə]) is a city in Lower Saxony, Germany and part of the Hamburg Metropolitan Region (Metropolregion Hamburg). It is the seat of the district named after it. The city was first mentioned in a document from 994.

It includes the urban districts of Bützfleth, Hagen, Haddorf and Wiepenkathen which have a district council ("Ortsrat") of their own with some autonomous decision making rights.

Stade is located on the lower Elbe river (Lower Elbe) and the German Timber-Frame Road.

The first human settlers came to the Stade area in 30,000 BC.

On 2 May 1209 Otto IV granted important town privileges ("Stadtrecht") to Stade. Otto IV confirmed the burghers to be personally free and recognised them constituting a political entity of their own law, the burgenses and optimi cives of Stade.[3] Property within the municipal boundaries could not be subjected to feudal overlordship and was to be freely inherited without feudal claims to reversion. Fair juridical procedures were constituted and maximal fines fixed. Otto IV obliged himself to prevent burghers from being taken as hostages and to liberate captured burghers. 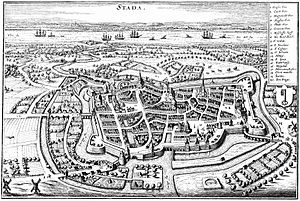 Stade in 1640 (drawing by Matthäus Merian) 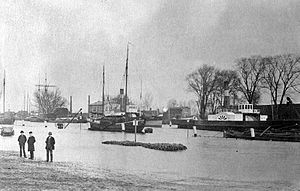 New harbor during the 1894 flooding

In medieval times (from the 13th century to the late 17th century), Stade was a prominent member of the Hanseatic League, but was later eclipsed by Hamburg. In 1611 the city signed a contract with Sephardic Jews, allowing the foundation of a community. In 1613 John Frederick, Administrator of the Prince-Archbishopric, followed by settling Ashkenazic Jews in the city, but during the turmoil of Catholic conquest and Lutheran reconquest the last archival traces of Jews date from 1630. In 1648, by the Treaty of Westphalia, the Prince-Archbishopric of Bremen underwent a constitutional transformation from a prince-bishopric into a monarchy, the Duchy of Bremen. The duchy and the neighboured Principality of Verden, colloquially referred to as Bremen-Verden, were granted by the Treaty of Westphalia as an appanage to the Swedish crown. Stade, already under Swedish occupation since 1645, was a part of the Swedish province of Bremen-Verden-Wildeshausen from 1645 to 1712, and some of the buildings built by the Swedes are still in use today.

Stade's heyday lasted until the Thirty Years' War. In 1628 Tilly conquered the town; shortly thereafter, Sweden took possession of it until 1636. After a period of Danish occupation, Sweden finally recaptured it in 1643 and was also officially granted possession of it, together with the Archbishopric of Bremen, in the Peace of Westphalia. Two-thirds of the town were razed in the great town fire on 26 May 1659. The town was rebuilt again to the same plan.

From 1675 to 1676, in the Swedish-Brandenburg War, Swedish Stade was conquered during a campaign by Denmark and several states of the Holy Roman Empire and remained in allied hands until the end of that war in 1679. Stade, as the headquarters of the Swedish Stadhalter, was besieged from early April 1676 to 13 Aug 1676. In the wake of the Treaty of Saint Germain in 1679, Stade was once again awarded to Sweden.

The Elbe customs station near Stade, in Brunshausen at the mouth of the Schwinge, played special role in trading on the River Elbe from the period of the archbishopric. In 1663, the Swedes stationed an Elbe customs frigate (Elbzollfregatte) as a permanent patrol ship. This arrangement continued to exist under various rulers until 1850 and the customs station on the Schwinge fieldworks itself existed until 1865.[4]

Swedish sovereignty ended in 1712. Danish troops besieged the town in the Great Northern War and shelled it from 29 August to 7 September 1712 that destroyed 152 houses, a quarter of the built-up area.

During the Swedish times Stade was the capital of the province.

In 1712 Denmark conquered Stade and the whole of Bremen-Verden. Stade remained Bremen-Verden's capital also after the Danes ceded it to the Electorate of Brunswick and Lunenburg (Hanover) in 1715. When in 1823 Bremen-Verden was replaced by new administrative forms, Stade continued to be the capital of the Stade region.

In 1757 following the French Invasion of Hanover, the Army of Observation under the Duke of Cumberland and the Privy Council of Hanover (government) took shelter in Stade. Cumberland prepared to defend the town before agreeing the Convention of Klosterzeven which brought about a temporary armistice.

By the end of the 17th century Ashkenazi Jews reappeared in Stade. In 1842 the Kingdom of Hanover granted equal rights to Jews and promoted to build up Jewish congregations and a regional superstructure (rabbinate) within a nationwide scope. The Jews in Stade regarded this a progress and a burden alike, because prior they hadn't employed any rabbi and religion teacher due to the implied financial burden. In 1845 – according to the new law – a land-rabbinate, under Land-Rabbi Joseph Heilbut, was established in the city, serving 16 Jewish congregations, which were founded over the years in the whole Stade Region, with altogether 1,250 Jews in 1864 (highest number ever reached). The local authorities now requested, that the Jewish congregations establish synagogues and Jewish education for the pupils. In 1849 Stade's synagogue opened, but had to close due to financial restrictions in 1908. And a teacher for Jewish religion and Hebrew was employed (after 1890 Stade's community couldn't afford a teacher any more). From 1903 on the Jewish community of Stade was granted public subsidies to continue functioning. The Stade Region stayed a Jewish diaspora, and from 1860 on Stade's land-rabbinate was never staffed again, but served alternately by one of the other three Hanoverian land-rabbinates. Labour migration and emigration[5] to urban centres outside the Stade Region and Jewish demography rather lead to a reduction of the number of Jews in the Stade Region (786 in 1913, 716 in 1928).[6] However, most of the remaining Jews were deported during the Nazi reign. During World War II, Stade remained completely untouched by allied bombings. 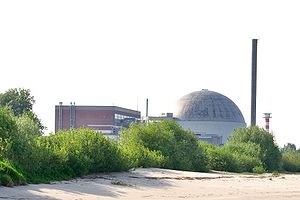 In past decades, Stade has economically benefited significantly from the presence of chemical and aerospace industry at the Elbe river, most notably Dow Chemical and Airbus. Also by the Elbe at Stade is the decommissioned Stade Nuclear Power Plant, which was connected to the power grid from 1972 to 2003. By the time the plant was brought offline, it was Germany's second oldest reactor. Following Germany's 2002 decision to phase out nuclear power generation, Stade was the first German plant to be affected; it was closed down permanently on 14 November 2003. The process of dismantling the facility is supposed to be completed by 2015. Close to the former nuclear plant there is an inactive oil-fired power station, the Schilling Power Station.

In late 2007, the metropolitan rail line (S-Bahn) S3 of the Hamburger Verkehrsverbund (Hamburg Transport Association) was extended from Hamburg to Stade. Trains depart Stade station every 20 minutes (at peak times) and reach central Hamburg in one hour. The new transit connection is expected to increase the city's attractiveness for commuters as well as businesses, although the absence of a service after midnight remains a bone of contention for many town residents.