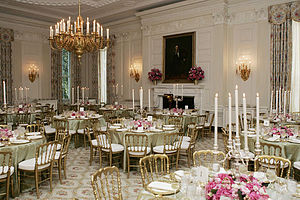 Round tables lavishly set for a state dinner held in the State Dining Room at the White House. The large gold charger plates are from the Eisenhower china service.

A state dinner or state lunch is a dinner or banquet paid by a government and hosted by a head of state in his or her official residence in order to renew and celebrate diplomatic ties between the host country and the country of a foreign head of state or head of government who was issued an invitation. It may form part of a state visit or diplomatic conference. In many countries around the world, there are many different rules governed by protocol. State dinners often consist of, but are not limited to, black tie or white tie dress, military honor guards, a four or five course meal, musical entertainment, dancing, and speeches made on behalf of the head of state hosting the state dinner as well as the foreign head of state.

At the beginning of a state banquet, a foreign head of state is greeted by the president in the North Drawing Room. A tent constructed in the Mughal Garden within the environs of the presidential palace is the outdoor setting for state banquets. During the evening, the gardens are lit up with earthen diyas, string lights, and decorated with flowers and rangoli that become a scene for entertainment. After a performance by Rajasthani singers, Indian percussion instruments like the mridangam, tabla, ghatam and khanjeera, as well as India's diverse classical dances in which Bharatnatyam, Odissi and Kathak are carefully choreographed, will all be showcased in front of the guests.

Inside the tent, speeches highlighting bilateral diplomatic relations are delivered by the President of India and the foreign head of state. The guests are then offered a sumptuous meal of Indian delicacies while the Indian Navy Band performs music.

State banquets follow an official arrival ceremony which occurs at the Rashtrapati Bhavan earlier in the day.

In the United Kingdom, state dinners are hosted by the head of state, who is the British sovereign, currently Queen Elizabeth II. Traditionally all state dinners were held at Buckingham Palace because of its position in the heart of London. However, in recent years, banquets are more often held at Windsor Castle in Berkshire. Organisation of the state dinner usually falls to the Master of the Household with a seating plan confirmed both by the Queen and the Foreign and Commonwealth Office. State dinners are usually held for visiting heads of state and are very elaborate; Royal Protocol is generally very strict but this has been played down over recent years. All speeches that are read are again checked and confirmed by the Foreign office, and amended. Gifts are exchanged by both parties.

A tent located on the South Lawn was the venue for a state dinner held on the evening of November 24, 2009. President Barack Obama and First Lady Michelle Obama dined with Prime Minister Manmohan Singh of India and his wife, Gursharan Kaur.

In the United States, a state dinner is a formal dinner, more often black tie in recent years rather than white tie, which is held in honor of a foreign head of state, such as a king, queen, president, or any head of government. A state dinner is hosted by the President of the United States and held in the State Dining Room at the White House in Washington D.C. Other formal dinners for important people of other nations, such as a prince or princess, are called official dinners, the difference being that the federal government does not pay for them.

As is customary for all incoming state visits by foreign heads of state, a state dinner follows a State Arrival Ceremony which occurs on the South Lawn earlier in the day. In addition, state dinners held in recent years are also given media coverage by the public affairs TV channel, C-SPAN. 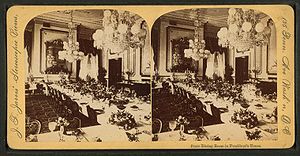 The State Dining Room at the White House as depicted in this 1850s stereoscopic view. Long banquet tables were used for state dinners before they were disbanded in the 1960s by First Lady Jacqueline Kennedy in favor of round tables.

In the early 19th century, dinners honoring the president's Cabinet, Congress, or other dignitaries were called 'state dinners' even though they lacked official foreign representation. Under such conditions, large receptions and dinners were a rare occurrence as Washington, D.C., society was a collection of isolated villages widely separated and at times almost inaccessible. Times changed and so did the nation’s capital as a series of state dinners were held every winter social season to honor Congress, the Supreme Court, and members of the diplomatic corps.

In the late 19th century, the term state dinner became synonymous with a dinner hosted by the president honoring a foreign head of state. The first visiting head of state to attend a state dinner at the White House was King David Kalakaua of the Kingdom of Hawaii, hosted by Ulysses S. Grant on December 12, 1874.[1]

The restoration of the White House by the architectural firm McKim, Mead, and White in 1902 created a more proper setting for official entertainment to occur. When the president's office moved to the newly constructed West Wing, the Neoclassical remodeling of the Executive Residence's state rooms gave Theodore Roosevelt a perfect venue reflecting the United States' growing power and influence around the world. While the White House underwent a complete interior reconstruction from 1948 to 1952, Harry S. Truman and Bess Truman lived at Blair House and state dinners were held in local hotels in the nation's capital. Long banquet tables were always used in the State Dining Room prior to the administration of John F. Kennedy. However, these were permanently disbanded by Jacqueline Kennedy and replaced with round tables which could seat a far greater number of guests, approximately 120 to 140, in such a tight and confined space. To this day, presidents and first ladies continue to add their own personal touches and flair of how they wish to entertain foreign guests of state at the White House, having full access to the Vermeil collection of gilted candelabras and flatware, the President's House crystal pattern, as well as the priceless collection of White House china which dates from the James Monroe administration to the George W. Bush administration, for use at a state dinner.[1] 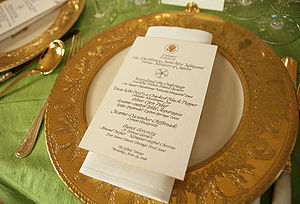 During a state dinner, honor guards and color guards in full dress uniform from all branches of the United States Armed Forces will be dispatched for ceremonial duty at the White House. The President of the United States and the First Lady of the United States will formally greet the visiting head of state and his or her spouse at the North Portico entrance of the White House, who have traveled in a motorcade from Blair House, the traditional guest quarters of foreign heads of state and dignitaries, or from a foreign ambassador's residence in the area of Embassy Row in Northwest, Washington, D.C. A brief photo opportunity for the media at the top of the staircase will occur. The president and first lady will then escort the visiting head of state and his or her spouse to the Yellow Oval Room for a reception on the residence floor where the president's guests will be served hors d'œuvres, cocktails, wine, or champagne. The president and first lady will also introduce their guests to a wide array of people from the United States such as ambassadors, diplomats, members of Congress, members of the president's Cabinet, and other prominent people such as celebrities and Hollywood A-list movie stars who are invited at the discretion of the president and first lady.

After a receiving line whereby the president introduces the visiting head of state to all of the invited guests, the president and the visiting head of state, his or her spouse, and the first lady, will walk down the Cross Hall and proceed to the State Dining Room where a four or five-course meal, typically consisting of an appetizer/soup, fish, meat, salad and dessert, will be served to the guests. The menu planned in advance for a state dinner and then prepared by the White House Executive Chef and White House Executive Pastry Chef will center around the national cuisine of the visiting foreign head of state by using local ingredients, flavors, and ethnic foods. Before eating the meal, both the president and the visiting foreign head of state will give a speech on a lectern, paying tribute to diplomatic relations between the United States and the foreign head of state's country. Members of the "Strolling Strings," violinists from the United States Marine Band "The President's Own," will disperse throughout the State Dining Room and perform musical entertainment for the seated guests around the candle-lit tables. After the meal, the guests are seated in the East Room and are formally entertained by a musical ensemble such as a pianist, a singer, an orchestra, or band of national renown. On past occasions, dancing has also been a component at the conclusion of a state dinner.

In Switzerland, the head of the state is the Swiss Federal Council (not only its president). For this reason, the seven Federal Councillors (and their spouses) are invited to the state dinners organised in Bern during state visits.[2]