Stewart Lee Udall (January 31, 1920 – March 20, 2010)[1][2] was an American politician and later, a federal government official. After serving three terms as a congressman from Arizona, he served as Secretary of the Interior from 1961 to 1969, under presidents John F. Kennedy and Lyndon B. Johnson.[3]

Born January 31, 1920, in Saint Johns, Arizona, to Louisa Lee Udall (1893–1974) and Levi Stewart Udall (1891–1960). He had five siblings: Inez, Elma, Morris (Mo), Eloise, and David Burr. As a young boy Stewart worked on the family farm in St. Johns. Stewart was remembered by his mother as a child with tremendous energy and an unquenchable curiosity.[4]

Stewart Udall attended the University of Arizona for two years until World War II. He served four years in the Air Force as an enlisted gunner on a B-24 Liberator, flying fifty missions over Western Europe from Italy with the 736th Bomb Squadron, 454th Bomb Group, for which he received the Air Medal with three Oak Leaf Clusters. He returned to the University of Arizona in 1946, where he attended law school and played guard on a championship basketball team. In 1947, Udall, along with his brother Mo, helped integrate the University of Arizona cafeteria. Mo and Stewart were respected student athletes and Mo was student body president. On their way to lunch at the Student Union one day, they saw a group of black students eating lunch outside the building. Black students were allowed to buy food in the cafeteria, but had to eat outside. When Mo and Stewart invited Morgan Maxwell Jr., a black freshman, to share their table in the cafeteria, it helped to calm some long-simmering racial issues surrounding segregation at the university.[5]

Udall received his law degree and was admitted to the Arizona bar in 1948. He began his law practice in Tucson shortly thereafter.[4] Udall became increasingly active in public service, being elected to the School Board of Amphitheater Public Schools (District 10) in Tucson in June 1951. As a school board member, he participated in desegregating the Amphitheater School District before the U.S. Supreme Court ruled in Brown v. Board of Education.[6] Udall was elected to the U.S. House of Representatives from Arizona's Second District in 1954. He served with distinction in the House for three terms on the Interior and Education and Labor committees.[7]

Secretary of the Interior 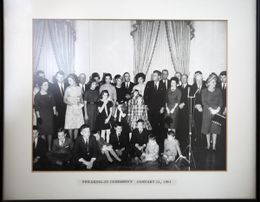 Udall (rear) standing next to Mrs. John F. Kennedy at the president's Swearing In Ceremony, January 21, 1961

Udall served as Secretary of the Interior from 1961 to 1969 under presidents John F. Kennedy and Lyndon B. Johnson.[8]

Udall played a key role in the enactment of environmental laws such as the Clear Air, Water Quality and Clean Water Restoration Acts and Amendments, the Wilderness Act of 1964, the Endangered Species Preservation Act of 1966, the Land and Water Conservation Fund Act of 1965, the Solid Waste Disposal Act of 1965, the National Trail System Act of 1968, and Wild and Scenic Rivers Act of 1968.[9]

Soon after becoming the Secretary of Interior, Udall told the Washington Redskins owner, George Preston Marshall, that he had to integrate the football team as every other franchise in the NFL already had, or risk being evicted from the Washington, D.C. stadium, which was federally owned.[10] Marshall integrated the team in 1962.

During Udall's tenure as Secretary of the Interior, in September 1962, he was summoned unexpectedly into a meeting with Soviet Premier Nikita Khrushchev while on a tour of the Soviet Union. It was during this meeting that Khrushchev famously hinted at his secret deployment of nuclear missiles to Cuba by telling Udall: "It's been a long time since you could spank us like a little boy. Now we can swat your ass." This was a prelude to the Cuban Missile Crisis.[11]

Udall also helped spark a cultural renaissance in America by setting in motion initiatives that led to the Kennedy Center, Wolf Trap National Park for the Performing Arts, the National Endowment for the Arts, the National Endowment for the Humanities, and the revived Ford's Theatre. Upon Udall's recommendation President Kennedy asked former U.S. Poet Laureate Robert Frost to read an original poem at his inauguration, establishing a tradition for that occasion.[12] 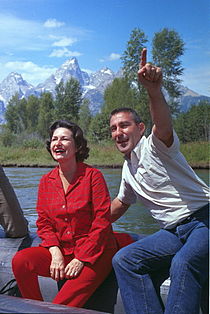 A pioneer of the environmental movement, Udall warned of a conservation crisis in the 1960s with his best-selling book on environmental attitudes in the United States, The Quiet Crisis (1963).[12] In the book, he wrote about the dangers of pollution, overuse of natural resources, and dwindling open spaces. Along with Rachel Carson's Silent Spring, The Quiet Crisis is credited with creating a consciousness in the country that led to the environmental movement. Udall was a staunch supporter of Rachel Carson and her work. Stewart Udall once stated, "Plans to protect air and water, wilderness and wildlife are in fact, plans to protect Man."

Udall also had the foresight, when he was Secretary of the Interior, to spearhead the use of NASA satellites to produce images of Earth from space for scientific research, leading to development of the Earth Resources Observation and Science (EROS) center at the U.S. Geological Survey. Over the course of more than forty years, that program mapped the Earth from space, showing the physical changes to the planet.[13]

In 1967, the National Audubon Society awarded Udall its highest honor, the Audubon medal.[14]

During the energy crisis in the 1970s, Udall advocated the use of solar energy as one remedy to the crisis. In October 1972, Udall published a seminal article in The Atlantic Monthly, entitled "The Last Traffic Jam". The article contains arguments for the proposition that "less is more" and foresaw problems with U.S. transportation and energy policy and competition with emerging markets for scarce resources.[15] In 1974, Udall, along with Charles Conconi and David Osterhout, wrote The Energy Balloon, discussing the energy policies of the United States.

After leaving government service in 1969, Udall taught for a year at the School of Forestry at Yale University as a Visiting Professor of Environmental Humanism.[16] He later devoted his time to writing books and articles about environmental issues and to practicing law. In 1971, he published America's Natural Treasures: National Nature Monuments and Seashores, which is about America's national parks, monuments, and reserves.[17]

In 1979, he left Washington to return to the West. In 1980, Udall was elected to the Central Arizona Water Conservation District Board and commissioned as a member of the Arizona Parks Task Force.[4] Udall was presented with the Ansel Adams Award in 1986, the Wilderness Society's highest conservation award.[4] He also was awarded the United Nations Gold Medal for Lifetime Achievement.[4] Udall received the Common Cause Public Service Achievement Award for his lifelong protection of the environment and defense of American citizens who were victims of nuclear weapons testing.[4]

In 1987, he published To the Inland Empire: Coronado and our Spanish Legacy, which retraces the trails of Spanish explorer Francisco Vásquez de Coronado as he searched for the "golden cities" of Cibola in what now is Arizona, New Mexico, Oklahoma, and Texas.[4] Udall published The Quiet Crisis and the Next Generation in 1988, a revised edition with nine new chapters of The Quiet Crisis (1963). "The Quiet Crisis" introduced the Myth of Superabundance.[4] In 1990, he co-authored Beyond the Mythic West, which examines effects of change upon the inhabitants and lands of the western United States.[4] In 1998, he published The Myths of August: A Personal Exploration of Our Tragic Cold War Affairs with the Atom.[18]

One of Udall's last essays was his "Letter to My Grandchildren", written with his wife, Ermalee, which asked for their grandchildren's assistance in advocating for protection of the Earth. This letter resulted in Udall being contacted by the VillageTown Stewards who asked that they videotape the thoughts in that letter, since it was more likely that the generation of his grandchildren watch internet videos than read letters. Udall agreed, and the video may be seen on-line at, Stewart Udall on History: the greatest mistake. This video was then transcribed and adapted to a chapter of a book, Life Liberty Happiness. Udall also agreed to serve as Chairman Emeritus of the VillageTown Stewards. The video was filmed coincidentally on the Summer solstice of 2009 and Udall died nine months later on the Spring equinox. His public memorial was held on the Summer solstice of 2010. It is believed this video was the last recording of Udall's views.

In November 2009, Congress enacted legislation to honor Stewart Udall by renaming the Morris K. Udall Foundation as the Morris K. Udall and Stewart L. Udall Foundation, in recognition of the historic Interior Secretary's contributions. The Udall Foundation, an independent federal agency, was created initially to honor the legacy of the late Morris Udall, who represented Southern Arizona in the U.S. House of Representatives for thirty years. Stewart Udall, who also represented Southern Arizona in Congress from 1955 to 1961, is Morris Udall's older brother. The two worked together on many environmental and Native American initiatives while Stewart Udall was Secretary of the Interior and Morris Udall a member of Congress. Congress recognized that the Udall legacy really was a shared legacy, rooted in the work of the Udall brothers, which dominated environmental reform for three decades. 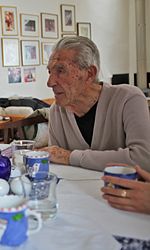 The still-active Stewart Udall at home January 23, 2010, less than two months before his death at age 90

At the age of 90, Stewart L. Udall died peacefully and surrounded by his family at his home in the foothills of Santa Fe, New Mexico, in the early hours of the Spring Equinox, March 20, 2010.[19] After his death, President Barack Obama noted on March 20, 2010, "For the better part of three decades, Stewart Udall served this nation honorably. Whether in the skies above Italy in World War II, in Congress, or as Secretary of the Interior, Stewart Udall left an indelible mark on this nation and inspired countless Americans who will continue his fight for clean air, clean water, and to maintain our many natural treasures." [20]

Stewart Udall was married to Ermalee Webb (died 2001) with whom he had two daughters, (Lori and Lynn) and four sons, (Denis, Jay, Scott, and Tom).

He was the brother of U.S. Representative and 1976 presidential candidate, Mo Udall; he served as Mo's campaign manager during the Democratic primary election, which Mo lost to Jimmy Carter. Stewart Udall's son Tom Udall and nephew Mark Udall (Mo's son), both former members of the U.S. House of Representatives, were elected to the United States Senate from New Mexico and Colorado, respectively, in 2008.