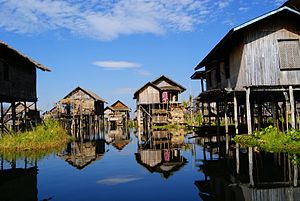 City of Yawnghwe in the Inle Lake

Stilt houses or pile dwellings or palafitte are houses raised on piles over the surface of the soil or a body of water. Stilt houses are built primarily as a protection against flooding,[1] but also serve to keep out vermin.[2] The shady space under the house can be used for work or storage.[3]

Houses where permafrost is present, in the Arctic, are built on stilts to keep permafrost under them from melting. Permafrost can be up to 70% water. While it's frozen, it provides a stable foundation. If heat radiating from the bottom of a home melts the permafrost, however, the home will go out of level, and start sinking into the ground. While other, more elaborate means of keeping the permafrost from melting are available, raising the home off the ground on stilts is one of the most effective ways. 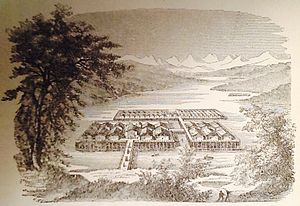 In the Neolithic and Bronze Age, stilt-houses settlements were common in the Alpine and Pianura Padana (Terramare) region.[4] Remains have been found at the Ljubljana Marshes in Slovenia and at the Mondsee and Attersee lakes in Upper Austria, for example. Early archaeologists like Ferdinand Keller thought they formed artificial islands, much like the Scottish Crannogs, but today it is clear that the majority of settlements were located on the shores of lakes and were only inundated later on.[5] Reconstructed stilt houses are shown in open-air museums in Unteruhldingen and Zürich (Pfahlbauland). In June 2011, the prehistoric pile dwellings in six Alpine states were designated as the UNESCO World Heritage Site. A single Scandinavian pile dwelling, the Alvastra stilt houses, has been excavated in Sweden.[citation needed]

According to archeological evidences stilt-houses settlements were an architectural norm in the Caroline Islands and Micronesia and are still present in Oceania today.[6] Today, stilt houses are still common in parts of the Mosquito Coast in northeastern Nicaragua, northern Brazil, South East Asia, Papua New Guinea and West Africa.[7] In the Alps, similar buildings, known as raccards, are still in use as granaries. In England, granaries are placed on staddle stones, similar to stilts, to prevent mice and rats getting to the grain. Stilted graneries are also a common feature in West Africa, e.g., in the Malinke language regions of Mali and Guinea.[citation needed] 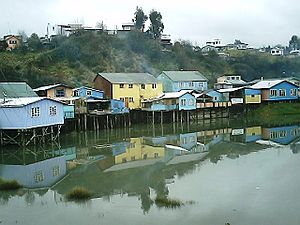 Summer, family dwellings of the natives of the Kamchatka Peninsula called Itelmens or Kamchadals. Their winter dwellings were earth sheltered and communal.

Stilt houses are also common in the western hemisphere, and appear to have been an indigenous creation by the Amerindians in pre-Columbian times. They are especially widespread along the banks of the tropical river valleys of South America (Palafito), notably the Amazon and Orinoco river systems. Stilt houses were such a prevalent feature along the shores of Lake Maracaibo that Amerigo Vespucci was inspired to name the region "Venezuela" (little Venice). As the costs of hurricane damage increase more and more houses along the Gulf Coast are being built as or converted to stilt houses.[8]