A stipend is a form of salary, such as for an internship or apprenticeship.[1] It is often distinct from a wage or a salary because it does not necessarily represent payment for work performed; instead it represents a payment that enables somebody to be exempt partly or wholly from waged or salaried employment in order to undertake a role that is normally unpaid (e.g. a magistrate in England) or voluntary, or which cannot be measured in terms of a task (e.g. members of the clergy).

Stipends are usually lower than what would be expected as a permanent salary for similar work. This is because the stipend is complemented by other benefits such as accreditation, instruction, food, and/or accommodation. Universities usually refer to money paid to graduate students as a stipend, rather than as wages, to reflect complementary benefits. 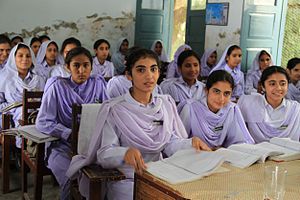 The UK government is committed to getting two million more girls into school in Pakistan by 2015. UK aid has already helped more than 590,000 girls in Khyber Pakhtunkhwa stay in school over the last few years by giving them small cash stipends.[citation needed]

Stipends may be used by non-profits or organizations working with oppressed, or other less-represented groups of people such as youth. These organizations may stipend youth at a higher rate than local minimum wage rates, or living wage, to empower them to enter the workforce.[citation needed] This type of stipend normally lasts for less than a year.

In some Catholic jurisdictions and parishes, a Mass Stipend is a payment made by members of the church, which is generally nominal, to a priest for saying a Mass, although as it is considered simony to demand payment for a sacrament, stipends are seen as gifts.[2]

Stipend has a specific, different, use in the Church of England, meaning the salary of a stipendiary minister, one who receives payment directly from the diocese (as opposed to other forms of disbursement such as free use of a house in return for clerical duties, known as house-for-duty). A non-stipendiary minister (increasingly being termed a self-supporting minister or an ordained local minister) is therefore one who is licensed to perform clerical duties but without receiving any kind of payment from the diocese — although non-stipendiary ministers often receive reimbursement of expenses incurred in pursuit of their duties, e.g. travel, postage, and telephone costs. Non-stipendiary ministers normally depend on secular employment or pensions for their income and are often unavailable for pastoral duties when they are fulfilling their obligations to their employer. A minister in secular employment, on the other hand, is a minister who exercises a significant ministry in and through their work. This is distinct from chaplaincy.