In common law systems, a superior court is a court of general competence which typically has unlimited jurisdiction with regard to civil and criminal legal cases. A superior court is "superior" relative to a court with limited jurisdiction (see lower court), which is restricted to civil cases involving monetary amounts with a specific limit, or criminal cases involving offenses of a less serious nature. A superior court may hear appeals from lower courts (see court of appeal).

Origin of the term "superior court"

In England and Wales, the Court of Appeal,[1] the High Court[2] and the Crown Court[3] are all superior courts of record.

The provincial and territorial superior courts of original jurisdiction are courts of general jurisdiction: all legal matters fall within their jurisdiction, unless assigned elsewhere by statute passed by the appropriate legislative authority.[10] Their jurisdiction typically includes civil lawsuits involving contracts, torts, property, and family law. They also have jurisdiction over criminal prosecutions for indictable offences under the Criminal Code of Canada.[11] They also hear civil appeals from decisions of the provincial and territorial "inferior" courts, as well as appeals from those courts in summary conviction matters under the Criminal Code. They also have jurisdiction of judicial review over administrative decisions by provincial or territorial government entities such as labour boards, human rights tribunals and licensing authorities.[citation needed]

The general superior courts of South Africa are the High Courts, the Supreme Court of Appeal and the Constitutional Court.[14]

The High Courts are courts of first instance with general jurisdiction; they can hear all cases except those where exclusive jurisdiction is granted by law to another court. Most cases are, however, tried in the magistrates' courts or other lower courts, and appeals from these courts are heard by the High Court.

There are also specialist superior courts with exclusive jurisdiction over certain matters; these include the Labour Court, the Labour Appeal Court, the Electoral Court and the Land Claims Court. 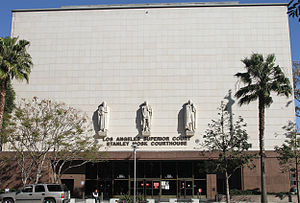 In a number of jurisdictions in the United States, the Superior Court is a state trial court of general jurisdiction with power to hear and decide any civil or criminal action which is not specially designated to be heard in some other courts. California, Washington, Maine, the District of Columbia, and Georgia are all examples of such jurisdictions. In other states, equivalent courts are also known as courts of common pleas, (Pennsylvania, Ohio, and others), circuit courts (Illinois, Michigan, Oregon and others), district courts (Louisiana, Texas, Hawaii and others) or, in the case of New York, supreme courts.

The term "superior court" raises the obvious question of superior to what. Formerly, many jurisdictions had inferior trial courts of limited jurisdiction such as municipal courts, traffic courts, and justice of the peace courts, so it was natural to call the next level of courts "superior." However, some states, like California, have unified their court systems. In California, all lower courts were absorbed into the Superior Courts of California after 1998. The lower courts now exist only as mere administrative subdivisions of the superior courts. The superior courts are legally no longer superior to any other trial courts. Thus, the term "superior court" persists in California only as a matter of tradition.