Sussex Police is the territorial police force responsible for policing the county of Sussex in southern England (which for administrative purposes is split into East Sussex, West Sussex and the city of Brighton and Hove). Its headquarters is in Lewes, East Sussex.[3]

Policing in the county can be traced back to the first force established in Brighton in 1830. A few years later on 13 March 1844 Chief Constable Henry Solomon was murdered in his office by a prisoner he was interviewing. He is believed to be the only chief officer to have suffered such a fate. Prior to 1830 local watchmen were appointed to provide some degree of law enforcement in the area. In 1812, there were some 12 watchmen who were responsible for the town. By 1814 the number had grown to 28 and at this time the title of constable was in use for them. By 1868 the force had grown to 100 officers and helmets replaced top hats.

In 1918 the first woman was appointed as a police officer in this force and by 1930 it had grown to 216 officers.[citation needed] Brighton Police were the first force to introduce police radios on 14 September 1933. Forces were also established for the counties of East Sussex and West Sussex, as well as separate forces in the boroughs of Brighton, Eastbourne and Hastings. These forces amalgamated temporarily during the Second World War, from 1943 until 1947, but then policing reverted to the old system for another two decades.

Sussex Police are also responsible for Gatwick Airport under the command of Superintendent Brian Bracher.

Districts are further divided into Neighbourhood Policing Teams (NPTs), each led by an Inspector. The NPTs are responsible for the bulk of the community work undertaken in an area, and look to deal with long term local issues including Anti-Social Behaviour. Their role stems from the traditional view of 'bobbies on the beat' with Police Community Support Officers (PCSOs) providing a high visibility profile on the street, albeit with limited policing powers. Special Constables may also be attached to NPTs, and due to Budget Cuts this is becoming increasingly common.

Police response is covered by Neighborhood Response Teams (NRT) operating from a number of "hub" stations across the area and providing the initial response to most emergency and prompt attendance calls. These teams are led locally by a sergeant and overall they are managed by an Inspector. These teams work 24 hours a day, 7 days a week, 365 days a year. Secondary investigation of crime not dealt with by specialist teams - for example CID - is managed by Response Investigation Teams (RIT) who work closely with the NRT.

The police and crime commissioner is scrutinised by the Sussex Police and Crime Panel, made up of elected councillors from the local authorities in the police area.

Sussex Police used to operate an MD-902 helicopter, callsign Hotel 900 jointly with the South East Coast Ambulance Service, providing both policing and emergency medical support to Sussex and beyond. This helicopter has now been transferred to the National Police Air Service (NPAS) and is currently based at Redhill Aerodrome, covering the South East region with the callsign NPAS15.

Sussex Police have a dedicated Counter-Terrorist Intelligence Unit (CTIU) which works alongside the rest of the force in protecting and reassuring the public, and reducing the risk from terrorism. The Unit engages with communities, local authorities, higher education and universities and other local bodies, in order to prevent violent extremism. The Unit also offers specialist protective security advice to locations deemed to be at a greater risk from terrorism.

CTIU are involved in the disruption and detection of terrorist activity and have close links between local police and the communities they serve. They also work at ports and airports alongside UK Visas and Immigration.[13]

Police dogs and their handlers are huge assets to the Force and hold a vitally important role in safeguarding the whole of Sussex. General purpose dogs are one of the most affective means for tracking, chasing and detaining suspects, searching for stolen property and missing people, and assisting public order units with crowd control. Specialist search dogs are used for drug, cash and weapon recovery, for detecting explosives and for following the scent of a specific person. Dog handlers are also trained to deal with dangerous dogs.[14]

The Emergency and Planning Team provides Sussex Police with the ability to plan for major incidents, natural disasters and large policing operations that occur throughout the communities of Sussex. The team delivers specialist equipment to front line officers, staff for operations and tactical advice to Police commanders, this helps to deliver the best service possible to the public during critical times. The team also has responsibilities with regards to business continuity, local resilience partnership working and contingency planning.[14]

The Road Policing Unit (RPU) cover the whole force from four bases. The primary aims of RPU are to deny criminals the use of the road, tackle anti-social driving such as mobile phone use and drink-driving and to bring down the number of KSI (killed and seriously injured) casualties on the roads of Sussex (for figures on the number of casualties, see table at end of page). Vehicles in use include fully marked BMW 530d Touring estates and Landrover Discovery. Ford Galaxys are used by Forensic Collision Investigation teams - these are based at Shoreham Police Station. They also use a number of unmarked vehicles of various types fitted with covert warning equipment. 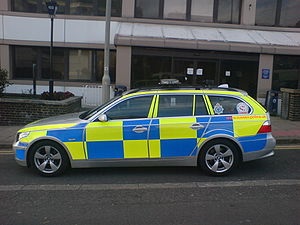 Specialist Search Unit officers search where other police officers cannot go. They are trained to search in demanding environments that need specialist equipment, such as underwater (mostly inland waters), at height, in flooded areas as in the Lewes floods in 2000, and confined spaces. The team are experts in searching for missing people, stolen property, drugs, weapons and firearms, and they are also licensed to find and identify improvised explosive devices. A police boat is used by the unit to undertake marine patrols along the Sussex coastline and during diving operations.[14]

Firearms officers are deployed to incidents involving the use of firearms or other lethal weapons either on a spontaneous or pre-planned basis. They are able to be deployed across all of Sussex, dealing with high priority crime such as drugs, burglary and violent crime. All tactical firearms (TFU) officers are trained in conflict resolution methods, meaning every incident is resolved using the minimum amount of force necessary. Non-lethal methods used by officers include the Baton Gun for firing rubber bullets and the Taser stun-gun. Officers are rigorously trained in threat assessment and perception, ready to make split-second decisions to protect the public against threats of violence officers are required to complete a two-year probationary period as firearms officers at Gatwick Airport after completing initial training.[14]

Sussex Police Authority had 9 councillors (drawn from the three councils), 3 justices of the peace, and 5 independent members. In November 2012, elections were held for the first Police and Crime Commissioner for Sussex who will took office on 22 November 2012. At that point the Police Authority ceased to exist.[15]

Opened on 4 May 2005 by Councillor Pat Drake, the Mayor of Brighton & Hove, the museum is located in the basement of Brighton Town Hall and offers an educational and entertaining insight into the history of policing within Sussex.

It provides an opportunity to visit Brighton Borough main police station for the period 1830 to 1967 and learn about the murder of Chief Constable Henry Solomon in 1844 by a prisoner. It's possible to view the old cells with their graffiti from the Mods and Rockers era, the policeman's wash room and uniform store areas, police memorabilia and artifacts. The Museum also houses a unique collection of truncheons and tipstaffs, one of the largest in the country. This collection was made by Alderman Caffyn throughout his lifetime and is on permanent loan to the Museum from the Sussex Police Authority.[14]

Sussex Police, like many other forces in the UK, have Police Cadets. There are around 200 operational Cadets in Sussex Police. Cadets within the VCC (Volunteer Cadet Corps) often have duties at Police Stations across Sussex. They have a similar uniform to non-operational Police Officers and Police staff which consists of:

Cadets learn many police skills as well as a student officer syllabus in preparation for joining as an officer. They also assist at public events and displays.

Proposals were made by the Home Secretary on 20 March 2006 to merge the force with Surrey Police forming a single strategic police force for Sussex and Surrey.[16] Opposed by both Sussex Police and Surrey Police, the plans were effectively abandoned by the Home Office in July 2006.[17]

In a report published by HM Inspectorate of Constabulary in July 2011,[18] the impact on the number of police officers and staff partly due to the reduction to Sussex Police's budget following the comprehensive spending review is as follows:

In common with other UK forces, Sussex is being forced to save 20% from its budget by 2015. Whilst efforts are being made to minimise the impact of these cuts, inevitably there have been, and continue to be reductions in the numbers of warranted officers and police staff. In September 2010, Chief Constable Martin Richards announced plans to cut up to 1,050 police officers and staff over the following five years, saying that job cuts were inevitable as the force faced estimated budget cuts of £52m by 2015.It was estimated that about 500 of the affected jobs would be police officers.[19]

On 10 May 2012, off-duty officers from Sussex police joined an estimated 30,000 others from around the UK to protest at the cutbacks in a march through London.[20]

Published in March 2012 Sussex Police became the first force in the UK to launch a mobile based app for reporting crime.[22]

A list of officers of Sussex Police and its predecessors who died on duty (in progress) is provide by the national police charity, the Police Roll of Honour Trust.[23]

As well as preventing and detecting crime, Sussex Police have a responsibility to reduce the number of casualties on the roads. Additionally, in her 2012 PCC election manifesto, Katy Bourne said that the biggest issue raised in her Sussex Crime Survey was road safety. "Katy will encourage the police to target accident ‘black spots’ and high risk drivers and continue ‘Operation Crackdown’ to tackle anti-social driving."[24] The following table shows the combined total figures for the number of casualties on the roads of East Sussex, West Sussex, and Brighton and Hove for the most recent five years for which data is available.[25][26][27][28][29][30]