Suzanne Curchod (1737 – 6 May 1794) was a French-Swiss salonist and writer. She hosted one of the most celebrated salons of the Ancien Régime. She was the wife of French finance minister Jacques Necker, and is often referenced in historical documents as Madame Necker.

Born in May 1737,[1] Churchod was the daughter of Louis Antoine Curchod, Protestant pastor of the Swiss village of Crassier near Lausanne, and Magdelaine d'Albert de Nasse.[2] The family was of modest means, but Suzanne was well educated (largely by her father), becoming fluent in Latin and showing aptitude for mathematics and science.[2] Her first salon was a literary group called the Académie des Eaux comprising a circle of Lausanne-based students with Churchod as president.[2]

In 1757 Churchod met the historian Edward Gibbon, who fell in love with her, writing in a later recollection of their courtship that he "found her learned without pedantry, lively in conversation, pure in sentiment, and elegant in manners."[2] He wished to marry her, but paternal disapproval on both sides, Gibbon's own wavering, and Suzanne's refusal to leave Switzerland for England thwarted their plans.[2][3] Gibbon broke off the engagement in 1762, an event that fell in between the deaths of Churchod's parents in 1760 and 1763.[2]

With the loss of income resulting from the death of her father, Churchod and her mother were left very poor, a situation she coped with by giving lessons.[2] After her mother died, she became a companion to a young French widow, Madame de Vermenoux, who took her to Paris around 1763 or 1764.[2] At the time, Madame de Vermenoux was being courted by the ambitious Swiss financier Jacques Necker but was uncertain whether she wanted to remarry at all.[2] Within a few months, however, Necker turned his attention to Churchod, and in 1764 the two were married. They had one child, a daughter named Anne Louise Germaine, the future writer and philosopher now better known as Madame de Staël. 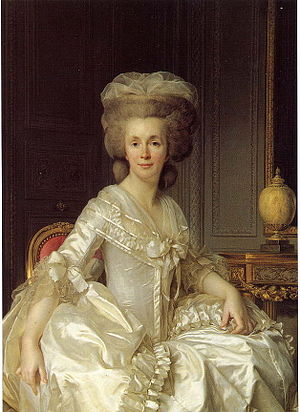 In 1776, Madame Necker's husband became Controller-General of Finances, head of the French finance ministry under King Louis XVI, a position he gained in spite of the double disadvantage of his Protestant religion and Swiss origins.[3] He owed much of his success to his wife's salon, where the luminaries of Parisian society gathered to discuss art, literature, and politics. Among the regular visitors were Jean-François Marmontel, Jean-François de La Harpe, the Comte de Buffon, the Baron von Grimm, Gabriel Bonnot de Mably, Jacques-Henri Bernardin de Saint-Pierre, Antoine Léonard Thomas, and the compilers of the Encyclopédie including Denis Diderot and Jean le Rond d'Alembert.[2][3] Madame Necker's salons were also a meeting place for Swiss expatriates such as Marie Thérèse Rodet Geoffrin and Marie Anne de Vichy-Chamrond, marquise du Deffand. It was at one of Madame Necker's dinners that a group of men of letters first proposed starting a subscription to pay for a statue of Voltaire by the sculptor Jean-Baptiste Pigalle. His statue of a nude Voltaire was finished in 1776 and is now in the Louvre.[2] Madame Necker carried on an extensive correspondence with Grimm, Buffon, Thomas, Marmontel, and others of these men of letters, especially when they were away from Paris.

The time commitment involved in running a salon, combined with her husband's dislike of bluestocking authors, prevented Madame Necker from pursuing her interest in writing to the extent she desired. Her surviving writings are few: a memoir about the establishment of hospitals (Mémoire sur l'Etablissement des hospices, 1786) and some reflections on divorce (Réflexions sur le divorce, 1794). She devoted considerable time to ensuring that their daughter Germaine received the very best education possible. She also founded a hospital in Paris in 1784, the Necker-Enfants Malades Hospital, which is still extant and treats sick children.

Jacques Necker fell from power in 1789 and was dismissed from the ministry.[2] The following year, the Neckers left Paris and returned to Switzerland. Madame Necker died at Beaulieu Castle in Lausanne in 1794.