From Infogalactic: the planetary knowledge core
Jump to: navigation, search
Not to be confused with Tackle (gridiron football position). 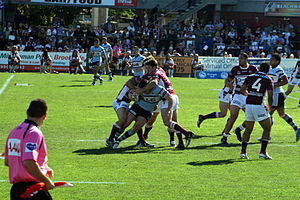 Most forms of football have a move known as a tackle. The primary and important purposes of tackling are to dispossess an opponent of the ball, to stop the player from gaining ground towards goal or to stop them from carrying out what they intend.

The word is used in some contact variations of football to describe the act of physically holding or wrestling a player to the ground. In others, it simply describes one or more methods of contesting for possession of the ball. It can therefore be used as both a defensive or attacking move.

In Middle Dutch, the verb tacken meant to grab or to handle. By the 14th century, this had come to be used for the equipment used for fishing, referring to the rod and reel, etc., and also for that used in sailing, referring to rigging, equipment, or gear used on ships. By the 18th century, a similar use was applied to harnesses or equipment used with horses. Modern use in football comes from the earlier sport of rugby, where the word was used in the 19th century. 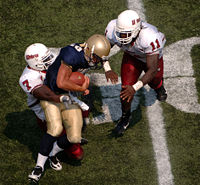 In American football and Canadian football, to tackle is to physically interfere with the forward progress of a player in possession of the ball, such that his forward progress ceases and is not resumed, or such that he is caused to touch some part of his body to the ground other than his feet or hands, or such that he is forced to go out of bounds. In any such case, the ball becomes dead, the down is over, and play ceases until the beginning of the next play. A tackle is known as a quarterback sack when the quarterback is tackled behind the line of scrimmage while attempting to throw a pass. A tackle for loss indicates a tackle that causes a loss of yardage for the opposing running back or wide receiver. This happens when the quarterback is sacked, when either a rusher or a receiver is tackled behind the line of scrimmage, or when the ball is fumbled behind the line of scrimmage only to be picked up by an offensive player who does not manage to move past the line before being tackled. When a player who does not have the ball is taken down it is generally referred to as a block. Tacklers are not required to wrap their arms around the ball carrier before bringing him to the ground; in fact, the ball carrier is often "tackled" by the defender taking a running start and hitting the ball carrier to knock them to the ground. Tackles can also be made by grabbing the ball carrier's jersey and pulling him to the ground. As mentioned above, the referee can declare that a play is dead if the ballcarrier's forward progress has been stopped, even if no actual "tackle" has occurred.

There are some restrictions on tackles and blocks. At no time may a defensive player tackle an offensive player by grabbing the facemask of a football helmet; doing so incurs a 15-yard penalty and the victimized team is awarded a new set of downs. Although spear tackles are allowed in gridiron football, a player may not use his helmet to tackle an opponent as the technique can cause serious injury to both players (more often the tackler, due to the force of reaction on the tackler, which is apt to be beyond the limit that the neck can handle) and also warrants a 15-yard penalty as well as a fresh set of downs if committed by the defending team; this is known as "spearing the player." A similar penalty is assessed to any player attempting to make contact with his helmet against another opponent's helmet, which is known as a helmet-to-helmet collision. Grabbing a ball carrier by the pads behind his neck and pulling him down is known as a "horse collar," a method which has been made illegal at all levels of American football.

It is also illegal to tackle a player who has thrown a forward pass (generally a quarterback) after he has released the ball; doing so is called "roughing the passer" and incurs a 15-yard penalty and a fresh set of downs for the team with the ball. However, in the NFL a player can continue forward for one step, which means that often a player who is committed to attacking the quarterback will still make a tackle. Place kickers and punters are afforded an even greater protection from being tackled. Once the play is ruled complete no contact is permitted; a player who makes contact with an opponent after the play is charged with "unnecessary roughness" and his team is assessed a 15-yard penalty. Blocks that occur in the back of the legs and below the knees, initiated below the waist, or clotheslines are also generally prohibited and players who use them are subject to much more severe penalties than other illegal tackles. However a player who plays on the line can block below the knees (cut block) as long the block is within five yards of the line and the player they block is in front of them and not engaged by another blocker (chop block).

In the National Football League (NFL), tackles are tracked as an unofficial statistic by a scorekeeper hired by the home team. Though the statistic is widely cited, the league does not verify that the counts are accurate.[1] 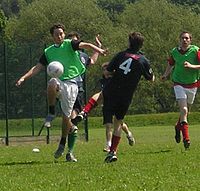 A tackle in Association football 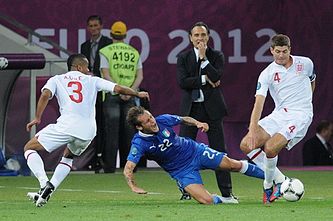 In association football, a player tackles an opponent by taking control of the ball from them. This is achieved by using either leg to wrest possession from the opponent, or sliding in on the grass to knock the ball away. The target of the tackle must always be the ball, otherwise it may be deemed as illegal by the referee, especially if the player makes contact with his opponent before the ball, or makes unfair contact with the player after playing the ball. If the tackle succeeds in touching the ball first a player may still be penalised. Tackling with both legs is illegal if the tackle is careless, reckless or made with excessive force.,[2] and tackles that involve lunging at an opponent with both legs, regardless of whether the ball is won, are generally considered to constitute serious foul play and hence result in a sending-off.[3] Although tackles from behind were formerly illegal, tackles can now be legally made from any direction, so long as contact with the ball is made and the tackle is not excessively dangerous.[4] This explicitly includes "scissoring" (tackling with legs apart, so as to trap the opponent's leg or legs in between), which is likely to be punished with a send-off (red card), as it poses a high risk of severe knee injury to the player being tackled.

Tackling with studs up is considered dangerous.[5] A studs up tackle is made when a player lunges into a tackle with a leg or both legs outstretched exposing the soles of their boots. Referees are encouraged to at the very least caution (yellow card) players who commit such challenges.[6] 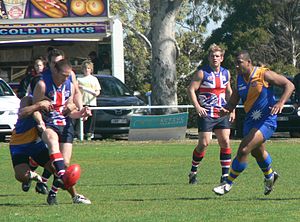 A British Bulldog player is chased down and tackled by a Nauru Chief opponent as he tries to get a kick away.

As there is no offside rule in Australian rules football, players can be tackled from any direction, and often blindsided. For this reason, the sport allows shepherding methods for teammates to be able to protect the ball carrier.

The variety of different ways to contest possession in Australian rules has led to first time observers of the game regarding it as having "no rules" or as some Australians unfamiliar with the game colloquially term it "Rafferty's Rules". Despite these stereotypes, however, there are actually quite strict rules governing tackling.

In Australian rules football, the move commonly described as a "tackle" is similar to in rugby and involves wrapping, holding or wrestling a player who has possession of the ball to the ground.

Tackling in Australian Rules is unique in that if tackled player does not dispose of the ball having had opportunity to do so (called the holding the ball rule), or concedes a penalty in the tackle (i.e. tries to throw the ball when he was only allowed to "handball" or kick it) the tackler is rewarded with a free kick. This is only paid if the player tackling does not either deliberately or unintentionally hold the ball to their opponents body.

A tackle must make contact below the shoulders and above the knees, and a player is able to be thrown to the ground, so long as the tackle is not reckless. There are also rules outlawing pushing in the back making tackling more difficult.

Players wear little to no padding to cushion the impact of tackles, however mouthguards are essential for keeping teeth. As there is no offside rule in Australian rules, tackling is more often when chasing a player down rather than frequent on head on contact.

Types of tackles in Australian rules

There are many types of tackles in Australian rules football:

Although the term "tackle" is used in Australian Rules to exclusively describe wrapping, holding or wrestling a player in possession, there are also several other ways of contesting possession in Australian rules that other sports would describe as a "tackle" and that also involve a degree of contact.

Other defensive actions are generally categorised as one percenters. Colliding with other players whilst trying to catch or mark the ball is part of the game, however tackling a player jumping in the air to catch a ball is strictly not allowed. Bumping a player who is jumping to catch the ball is not allowed unless the player is deemed to have intentions to contest for possession or have "eyes for the ball". The defensive tactic of punching away (commonly known as spoiling) from a player is allowed. Smothering, which involves using the arms or body to get in the way of an opponent's kick as it leaves their boot, and is similar to a charge down in rugby football.

Gaelic football defines tackling as wresting the ball from an opponent's hands. Bumping is allowed on the player with the ball, but a player cannot be grabbed.

See also: One on one tackle

A tackle in rugby league

In rugby league the ball-carrier only may be tackled by any number of defenders from any direction. The initial contact in the tackle must be made below the ball carrier's neck or it will be deemed a high tackle and penalised. A tackle in rugby league is completed when any of the following occurs:[9]

Once the tackle is completed, the ball-carrier must be allowed to get to his feet to 'play-the-ball'. Spear tackles are illegal in rugby league, with most tackles in which the defender is lifted 'above the horizontal' bringing about penalties in the modern game. A 2012 New Zealand study found that over 659 tackles are made per game in professional rugby league.[10] Of all the rugby league positions, second-row forward averages the most tackles.[11] 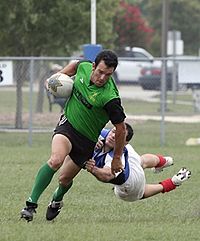 A diving tackle in rugby union

In rugby union, a player must be brought to ground for a tackle to be completed. The tackled player must release the ball, but the ball is not dead and a ruck forms to contest possession of it. If the ball carrier is not brought to the ground a maul will usually form.

Other non-football games that feature tackling or similar concepts include British bulldogs, hurling, hockey and shinty.

Some illegal tackle moves result in a penalty play, however others may be "reportable" offences - that is, the option exists for an official to penalise a player's conduct individually rather than during the game refer it to a tribunal for deferred penalty.