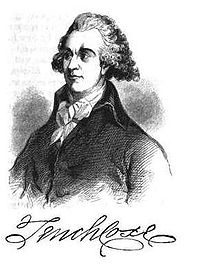 Tench Coxe (May 22, 1755 – July 17, 1824) was an American political economist and a delegate for Pennsylvania to the Continental Congress in 1788-1789. He wrote under the pseudonym "A Pennsylvanian," and was known to his political enemies as "Mr. Facing Bothways."

Coxe was born in Philadelphia, Pennsylvania on May 22, 1755. His mother was a daughter of Tench Francis, Sr. His father came of a family well known in American affairs. His great-grandfather was the governor of West Jersey, Dr. Daniel Coxe.

Tench received his education in the Philadelphia schools and intended to study law, but his father determined to make him a merchant, and he was placed in the counting-house of Coxe & Furman, becoming a partner at the age of twenty-one.[1]

After Patriots took power, Coxe left Philadelphia for a few months, only to return when British General Howe occupied the city in September 1777. Coxe remained in Philadelphia after the British departed in 1778, and some Patriots accused him of having Royalist sympathies and of having served (briefly) in the British army. Coxe's trading successes during the period of British occupation lent considerable support to the charges, and he was arrested; although nothing ever came of the allegations and he was pardoned. The Pennsylvania militia records of 1780, 1787, and 1788 listed Coxe as a militia private.

Coxe became a Whig, and began a long political career. In 1786 he was sent to the Annapolis Convention, and in 1788 to the Continental Congress.[1]

Coxe next became a Federalist.[1][2] A proponent of industrialization during the early years of the United States, Coxe co-authored the famous Report on Manufactures (1791) with Alexander Hamilton and provided much of the statistical data. He had been appointed Assistant Secretary of the Treasury on September 11, 1789 under Alexander Hamilton when Hamilton was Secretary of the Treasury. Coxe also headed a group called the Manufacturing Society of Philadelphia. He was appointed revenue commissioner by President George Washington on June 30, 1792, and served until removed by President John Adams.

Coxe then turned Democratic-Republican, and in the canvass of 1800 published Adams's famous letter to him regarding Pinckney. For this he was reviled by the federalists as a renegade, a tory, and a British guide, and was rewarded by President Thomas Jefferson with an appointment as purveyor of public supplies and served from 1803 to 1812.[1]

In 1804 Coxe organized and led a group at Philadelphia opposed to the election to congress of Michael Leib, and this brought him again into public notice. Though a Democratic-Republican, he was for three months daily abused by the Aurora. He was called a tory, a Federal rat, a British guide who had entered Philadelphia in 1777 with laurel in his hat, and his group was nicknamed the “quids.” The term is commonly supposed to have been first applied to the little band led by John Randolph in 1806, but this is a mistake.[1]

Coxe was a writer on political and economic subjects and a champion of the use of tariffs to protect the new nation's growing industries. He wrote also on naval power, on encouragement of arts and manufactures, on the cost, trade, and manufacture of cotton, on the navigation act, and on arts and manufactures in the United States. He deserves, indeed, to be called the father of the American cotton industry. He was the first to attempt to bring an Arkwright machine to the United States, the first urged the people of the South to give their time to raising cotton.[1]