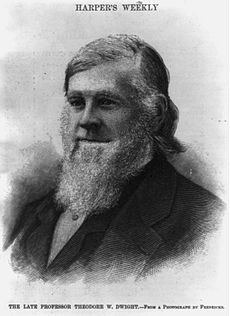 His father was Benjamin Woolsey Dwight (1780–1850), a physician and merchant, and his grandfather was Timothy Dwight IV (1752–1817), a prominent theologian, educator, author, and president of Yale University from 1795-1817. Theodore Dwight graduated from Hamilton College in 1840 where he studied physics under Samuel F.B. Morse and John William Draper.

Dwight taught the classics at Utica Academy in 1840–1841. He studied law at Yale and was admitted to the bar in 1845. Between 1842-1858, he taught at Hamilton, first as tutor and later as professor of law, history, civil polity, and political economy. In 1853 he became dean of the Hamilton Law School.

At Columbia, Dwight was the creator of the Dwight method of legal instruction, which emphasized memorization of treatises, practice drills, and frequent moot courts. The Dwight method was in competition with the case method developed by Christopher Columbus Langdell, then Dean of Harvard, which emphasized the study of individual cases, and inductive reasoning. As described by Columbia Professor Peter Strauss, "Where Dwight aimed to give a sound knowledge of the law to men of average ability, Harvard's case method aimed to give as much intellectual stimulation as possible to those who would become the profession's elite." Today, the more abstract case method dominates legal education, even at New York Law School. However, the Dwight method, while not described as such, is still used in some law schools. Dwight-like memorization techniques are also widely used to prepare for state bar exams.

Dwight was also a prominent figure in political and social reforms. In 1873, Governor John Dix appointed Dwight a member of the commission of appeals, which in 1874–1875 aided the New York Court of Appeals to clear its docket. In 1886 he served as counsel for five Andover Theological Seminary professors charged with heresy. Dwight was particularly interested in prison reform; he collaborated on A Report on Prisons and Reformatories in the United States and Canada (1867), served as president of the New York Prison Association, and was a delegate to the International Prison Congress at Stockholm in 1878. He helped draw up the bill for the establishment of the Elmira Reformatory and wrote an early report that helped lead to the organization the State Charities Aid Association.

Dwight edited Sir Henry Maine's Ancient Law;[1] was associate editor of the American Law Register and legal editor of Johnson's Cyclopaedia; and published Charitable Uses: Argument in the Rose Will Case (1863). He was a non-resident professor of law at Cornell (1869–1871) and at Amherst (1870–1872).

Dwight died in Clinton, New York, on June 18, 1892. He died while in the act of signing his will.[2] Because he had not finished writing his signature by the time he died, the will was not enforced.[3]