Between his two White House stints, Snow was a broadcaster and newspaper columnist. After years of regular guest-hosting for The Rush Limbaugh Show and providing news commentary for National Public Radio, he launched his own talk radio program, The Tony Snow Show, which went on to become nationally syndicated. He was also a regular personality on Fox News Channel since 1996, hosting Fox News Sunday and Weekend Live, and often substituting as host of The O'Reilly Factor. In April 2008, Snow briefly joined CNN as a commentator.[1] He also made several notable speeches, including keynote addresses at the Conservative Political Action Conference in 2007 and 2008.

In his journalistic and governmental capacities, Snow generally supported conservative causes.[2][3] He died of colon cancer on July 12, 2008.

Snow was born in Berea, Kentucky, and raised in Cincinnati, Ohio. His father, Jim, taught social studies, was a school guidance counselor, and an assistant principal at Princeton High School in Sharonville, Ohio (a suburb of Cincinnati) from which his son graduated. His mother was an inner-city nurse who died of colon cancer in 1973 when Snow was 17 years old. Snow developed an early interest in journalism, public policy and politics that resulted in his selection as editor of the high school newspaper.

Snow originally registered to vote as a Democrat in Ohio. After graduating from Princeton High School in 1973,[4] Snow obtained his Bachelor of Arts in philosophy from Davidson College in 1977. Snow was passionate about science and taught physics to high school students. He also attended graduate programs in philosophy and economics at the University of Chicago.[5]

Snow was an avid musician. He played the trombone, flute, piccolo, saxophone and guitar,[6][7][8][9] and belonged to a cover band, Beats Workin', which featured fellow Washington-area professionals. Beats Workin' played publicly with a number of rock bands, including Snow's friends Skunk Baxter (The Doobie Brothers, Steely Dan) and Ian Anderson of Jethro Tull. He was featured on an episode of VH1 Classic's Rock 'n Roll Fantasy Camp.[10]

Snow also wrote a syndicated column for Creators Syndicate between 1993 and 2000. As a nationally syndicated columnist, his commentaries appeared in more than 200 newspapers nationwide. Snow won numerous awards during his print career, including citations from the Virginia Press Association, the Detroit Press Club, the Society of Professional Journalists, the American Society of Newspaper Editors, The Associated Press and Gannett.

He appeared on radio and television programs worldwide including The McLaughlin Group, The MacNeil–Lehrer NewsHour, Face the Nation, Crossfire, and Good Morning America. Until 1994, Snow was the writer, correspondent and host of the PBS news special The New Militant Center.

From 1996 to 2003, he served as the first host of FOX News Sunday, a Sunday morning interview and roundtable program produced by Fox News, airing on affiliates of the Fox Broadcasting Company and later in the day on Fox News Channel.

Snow served as the primary guest host of Rush Limbaugh's program from the mid-1990s on. He was also a frequent commentator on National Public Radio. Snow's own Tony Snow Show on Fox News Radio premiered in late 2003. It ended when he became White House Press Secretary in April 2006. 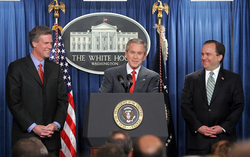 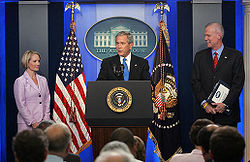 Return to the White House

His selection as press secretary was initially criticized because of some of his past comments about Bush.[11] Bush acknowledged Snow's prior criticisms during the announcement of his appointment, stating that Snow was "not afraid to express his own opinions".[12] Snow began his new press secretary duties on May 8, 2006. Snow decided to leave the position of press secretary after new White House Chief of Staff Josh Bolten asked all staff members to either commit to staying through the end of Bush's second term or leave by Labor Day of 2007.[13] On September 13, 2007, Tony Snow gave his final press briefing, and there admitted that he would miss the duties of his position. He confessed to all in attendance, "I love these briefings".[14] Seven years earlier, in 2001, in much of the same spirit, Tony Snow expressed the following:

"The White House, with all its pressures, intrigues, triumphs, betrayals, joys and disappointments, is the most special place you ever will work. Look out the gates at the people who slow their gait as they pass, trying to get a glimpse of someone—anyone. They know what you're likely to forget. You're blessed... Leave no room for regrets, for someday, in the not-so-distant future, you will be back where you started: on the sidewalk with the other folks, gawking at that grand, glorious, mysterious place where Lincoln walks at night; and our highest hopes and dreams reside."[15]

In February 2005, while still at Fox News, Snow was diagnosed with colon cancer. He returned to broadcasting in April 2005 after having surgery.[16][17] On March 23, 2007, after almost a year as press secretary, Snow once again took a leave of absence to seek treatment for recurrent cancer.[18][19][20][21] Treatment for the spreading cancer in his final few months forced periodic absences from Snow's duties as press secretary, his subsequent position as a CNN commentator, and his public speaking engagements.[22][23] In the early morning of July 12, 2008, Snow died at Georgetown University Hospital as a result of colon cancer that had spread to his liver.[24] Reacting to Snow's death, President George W. Bush praised Snow's ability to bring "a certain civility to this very contentious job."[13] He was 53 years old. Snow's body was later cremated.