Traianos Dellas (Greek: Τραϊανός Δέλλας, born on 31 January 1976 in Thessaloniki, Greece) is a Greek football manager and former player. He was an integral part of Greece's Euro 2004 winning squad, during which he became the only player to score a silver goal in an international football match.

Dellas got his start with Greek side Aris for two years, where he helped the Hellenic football club of Thessaloniki to qualify for the UEFA Cup. He played together with Fanis Katergiannakis in 2004 when they won Euro 2004 with the Greek national team in Portugal.

In the summer 1995 Dellas moved on loan for one year to Panserraikos.

He then returned to Aris again before joining Sheffield United in England. Dellas is best remembered by Sheffield United fans for a game against Tranmere Rovers in March 1999. With United 2–0 down, Dellas came on as a substitute and scored twice as they won 3–2.[1] His only other Blades goal was an amazing 30-yard strike in a home game against Portsmouth which was also a late winner.[2]

He returned to Greece with AEK, where he won the Greek Cup with the club of Athens, with big players like Demis Nikolaidis and Vassilios Tsiartas, gain the second place in the Greek Superleague.

After this great performance, Dellas signed for the Italian club, Perugia F.C.. However, Dellas was dropped from Perugia's first team after a disagreement over his contract and he did not make a single appearance in the last six months of the season, playing only eight matches overall.

After leaving the club Dellas caught the attention of Serie A outfit AS Roma and he joined the team on a free transfer in 2002.[3] After finally establishing himself as a starter following the move of coach Fabio Capello to Juventus, Dellas's play was outstanding. He earned the peculiar honour of being one of only three players (including playmaker Francesco Totti and striker Vincenzo Montella) who were not consistently booed by the fans during training and games during Roma's disastrous 2004–05 season. After failing to renew his contract with the club, Dellas became a free agent. He would eventually miss nearly 8 months of football due to back and hernia injuries and thus, expected offers from the big clubs of Europe failed to materialize.

In the summer of 2005 Dellas decided to return to Greece, joining old team AEK, where he rejoined his former teammate and good friend Demis Nikolaidis.[4] He renewed his contract in June 2007 for a further two years and became team captain. Here Dellas played with big stars like Rivaldo, Pantelis Kafes and the new Greek talent Sokratis Papastathopoulos. On 23 July 2008, Dellas and AEK agreed to terminate his contract by mutual consent after failing to agree on a new contract.[5]

On 24 July 2008 agreed to sign a two-year deal with Cypriot football club Anorthosis Famagusta.[6] Dellas helped the team in Champions League in the season 2008–09, in the same group of Panathinaikos F.C. and Inter Milan of José Mourinho.

On 5 June 2010, Dellas agreed to sign with AEK Athens again, this time for one year, possibly intending to end his career at the team he supports. Dellas formed a partnership at AEK Athens with Pantelis Kafes, reuniting a partnership that helped to win Euro 2004 with Greece. On 12 December 2010, Dellas scored his first goal in the Greek championship after two years' absence, against AEL Larissa of Nikos Dabizas and Stylianos Venetidis that also they won Euro 2004 with Greece. On 30 April 2011, Traianos Dellas won with AEK his second Greek Cup. On 26 May 2012, Dellas announced his retirement from professional football.[7] 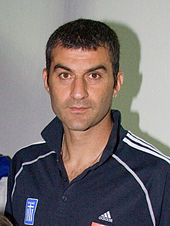 Dellas with the Greece national team.

Dellas earned his first cap for Greece in April 2001 in a 2–2 draw with Croatia. Dellas had an exceptional tournament at Euro 2004, partnering Michalis Kapsis in the centre of what became an almost impenetrable Greek defence, leading to him being voted onto the tournament all-star squad. During the semi-finals, he scored the last and only silver goal ever in the last minute of first half of extra time against the Czech Republic, allowing Greece to progress to the final.[8] This was his first and only goal for the Greek squad.
The coach of Greece called him 'the Colossus of Rhodes' in respect of his performances in the tournament and the moniker is now widely used in the press.[9] After Euro 2004, Dellas continued to be the heart of the Greek defense, but missed nearly eight months in 2005 due to injury. His absence was seen as a major factor in Greece's failed 2006 FIFA World Cup qualifying campaign. Two years later, Dellas helped Greece qualify for Euro 2008 but could not find his form of 2004 as Greece exited the group stage without any points and having scored just one goal. He was also part of the 2010 FIFA World Cup qualifying campaign but was not called up after the victory over Israel on 1 April 2009. Subsequently, he was not included in the provisional squad for the 2010 FIFA World Cup.

On 4 April 2013 Traianos was appointed as AEK Athens's new coach, replacing Ewald Lienen, Akis Zikos being appointed as assistant manager.[10] Following AEK's relegation from the Greek Superleague, Dellas will continue to manage the team in Football League 2 Greece's third tier football division, instead of the second tier in order to clear the team's debts. On 20 October 2015, Dellas resigned as the AEK Athens manager after a heavy loss (4-0) to Olympiacos.

Dellas married Greek model Gogo Mastrokosta on 11 September 2008.[11] They have one daughter.