Tukaram was a 17th-century poet-saint of the Bhakti movement in Maharashtra.[2][4] He was part of the egalitarian, personalized Varkari devotionalism tradition.[5]

Tukaram is known for his Abhanga devotional poetry and community-oriented worship with spiritual songs known as kirtans.[5] His poetry was devoted to Vitthala or Vithoba, an avatar of Hindu god Vishnu.[4]

He is also referred to as Saint Tukaram, Bhakta Tukaram, Tukaram Maharaj, Tukoba and Tukobaraya.[6]

The year of birth and death of Tukaram has been a subject of research and dispute among 20th-century scholars.[7][8] He was either born in the year 1598 or 1608 in a village named Dehu, near Puṇe in Mahārāshtra, India.[2][8]

Tukaram was born to Kanakar and Bolhoba More, and scholars[4][9][8] consider his family to belong to the Kunbi (Shudra) caste. Despite being from a caste traditionally believed to be the laborers and tilling service providers, Tukaram's family owned a retailing and money-lending business as well as were engaged in agriculture and trade.[4][8] His parents were devotees of Vithoba, an avatar of Hindu deity Vishnu (Vaishnavas). Both his parents died when Tukaram was a teenager.[8]

Tukaram's first wife was Rakhama Bai, and they had a son named Santu.[10] However, both his son and wife starved to death in the famine of 1630-1632.[4][11] The deaths and widespread poverty had a profound effect on Tukaram, who became contemplative, meditating on the hills of Sahyadri range (Western Ghats) in Maharashtra, and later wrote he "had discussions with my own self".[4][10] Tukaram married again, and his second wife was Avalai Jija Bai.[4][10] He spent most of his later years in devotional worship, community kirtans (group prayers with singing) and composing Abhanga poetry.[4][10]

According to Ranade, Tukaram's spiritual teacher was Babaji Chaitanya, who himself was fourth generation disciple of the 13th-century scholar Jnanadeva.[12][13] In his work of Abhangas, Tukarama repeatedly refers to four other persons who had a primary influence on his spiritual development, namely the earlier Bhakti sants Namdev, Jnanadeva, Kabir and Eknath.[14]

According to some scholars, Tukaram met Shivaji – a major political leader who resisted the Mughal Empire and founded the Maratha kingdom; Tukaram introduced Shivaji to Ramdas for his spiritual education.[4][10][15] Their continued interaction is the subject of legends.[15][16] Eleanor Zelliot states Bhakti movement poets including Tukaram were influential in Shivaji's rise to power.[13]

I could not lie anymore,
so I started to call my dog "God".

First he looked confused,
then he started smiling, then he even danced.

I kept at it, now he doesn't even bite,
I am wondering if this might work on people.

Tukaram's work is known for informal verses of rapturous abandon in folksy style, composed in vernacular language, in contrast to his contemporaries such as Dnyandeva known for combining similar depth of thought with a grace of style.[19]

In one of his poems, Tukaram self-effacingly described himself as a "fool, confused, lost, liking solitude because I am wearied of the world, worshipping Vitthal (Vishnu) just like my ancestors were doing but I lack their faith and devotion, and there is nothing holy about me".[20]

Tukaram Gatha is a Marathi language compilation of his works, likely composed between 1632 to 1650.[19] Also called Abhanga Gatha, the Indian tradition believes it includes some 4,500 abhangas, but modern scholars have questioned the authenticity of most of them.[19] The poems considered authentic cover a wide range of human emotions and life experiences, some autobiographical, and places them in a spiritual context.[19] He includes a discussion about the conflict between Pravritti – having passion for life, family, business, and Nivritti – the desire to renounce, leave everything behind for individual liberation, moksha.[19]

Numerous inconsistent manuscripts of Tukaram Gatha are known, and scholars doubt that most of the poems attributed to Tukaram are authentic.[19] Of all manuscripts so far discovered, four are most studied and labelled as: the Dehu MS, the Kadusa MS, the Talegeon MS and the Pandharpur MS.[22] Of these, the Dehu MS is most referred to because Indian tradition asserts that it is based on the writing of Tukaram's son Mahadeva, but there is no historical evidence that this is true.[22]

The first compilation of Tukaram poems were published, in modern format, by Indu Prakash publishers in 1869, subsidized by the British colonial government's Bombay Presidency.[22] The 1869 edition noted, "some of the [as received] manuscripts on which the compilation relied, had been 'corrected', 'further corrected' and 'arranged'."[22] This doctoring and rewriting over about 200 years, after Tukaram's death, has raised questions whether modern compilation of Tukaram's poems faithfully represent what Tukaram actually thought and said, and the historicity of the document. The known manuscripts are jumbled, randomly scattered collections, without chronological sequence, and each contain some poems that are not found in all other known manuscripts.[23]

Early 20th-century scholars on Tukaram considered his teachings to be Vedanta-based but lacking a systematic theme. Edwards wrote,

Tukaram is never systematic in his psychology, his theology, or his theodicy. He oscillates between a Dvaitist [Vedanta] and an Advaitist view of God and the world, leaning now to a pantheistic scheme of things, now to a distinctly Providential, and he does not harmonize them. He says little about cosmogony, and according to him, God realizes Himself in the devotion of His worshippers. Likewise, faith is essential to their realization of Him: 'It is our faith that makes thee a god', he says boldly to his Vithoba.

Late 20th-century scholarship of Tukaram, and translations of his Abhanga poem, affirm his pantheistic Vedantic view.[25] Tukaram's Abhanga 2877, as translated by Ranade states, for example, "The Vedanta has said that the whole universe is filled by God. All sciences have proclaimed that God has filled the whole world. The Puranas have unmistakably taught the universal immanence of God. The saints have told us that the world is filled by God. Tuka indeed is playing in the world uncontaminated by it like the Sun which stands absolutely transcendent".[25]

When salt is dissolved in water, what is it that remains distinct?
I have thus become one in joy with thee [Vithoba, God] and have lost myself in thee.
When fire and camphor are brought together, is there any black remnant left?
Tuka says, thou and I are one light.

However, scholars also note that other Abhangas attributed to Tukaram criticize monism, and favor dualistic Vedanta philosophy of the Indian philosophers Madhvacharya and Ramanuja.[26] In Abhanga 1471, according to Bhandarkar's translation, Tukaram says, "When monism is expounded without faith and love, the expounder as well as the hearer are troubled and afflicted. He who calls himself Brahma and goes on in his usual way, should not be spoken to and is a buffoon. The shameless one who speaks heresy in opposition to the Vedas is an object of scorn among holy men."[26]

The controversy about Tukaram's true philosophical positions has been complicated by questions of authenticity of poems attributed to him, discovery of manuscripts with vastly different number of his Abhang poems, and that Tukaram did not write the poems himself, they were written down much later, by others from memory.[28]

Tukaram encouraged kirtan as a music imbued, community-oriented group singing and dancing form of bhakti.[5] He considered kirtan not just a means to learn about Bhakti, but Bhakti itself.[5] The greatest merit in kirtan, according to Tukaram, is it being not only a spiritual path for the devotee, it helps create a spiritual path for others.[5]

Tukaram accepted disciples and devotees without discriminating gender. One of his celebrated devotees was Bahina Bai, a Brahmin woman, who faced anger and abuse of her husband when she chose Bhakti marga and Tukaram as her guru.[30]

Tukaram taught, states Ranade,[31] that "pride of caste never made any man holy", "the Vedas and Shastras have said that for the service of God, castes do not matter", "castes do not matter, it is God's name that matters", and "an outcast who loves the Name of God is verily a Brahmin; in him have tranquility, forbearance, compassion and courage made their home".[31] However, early 20th century scholars questioned whether Tukaram himself observed caste when his daughters from his second wife married men of their own caste.[32] Fraser and Edwards, in their 1921 review of Tukaram, stated that this is not necessarily so, because people in the West too generally prefer relatives to marry those of their own economic and social strata.[32]

David Lorenzen states that the acceptance, efforts and reform role of Tukaram in the Varakari-sampraday follows the diverse caste and gender distributions found in Bhakti movements across India.[33] Tukaram, of Shudra varna, was one of the nine non-Brahmins, of the twenty one considered saints in Varakari-sampraday tradition.[33] The rest include ten Brahmins and two whose caste origins are unknown.[33] Of the twenty one, four women are celebrated as sants, born in two Brahmin and two non-Brahmin families. Tukaram's effort at social reforms within Varakari-sampraday must be viewed in this historical context and as part of the overall movement, states Lorenzen.[33] 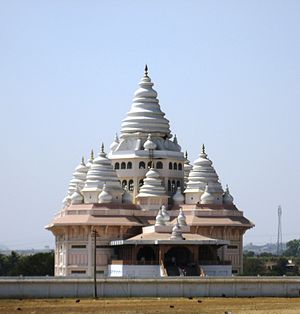 Gatha temple in Dehu, near Pune Maharashtra, is one of two local temples that mark the legacy of Tukaram. His poetry is carved on its wall.[34]

Tukaram was a devotee of Vitthala or Vithoba, an avatar of God Vishnu, synchronous with Krishna but with regional style and features.[13] Tukaram's literary works, along with those of sants Dnyandev, Namdev and Eknath, states Mohan Lal, are credited to have propelled Varkari tradition into pan-Indian Bhakti literature.[35]

According to Richard Eaton, from early 14th-century when Maharashtra region came under the rule of the Islamic Delhi Sultanate, down to the 17th-century, the legacy of Tukaram and his poet-predecessors, "gave voice to a deep-rooted collective identity among Marathi-speakers".[36] Dilip Chitre summarizes the legacy of Tukaram and Bhakti poets, during this period of Hindu-Muslim wars, as transforming "language of shared religion, and religion a shared language. It is they who helped to bind the Marathas together against the Mughals on the basis not of any religious ideology but of a territorial cultural identity".[37]

Mahatma Gandhi, in early 20th century, while under arrest in Yerwada Central Jail by the British colonial government for his non-violent movement, read and translated Tukaram's poetry along with Upanishads, Bhagavad Gita and poems by other Bhakti movement poet-saints.[38]

Saintliness is not to be purchased in shops,
nor is it to be had for wandering, nor in cupboards, nor in deserts, nor in forests.
It is not obtainable for a heap of riches. It is not in the heavens above, nor in the entrails of the earth below.
Tuka says: It is a life's bargain, and if you will not give your life to possess it, better be silent.

The essence of the endless Vedas is this: Seek the shelter of God and repeat His name with all thy heart.
The result of the cogitations of all the Shastras is also the same.
Tuka says: The burden of the eighteen Puranas is also identical.

Merit consists in doing good to others, sin in doing harm to others. There is no other pair comparable to this.
Truth is the only freedom; untruth is bondage, there is no secret like this.
God's name on one's lips is itself salvation, disregarding the name is perdition.
Companionship of the good is the only heaven, indifference is hell.
Tuka says: It is thus clear what is good and what is injurious, let people choose what they will. 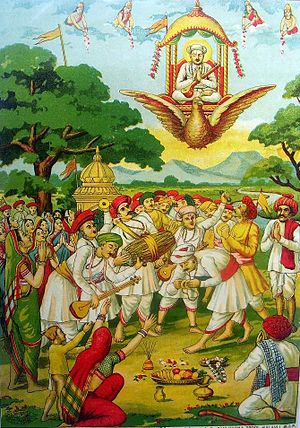 Books and translations of Sant Tukaram

The 18th-century biographer Mahipati, in his four volume compilation of the lives of many Bhakti saints, included Tukaram. Mahipati's treatise has been translated by Justin Abbott.[13][41]

Arun Kolatkar published, in 1966, six volumes of avant-garde translations of Tukaram poems.[13] Ranade has published a critical biography and some selected translation.[46]

Dilip Chitre translated writings of Sant Tukaram into English in the book titled Says Tuka for which he was awarded the Sahitya Akademi award in 1994.[47] A selection of poems of Tukaram has been translated and published by Daniel Ladinsky.[48]