United States Court of Appeals for the District of Columbia Circuit

While it has the smallest geographic jurisdiction of any of the United States courts of appeals, the D.C. Circuit, with eleven active judgeships, is arguably the most important inferior appellate court. The court is given the responsibility of directly reviewing the decisions and rulemaking of many federal independent agencies of the United States government based in the national capital, often without prior hearing by a district court. Aside from the agencies whose statutes explicitly direct review by the D.C. Circuit, the court typically hears cases from other agencies under the more general jurisdiction granted to the Courts of Appeals under the Administrative Procedure Act. Given the broad areas over which federal agencies have power, this often gives the judges of the D.C. Circuit a central role in affecting national U.S. policy and law. Because of this, the D.C. Circuit is often referred to as the second most powerful court in the United States, second only to the Supreme Court[1]

A judgeship on the D.C. Circuit is often thought of as a stepping-stone for appointment to the Supreme Court. As of January 2013, four of the nine justices on the Supreme Court are alumni of the D.C. Circuit: Chief Justice John Roberts and Associate Justices Antonin Scalia, Clarence Thomas, and Ruth Bader Ginsburg. Justice Elena Kagan was nominated by Bill Clinton to the same seat that Roberts would later fill, but was never given a vote in the Senate. In addition, the Reagan Administration put forth two failed nominees in 1987 from the D.C. Circuit: former Judge Robert Bork, who was rejected by the Senate, and former (2001–2008) Chief Judge Douglas H. Ginsburg (no relation to Ruth Bader Ginsburg), who withdrew his nomination after it became known that he had used marijuana as a college student and professor in the 1960s and 1970s. Before the 1980s, Chief Justices Fred M. Vinson and Warren Burger, as well as Associate Justice Wiley Blount Rutledge, served on the D.C. Circuit before their elevations to the Supreme Court. 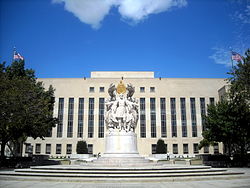 Unlike the Courts of Appeals for the other geographical districts where home-state senators have the privilege of holding up confirmation by the "blue slip" process, because the D.C. Circuit does not represent any state, confirmation of nominees is often procedurally and practically easier. However, in recent years, several nominees were stalled and some were ultimately not confirmed because senators claimed that the court had become larger than necessary to handle its caseload. The court has a history of reversing the Federal Communications Commission's major policy actions.[2]

The United States Court of Appeals for the District of Columbia Circuit meets at the E. Barrett Prettyman Federal Courthouse, near Judiciary Square in downtown Washington, D.C.

From 1984 to 2009, there were twelve seats on the D.C. Circuit. One of those seats was eliminated by the Court Security Improvement Act of 2007 on January 7, 2008, with immediate effect, leaving the number of authorized judgeships at eleven. (The eliminated judgeship was instead assigned to the Ninth Circuit, with the assignment taking effect on January 21, 2009).

Decisions of the U.S. Courts of Appeals are published in the Federal Reporter, an unofficial reporter from Thomson Reuters.[3]

On June 25, 1948, 62 Stat. 869 and 62 Stat. 985 became law. These acts made the Chief Justice a Chief Judge. In 1954, another law, 68 Stat. 1245, clarified what was implicit in those laws: that the Chief Judgeship was not a mere renaming of the position but a change in its status that made it the same as the Chief Judge of other inferior courts.

The court has eleven seats for active judges after the elimination of seat seven under the Court Security Improvement Act of 2007. The seat that was originally the Chief Justiceship is numbered as Seat 1; the other seats are numbered in order of their creation. If seats were established simultaneously, they are numbered in the order in which they were filled. Judges who retire into senior status remain on the bench but leave their seat vacant. That seat is filled by the next circuit judge appointed by the President.