United Daughters of the Confederacy

The United Daughters of the Confederacy, Inc. is an association of female descendants of Confederate veterans. It was founded on September 10, 1894[1] by Mrs. Caroline Meriwether Goodlett of Tennessee as Founder and Mrs. Lucian H. (Anna Davenport) Raines of Georgia as Co- Founder.[2]

Further information: Lost Cause of the Confederacy

The UDC was influential primarily in the early twentieth century across the South, where its main role was to preserve and uphold the memory of the Confederate veterans, especially those husbands, sons, fathers and brothers who died in the war. Its long-term impact was to promote the Lost Cause image of the antebellum plantation South as an idealized society crushed by the forces of Yankee modernization.[3]

Memory and memorials became the central focus.[4] In Missouri, a border state, the United daughters of the Confederacy was active in setting up its own system of memorials in distinction to black memories and Unionist white memories.[5]

Across the Southern United States, associations were founded after the Civil War, chiefly by women, to organize burials of Confederate soldiers, establish and care for permanent cemeteries for Confederate soldiers, organize commemorative ceremonies, and sponsor impressive monuments as a permanent way of remembering the Confederate cause and tradition.[6] They were "strikingly successful at raising money to build Confederate monuments, lobbying legislatures and Congress for the reburial of Confederate dead, and working to shape the content of history textbooks."[7] They also raised money to care for the widows and children of the Confederate dead. Most of these memorial associations eventually merged into the United Daughters of the Confederacy, which grew from 17,000 members in 1900 to nearly 100,000 women by World War I.[8]

Historian Jacquelyn Dowd Hall argues that the UDC was a powerful promoter of women's history:

UDC leaders were determined to assert women's cultural authority over virtually every representation of the region's past. This they did by lobbying for state archives and museums, national historic sites, and historic highways; compiling genealogies; interviewing former soldiers; writing history textbooks; and erecting monuments, which now moved triumphantly from cemeteries into town centers. More than half a century before women's history and public history emerged as fields of inquiry and action, the UDC, with other women's associations, strove to etch women's accomplishments into the historical record and to take history to the people, from the nursery and the fireside to the schoolhouse and the public square.[9]

The organization encouraged women to publish their experiences in the war, beginning with biographies of major southern figures, such as Varina Davis' of her husband Jefferson Davis, president of the Confederacy. Later, women began adding more of their own experiences to the "public discourse about the war", in the form of memoirs, such as those published in the early 1900s by Sara Pryor, Virginia Clopton and Louise Wright and others. They also recommended structures for the memoirs. By the turn of the twentieth century, a dozen memoirs by southern women were published. They constituted part of the growing public memory about the antebellum years and the Lost Cause, as they vigorously defended the Confederacy.[10]

After 1900 the UDC became an umbrella organization coordinating local memorial groups.[11] The goal was to foster and shape public memory across the South by promoting visibility and a positive image of Confederate veterans. The UDC women specialized in sponsoring local monuments to anonymous soldiers. After 1945, they were active in placing historical markers along Southern highways.[12]

The UDC has also been active in national causes during wartime. According to the organization, during World War I, it funded 70 hospital beds at the American Military Hospital on the Western front and contributed $82,000 for French and Belgian war orphans. Homefront campaign raised $24 million for war bonds and savings stamps. Members donated over $800,000 to the Red Cross. During World War II, the U.D.C. gave financial aid to student nurses.

Goals of the group 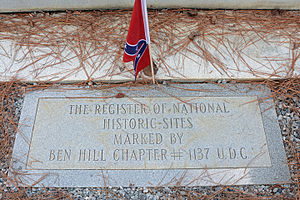 As stated in the Articles of Incorporation of 1894, the Objectives of the society are Historical, Benevolent, Educational, Memorial and Patriotic and include the following goals:

In July 1993, Senator Jesse Helms made several attempts to extend a patent on the United Daughters of the Confederacy insignia, which included the Confederate flag, and needed to be renewed every 14 years. Initially it had been a rider on a bill for Olestra, a fat substitute, but Senator Carol Moseley Braun, then a freshman Senator and the only black one, discovered it and removed it in committee.[14] Helms then introduced it directly onto the Senate floor, proposing an amendment to the national service bill, which would provide educational grants in return for various forms of service. With many senators unaware of what they were voting on, he won a test vote, 52 to 48.

Then Senator Moseley Braun took the floor in outrage at the defense of a symbol of slavery, supported by Senator Daniel Patrick Moynihan.[15] She told the Senate[16]

"On this issue there can be no consensus. It is an outrage. It is an insult. It is absolutely unacceptable to me and to millions of Americans, black or white, that we would put the imprimatur of the United States Senate on a symbol of this kind of idea...This flag is the real flag of the Confederacy."

She said it symbolized the Civil War, "fought to try to preserve our nation, to keep the states from separating themselves over the issue of whether or not my ancestors could be held as property, as chattel, as objects of trade and commerce in this country."

Senator Strom Thurmond rose to support the amendment saying that the UDC "has nothing to do with discrimination."[17]

But Senator Howell Heflin of Alabama supported Moseley Braun, and said his family was "rooted in the Confederacy."[18] He said he thought they "might be spinning in their graves," but he would reverse himself and vote with Senator Moseley Braun, against the flag, because "we live today in a different world... perhaps racism is one of the great scars and one of the most serious illnesses that we still suffer from today."

The Senate was convinced by the argument that the flag was an insult and killed the Helms amendment 75 to 25, as 27 senators changed their votes over three hours.

Senator Helms angrily insisted that his proposal had nothing to do with race or with slavery. "Race should never have been introduced," he said. "It is a political ploy."

Children of the Confederacy 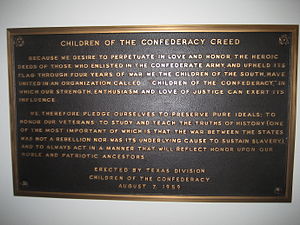 "Children of the Confederacy Creed" plaque at the Texas State Capitol

The UDC has a youth auxiliary called the Children of the Confederacy (CofC). The UDC is open to both males and females "from birth" to the CofC convention after their 18th birthday, who can trace their lineage to a Confederate ancestor, or to a member of the UDC. The group has historically held meetings with veterans, widows and historians of the Civil War, observed Confederate Memorial Days, decorated graves, sponsored scholarships and published pamphlets and catechisms presenting the "Southern version" of the Civil War.[19] Today they also engage in activities such as book drives for Beauvoir, fundraising for the Ronald McDonald House, canned food drives as well as veterans causes.[20][21] The first CoC chapter was organized by the Mary Custis Lee Chapter of the UDC in Alexandria, Virginia in 1896. It was formally incorporated on May 6, 1897. New chapters were established in Virginia and Alabama by 1898.[22]