From Infogalactic: the planetary knowledge core
Jump to: navigation, search
This article is about the current system. For the pre-1912 system, see United States circuit court. 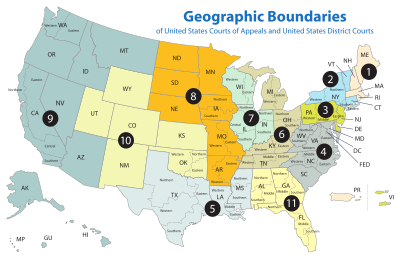 Decisions of the United States courts of appeals have been published by the private company West Publishing in the Federal Reporter series since the courts were established. Only decisions that the courts designate for publication are included. The "unpublished" opinions (of all but the Fifth and Eleventh Circuits) are published separately in West's Federal Appendix, and they are also available in on-line databases like LexisNexis or Westlaw. More recently, court decisions are also available electronically on the official court websites. However, there are also a few federal court decisions that are classified for national security reasons.

The circuit with the smallest number of appellate judges is the First Circuit, and the one with the largest number of appellate judges is the geographically-large and populous Ninth Circuit in the Far West. The number of judges that the U.S. Congress has authorized for each circuit is set forth by law in 28 U.S.C. § 44, while the places where those judges must regularly sit to hear appeals are prescribed in 28 U.S.C. § 48.

Although the courts of appeals are frequently referred to as circuit courts, they should not be confused with the former United States circuit courts, which were active from 1789 to 1911, during the time when long-distance transportation was much less available, and which were primarily first-level federal trial courts that moved periodically from place to place in "circuits" in order to serve the dispersed population in towns and the smaller cities that existed then. The current "courts of appeal" system was established in the Judiciary Act of 1891, also known as the Evarts Act.[Note 1]

Trials, at which witnesses and other evidence are presented to a jury or judge in order to determine the truth or facts regarding a particular case, are held only in courts with original jurisdiction, i.e., courts in which a lawsuit is originally (and properly) filed and which have the power to accept evidence from witnesses and make factual and legal determinations regarding the evidence presented. Such trial courts also determine punishments (in criminal cases) and remedies (in civil cases). Because the courts of appeals possess only appellate jurisdiction, they do not hold trials. Instead, appeals courts review decisions of trial courts for errors of law. Accordingly, an appeals court considers only the record (that is, the papers the parties filed and the transcripts and any exhibits from any trial) from the trial court, and the legal arguments of the parties. These arguments, which are presented in written form, and can range in length from dozens to hundreds of pages and are known as briefs. Sometimes lawyers are permitted to add to their written briefs with oral arguments before the appeals judges. At such hearings, only the parties' lawyers speak to the court.

The rules that govern the procedure in the courts of appeals are the Federal Rules of Appellate Procedure. In a court of appeals, an appeal is almost always heard by a "panel" of three judges who are randomly selected from the available judges (including senior judges and judges temporarily assigned to the circuit). Some cases, however, receive an en banc hearing. Except in the Ninth Circuit Courts, the en banc court consists of all of the circuit judges who are on active status, but it does not include the senior or assigned judges (except that under some circumstances, a senior judge may participate in an en banc hearing when he or she participated at an earlier stage of the same case).

Many decades ago, certain classes of federal court cases held the right of an automatic appeal to the Supreme Court of the United States. That is, one of the parties in the case could appeal a decision of a court of appeals to the Supreme Court, and it had to accept the case. The right of automatic appeal for most types of decisions of a court of appeals was ended by an Act of Congress, the Judiciary Act of 1925. This law was urged by Chief Justice William Howard Taft, and it also reorganized many other things in the federal court system.

The current procedure is that a party in a case may apply to the Supreme Court to review a ruling of the circuit court. This is called petitioning for a writ of certiorari, and the Supreme Court may choose, in its sole discretion, to review any lower court ruling. In extremely rare cases, the Supreme Court may grant the writ of certiorari before the judgment is rendered by the court of appeals, thereby reviewing the lower court's ruling directly. Certiorari before judgment was granted in the Watergate scandal-related case, United States v. Nixon,[2] and in the 2005 decision involving the Federal Sentencing Guidelines, United States v. Booker.[3]

A court of appeals may also pose questions to the Supreme Court for a ruling in the midst of reviewing a case. This procedure was formerly used somewhat commonly, but now it is quite rare. The Second Circuit, sitting en banc, attempted to use this procedure in the case United States v. Penaranda, as a result of the Supreme Court's decision in Blakely v. Washington,[4] but the Supreme Court dismissed the question after resolving the same issue in another case, which had come before the Court through the standard procedure. The last instance of the Supreme Court accepting a set of questions and answering them was in a case in 1982.

Courts of appeals decisions, unlike those of the lower federal courts, establish binding precedents. Other federal courts in that circuit must, from that point forward, follow the appeals court's guidance in similar cases, regardless of whether the trial judge thinks that the case should be decided differently.

Federal and state laws can and do change from time to time, depending on the actions of Congress and the state legislatures. Therefore, the law that exists at the time of the appeal might be different from the law that existed at the time of the events that are in controversy under civil or criminal law in the case at hand. A court of appeals applies the law as it exists at the time of the appeal; otherwise, it would be handing down decisions that would be instantly obsolete, and this would be a waste of time and resources, since such decisions could not be cited as precedent. "[A] court is to apply the law in effect at the time it renders its decision, unless doing so would result in manifest injustice, or there is statutory direction or some legislative history to the contrary."[5]

However, the above rule cannot apply in criminal cases if the effect of applying the newer law would be to create an ex post facto law to the detriment of the defendant.

In order to serve as counsel in a case appealed to a circuit court the attorney must be admitted to the bar of that circuit. Admission to the bar of a circuit court is granted as a matter of course to any attorney who is admitted to practice law in any state of the United States. The attorney submits an application, pays a fee, and takes the oath of admission. Local practice varies as to whether the oath is given in writing or in open court before a judge of the circuit, and most courts of appeals allow the applicant attorney to choose which method he or she prefers.

Judicial councils are panels in each circuit that are charged with making "necessary and appropriate orders for the effective and expeditious administration of justice" within their circuits.[6][7] Among their responsibilities is judicial discipline, the formulation of circuit policy, the implementation of policy directives received from the Judicial Conference of the United States, and the annual submission of a report to the Administrative Office of the United States Courts on the number and nature of orders entered during the year that relate to judicial misconduct.[6][8] Judicial councils consist of the chief judge of the circuit and an equal number of circuit judges and district judges of the circuit.[6][9]

Based on 2010 United States Census figures, the population residing in each circuit is as follows.

The Midnight Judges Act reorganized the districts into six circuits, and created circuit judgeships so that Supreme Court justices would no longer have to ride circuit. This Act, however, was repealed in March 1802, and Congress provided that the former circuit courts would be revived as of July 1 of that year. But it then passed the new Judiciary Act of 1802 in April, so that the revival of the old courts never took effect. The 1802 Act restored circuit riding, but with only one justice to a circuit; it therefore created six new circuits, but with slightly different compositions than the 1801 Act. These six circuits later were augmented by others. Until 1866, each new circuit (except the short-lived California Circuit) was accompanied by a newly created Supreme Court seat.