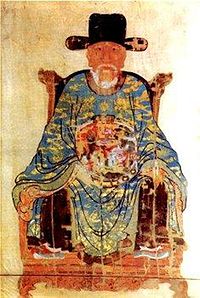 Confucianism entered Vietnam and was later reinforced in the four Bắc thuộc periods of Chinese domination, beginning with the first Chinese domination of Vietnam from 111 BCE.[1] This was also the beginning of Taoism in Vietnam and Buddhism in Vietnam. Confucianism was reinforced in government by the Confucian examination system in Vietnam, as well as the way family raised and taught children toward filial piety, through absolute obedience.[2]